The keyword static can be applied to a variable declaration to give the variable static storage class (see Section 20.3).

static class members are preferable to (and can generally replace the use of) global variables because they do not pollute the global namespace.

static data members must be declared static in (and only in) the class definition.

The class UML diagram for Thing is shown in Figure 2.3. Notice that the static members are underlined in the diagram. 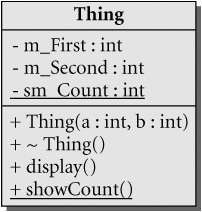 Each static data member must be initialized (defined) outside the class definition, preferably in the class implementation file (not a header file) as shown in Example 2.12.[5]

[5] The exception to this rule is a static const int, which can be initialized in the class definition.

statics that are defined inside a function or a block of code are initialized when they are executed for the first time.

The first call to nextNumber() initializes localvar to 24 and nmber to 1000, displays 1124 on the screen, and returns 1001. When the function returns, localvar is destroyed but nmber is not destroyed. Each time that this function is called, localvar gets created and initialized to 24 again. The static variable nmber persists between calls and holds onto the value that it obtained in the last call. So, for example, the next time the function is called, 1025 is displayed and 1002 is returned.

A static object that is not defined in a block or function is initialized when its corresponding object module (see Section 7.1) is loaded for the first time. Most of the time, this is at program startup, before main() starts. The order in which modules get loaded and variables get initialized is implementation dependent.

A static object is constructed once and persists until the program terminates. A static data member is a static object that has class scope.

In Example 2.13, we make use of an internal block so that we can introduce some local objects that will be destroyed before the program ends.

Here is the compile and run.