A collection of questions and blanks to fill in the answers is called a form. Quite common in GUI applications, a form is used whenever a series of questions needs to be asked of the user. There are many ways to design and implement forms. In this section, we will make a model for the form, and then a view for it.

The model created in Example 17.1 represents a form containing questions of different "types," where the first two are simple string inputs, but the last two are constrained to a set of possible values. The main program creates a model and a view, and hooks them together. In Example 17.2, you can think of main as the controller.

In Example 17.2, you can think of main as the controller.

The FormDialog below is automatically generated from the model above, even though it does not depend on the specific model.

The dialog embeds a FormView, which contains the actual input widgets.

In the Doxygen collaboration diagram in Figure 17.2, there is a 1:1 correspondence between InputField and Question, but the classes are strictly decoupled.[1]

[1] "Strictly decoupled" means that they know nothing about each other.

A Question models (ideally) all of the information needed by FormFactory to create an appropriate InputField. A FormView is a grouping of input widgets. An input widget serves as a proxy, or delegate, between Qt input widgets and Question-derived models.

Figure 17.3 shows that an InputField can be a variety of things. Because Qt input widgets[2] do not have a common QVariant-based interface for getting and setting data, the InputField serves as an adaptor, that provides a property-like interface. InputField uses the Strategy pattern to organize the getters and setters for different types as virtual functions. 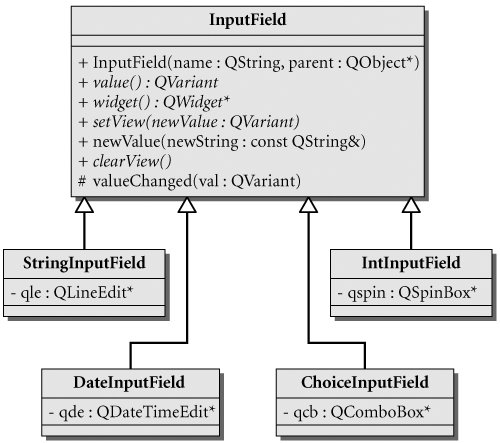 With a hierarchy of views, we end up with an extensible framework for adding other kinds of InputFields later.

The FormModel and the Question classes, shown in Figure 17.4, are two adjoining layers in the model. Because they are models, they are meant to be very simple classes, holding data but containing no GUI or controller code. 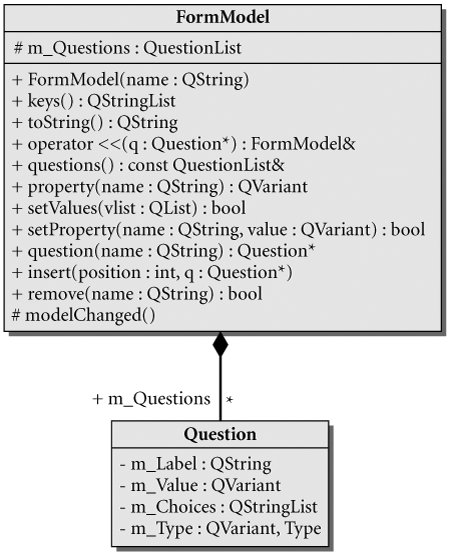 FormModel provides a simple operation, setValues(), for updating all of its Question's values, shown in Example 17.3.

Question encapsulates all the things that are needed for an interaction with a user, including the type and value of the expected answer. The constructors, declared in Example 17.4, are protected because we will use a factory to create Question objects.

When we need a Question instance, FormFactory creates it by using one of the protected constructors, defined in Example 17.5.

The view classes, shown in Figure 17.5, are separated into three layers. 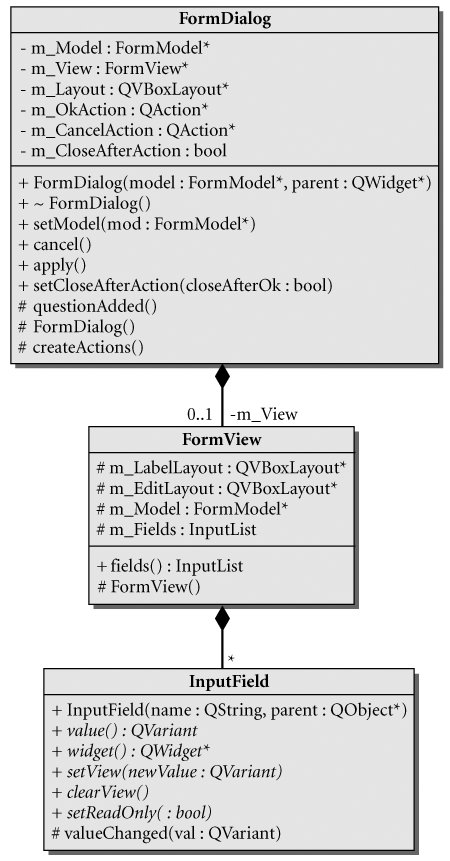 FormView can be automatically created from a FormModel without any knowledge of the individual InputField or Question types. This is thanks to the createEditor Factory method, used in Example 17.6, which returns polymorphic objects.

The specific InputField types that get created depend on the type of the Question passed in, and that is determined in FormFactory, shown in Example 17.7.

In Example 17.7, notice the switch statement, which is normally to be avoided in object-oriented code. We have it here to map polymorphically from the QVariant::Type (an enumerated value) to an InputField class. This makes it possible for us to use the Strategy pattern on InputField (which provides input and output in various ways, on various types).

By default, createEditor() returns a StringInputField, shown in Example 17.8. It has a simple QLineEdit as its input widget.

It is possible there will be other "types" of data that correspond to different kinds of input widgets, but are not among those defined in QVariant. In Example 17.9, we introduce user-defined enumerated values above QVariant (127) that will not share a value with those already predefined in QVariant::Type.

A directory can be encoded and decoded as a QString quite naturally, but a Question with a Variant::Directory as its type gives a hint to the FormFactory that the input widget it creates should be a QFileDialog that is already in "directory-chooser" mode.

The DirInputField, defined in Example 17.10, extends the StringInputField and still has the QLineEdit for accepting a string from the user. In addition, there is a Browse button, which when clicked will pop up a QFileDialog pre-set to accept only a directory as a valid selection.

In this section, we discuss issues of synchronizing data between the model and the view. Since these methods depend on both model and view, we are going to isolate them from both, in their own controller classes. In Example 17.11, we derived two custom QAction classes, each responsible for synchronizing in one direction.

These actions are in fact delegates, and perform a similar function to Qt's QItemDelegate.

In Example 17.1, we extended FormModel, and in the constructor we created and added Question objects to compose a custom form. The FormModel itself can be used in other ways, including those listed below.

We wish to create a FormModel from a DataObject, so this means that another function goes into the ModelFactory. We extended Question, the basic FormModel building block, so that it would get/set values from/to a DataObject property instead of its own m_Value.

PropQuestion, shown in Figure 17.6, serves as a proxy or delegate between a DataObject property and an InputField widget. We see this in Example 17.13: Most of the methods simply pass on the request to the underlying DataObject, mDest. 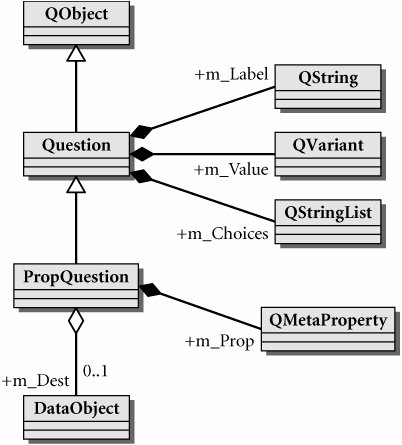 Example 17.14 uses the DataObject model applied to the FileTagger class to auto-generate a form, which looks like Figure 17.7. 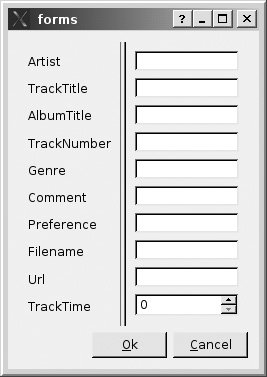 The newForm Factory method defined in Example 17.15 simply returns a PropQuestion instead of a Question when it is creating the FormModel from a DataObject.

I am the keeper of the bridge of death