Most QApplications manage a single QMainWindow. As Figure 11.4 shows, the QMainWindow has some features that are common to most desktop applications: 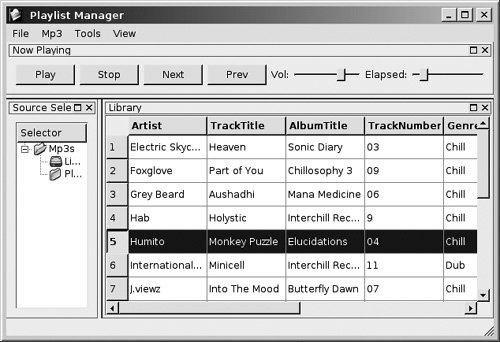 Because the QMainWindow is the parent of all other widgets (in that main window), it is common practice to extend that class for some applications, as shown in Example 11.1.

All modern desktop applications have a way for users to configure the settings. The settings/preferences/options need to be persistent. The mechanism for that is included with QSettings. As you develop a new QMainWindow application, the first persistent settings you may want to save will probably be the window size and position. You may also want to save the names of the most recent documents that were opened by the application.

QSettings is a persistent map of key/value pairs. It is a QObject and uses QObject's property interface, setValue() and value(), to set and get its values. It can be used to store any data that needs to be remembered across multiple executions.

The QSettings constructor has two QString parameters: one for the organization name and one for the application name. You can establish defaults for these values with the two QCoreApplication functions, setOrganizationName() and setApplicationName(), after which you can use the default QSettings constructor. Each combination of names defines a unique persistent map that does not clash with settings from other-named Qt applications.

The actual mechanism for the persistent storage of QSettings data is implementation dependent and quite flexible. Some possibilities for its storage include the Win32 registry (in Windows) and your $HOME/.qt directory (in Linux). For more detailed information, see the Qt QSettings API documentation.

QMainWindow::saveState() returns a QByteArray that contains information about the main window's toolbars and dockwidgets. To do this it makes use of the objectName property for each of those subwidgets, thus making it important that each name be unique. saveState() has an optional int versionNumber parameter. The QSettings object stores that QByteArray with the key string "state".

QMainWindow::restoreState() takes a QByteArray, presumably created by saveState(), and uses the information that it holds to put the toolbars and dockwidgets into a prior arrangement. It too has an optional versionNumber parameter. We show the use of these functions in Example 11.2.

By placing the "root program logic" in a derived class of QMainWindow or QApplication, the main() becomes quite simple, as shown in Example 11.3.