C and C++ distinguish themselves from many other languages by permitting direct access to memory through the use of pointers. This section explains the basic pointer operations and modifiers, and introduces dynamic memory usage. Pointers can seem complicated at first. We discuss pointer use and misuse in more detail in Chapter 22.

A variable is an object with a name recognized by the compiler. A variable's name can be used as if it is the object itself. For example, if we say:

An object that holds the memory address of another object is called a pointer. We say that the pointer points to the object at the stored memory address.

In this example, y points to the integer x. The asterisk * following the int indicates that y is a pointer to int. Here we have initialized the int pointer y to the address of the int variable x. One of the powerful features of pointers is that, subject to rules that we will explore shortly, it is possible for a pointer of one type to hold the address of an object of a different (but related) type.

Zero (0), often represented by the macro NULL in C programs, is a special value that can be legally assigned to a pointer, usually when it is being initialized (or re-initialized). 0 is not the address of any object. A pointer that stores the value 0 is called a null pointer. Stroustrup recommends the use of 0 rather than the macro NULL in C++ programs.

The unary * operator, also known as the dereference operator, when applied to a non-null pointer returns the object at the address stored by the pointer.

The particular values of the addresses will, of course, be different when the code in Example 1.19 is executed on different machines.

The variable x accesses its data directly, but the variable px accesses the same data indirectly. This is why the word indirection is often used to characterize the process of accessing data through a pointer. The relationship between the two variables, x and px, is illustrated in Figure 1.1. 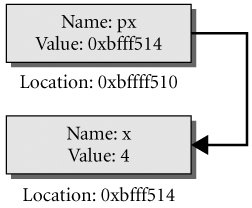 C++ has a mechanism that permits storage to be allocated dynamically at runtime. This means that the programmer does not need to anticipate the memory needs of a program in advance and make allowances for the maximum amount of memory that might be needed by the program. Dynamic allocation of storage at runtime is a powerful tool that helps to build programs that are efficient and flexible.

The new operator allocates storage from the memory heap (also called the heap, free pool, or free storage) and returns a pointer to the newly allocated object. If for some reason it is not possible for the memory to be allocated, an exception is thrown (see Section 22.9).

The delete operator releases dynamically allocated memory and returns it to the memory heap. delete should be applied only to pointers returned by the new, or to null pointers. Heap memory that is no longer needed should be released for reuse. Failure to do so can result in crippling memory leaks.

The syntax of the new and delete operators is demonstrated in the code fragment shown in Example 1.20.