You want to create a native Mac OS X program with a graphical user interface.

Use the Mac OS X Cocoa library along with RubyCocoa and the Interface Builder application. RubyCocoa creates real OS X applications and provides a GUI interface for building GUIs, as opposed to other libraries, which make you define the GUI with Ruby code. RubyCocoa is a free download, and the Cocoa development tools are on the Mac OS X installation DVD.

The screenshot in Figure 21-8 shows what we e going to do to our new application window (seen in the upper left). 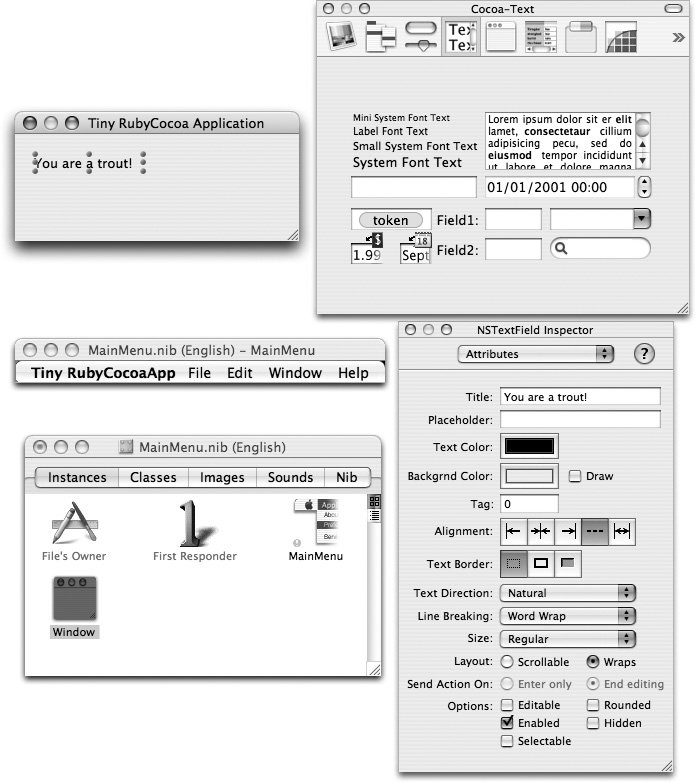 A compiled, doubleclickable version of the application will be found in your project build folderusually within the project subfolder.

This simple application doesn show much about RubyCocoa, but it gives a glimpse of the power of the Cocoa framework. The NSApplication class gives you a lot of functionality for free: spellchecking, printing, application hiding, and so on. Ruby-Cocoa creates an instance of NSApplication, which deals with the run loop, handling events from the operating system, and more. You could have created this GUI application entirely in code (it would have looked something like the Tk example), but in practice, programmers always use Interface Builder.

For a more realistic example, well need to write some code that interacts with the interface. Like Rails and many other modern frameworks, Cocoa uses a Model-View-Controller pattern.

Lets create a RubyCocoa version of the Stopwatch program seen in previous GUI recipes like Recipe 21.12. First, we need to create a new Cocoa-Ruby Application project in Xcode, and once more open the MainMenu.nib file in Interface Builder. Because RubyCocoa makes it easy, well display the time on the stopwatch two ways: as a digital readout and as an analog clock face (Figure 21-10). 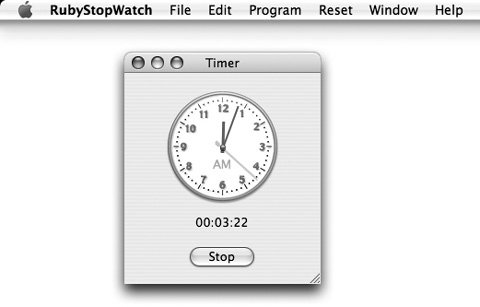 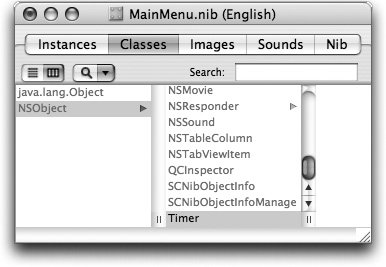 Select NSObject and then "Subclass NSObject" from the Classes menu. Change the name of the new class to Timer. This class will implement the stopwatch code.

We need to tell Interface Builder about the interface to this class. Start by specifying three methods. In the inspector, with the new class still selected in the class browser, make sure that the Attributes-Actions tab is selected and hit the Add button three times. Name the methods reset:, start:, and stop:. These are the methods that will be called from the button and menus.

The model class we are creating also needs to know about some interface elements; for instance, it needs to know about the time controls so it can change the displayed time. The model class accesses Interface Builder widgets through instance variables called outlets. Switch to the "Attributes-Outlets" tab and click Add tHRee times. Name the outlets clock, timeField, and button.

Back in Xcode, we are finally ready to write the Ruby code that actually implements the stopwatch. Choose "New File…" from the File menu, and then select "Ruby-Cocoa NSObject subclass" from the list. The core model object code is very similar to the Tk recipe, with some small differences:


First, we call the ib_outlets decorator to specify instance variables that are matched up with the objects specified in Interface Builder.

In the other GUI examples, we displayed a plaintext label and formatted the time as a string for display. Here, the label has its own date formatter, so we can tell it to display an NSDate object and have it figure out the formatting on its own.

NSTimer is a Cocoa class we can use to tap into the Mac OS X user-event loop and call a method at a certain interval. We can get submillisecond time intervals from NSTimer, but theres not much point because NSDate won display fractions of a second. So we set it up to call the tick method once a second.[5]

[5] If, as in the other GUI recipes, wed decided to format the time ourselves and display it as a string, we could set a shorter interval and make the fractions of a second whiz by.

Now we define the start method, triggered when the end user pushes the "Start" button:


One thing to note here: NSTimer hooks into the operating systems event loop, which means it can be switched off. We define a @running variable so we know to ignore the timer when we are not running the stopwatch.

The rest of the code is similar to the other GUI examples:


This recipe is pretty long-winded compared to the other GUI recipes, but thats because it takes more words to explain how to use a GUI application than to explain how a block of Ruby code works. Once you e familiar with Interface Builder, you can create complex Cocoa applications very quickly.

The combination of Ruby and Cocoa can make you very productive. Cocoa is a very big class library, and the GUI part, called AppKit, is only a part of it. There are classes for speech recognition, Bluetooth, disc recording, HTML rendering (Web-Kit), database (Core Data), graphics, audio, and much more. The disadvantage is that a RubyCocoa program is tied to Mac OS X, unlike Tk or wxRuby, which will work on Windows and Linux as well.

With Apples recent change to Intel processors, youll want to create "universal binaries" for your application, so that your users can run it natively whether they have a PowerPC or an Intel Mac. The Ruby code doesn need to change, because Ruby is an interpreted language; but a RubyCocoa application also contains Objective-C code, which must be compiled separately for each architecture.

To make a universal binary, select the top-most group in the "Groups & Files" list in Xcode (the one with the name of your project). Get Info on this (Command-I), go to the "Build" tab, select "Architectures", and click the Edit button. Select both the PowerPC and Intel checkboxes, and your packaged application will include compiled code for both architectures.