You want to create a set of API documentation for your application. You might want to go so far as to keep all your documentation in the same files as your source code.

Its good programming practice to preface each of your methods, classes, and modules with a comment that lets the reader know whats going on. Ruby rewards this behavior by making it easy to transform those comments into a set of HTML pages that document your code. This is similar to Javas JavaDoc, Pythons PyDoc, and Perls Pod.

Heres a simple example. Suppose your application contains only one file, sum.rb, which defines only one method:


Change into the directory containing the sum.rb file, and run the rdoc command.

The index.html file in the doc/ subdirectory is a frameset that lets users navigate the files of your application. Since the example only uses one file (sum.rb), the most interesting thing about its generated documentation is what RDoc has done with the comments (Figure 17-1).

RDoc parses a set of Ruby files, cross-references them, and generates a web site that captures the class and module structure, and the comments you wrote while you were coding.

Notice that when I wrote examples for the sum method, I indented them a little from the text above them: 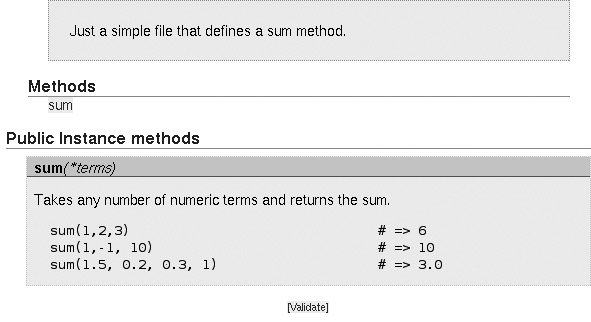 RDoc picked up on this extra indentation and displayed my examples as Ruby code, in a fixed-width font. This is one of many RDoc conventions for improving the looks of the rendered HTML. As with wiki markup, the goal of the RDoc conventions is to allow text to render nicely as HTML while being easy to read and edit as plain text (Figure 17-2). 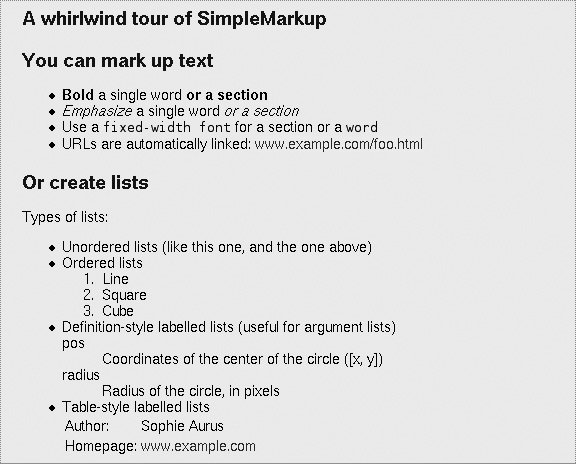 There are also several special RDoc directives that go into comments on the same line as a method, class, or module definition. The most common is :nodoc:, which is used if you want to hide something from RDoc. You can and should put an RDoc-style comment even on a :nodoc: method or class, so that people reading your Ruby code will know what it does.


If a comment mentions another class, method, or source file, RDoc will try to locate and turn it into a hyperlinked cross-reference. To indicate that a method name is a method name and not just a random word, prefix it with a hash symbol or use its fully qualified name (MyClass.class_method or MyClass#instance_method:


Other ways of creating RDoc

The Ruby gem installation process generates a set of RDoc files for every gem it installs. If you package your software as a gem, anyone who installs it will automatically get the RDoc files as well.

You can also create RDoc files programatically from a Ruby program, by creating and scripting RDoc objects. The rdoc command itself is nothing more than Ruby code such as the following, along with some error handling: