Partitioning or Classifying a Set

Use Set#divide, passing in a code block that returns the partition of the object it's passed. The result will be a new Set containing a number of partitioned subsets of your original Set.

The code block can accept either a single argument or two arguments.[3] The single-argument version examines each object to see which subset it should go into.

For the two-argument code block version of Set#divide, the code block should return true if both the arguments it has been passed should be put into the same subset.

If you want to classify the subsets by the values they have in common, use Set#classify instead of Set#divide. It works like Set#divide, but it returns a hash that maps the names of the subsets to the subsets themselves. 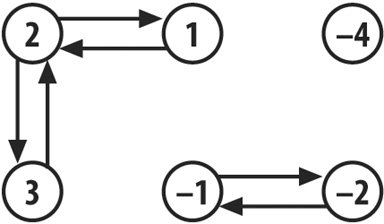 In most real-world scenarios (including all the examples above), the one-way arrows will be symmetrical: if the code returns true for |x,y|, it will also return true for |y,x|. Set#divide will work even if this isn't true. Consider a Set and a divide code block like the following: 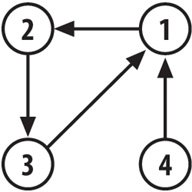 You can get to any other node from 4 by following one-way arrows, but you can't get to 4 from any of the other nodes. This puts 4 is in a strongly connected componentand a Set partitionall by itself. 1, 2, and 3 form a second strongly connected componentand a second Set partitionbecause you can get from any of them to any of them by following one-way arrows.

If you're starting with an array instead of a Set, it's easy to simulate Set#classify (and the single-argument block form of Set#divide)with a hash. In fact, the code below is almost identical to the current Ruby implementation of Set#classify.

There's no simple way to implement a version of Array#divide that takes a two-argument block. The TSort class is Set-like, in that it won't create two different nodes for the same object. The simplest solution is to convert the array into a Set to remove any duplicate values, divide the Set normally, then convert the partitioned subsets into arrays, adding back the duplicate values as you go:

Is it worth it? You decide.