You need to compute certain percentiles of a set of data and you'd also like to compute the rank of certain values in the dataset.

Use the built-in functions PERCENTILE, RANK, and PERCENTRANK. Or you can use the Rank and Percentile tool available in the Analysis ToolPak.

If you'd like to compute the rank of a value in percentage terms, then use the PERCENTRANK function. For example, =PERCENTRANK(C18:C28,2,2) returns the rank of the value 2 as 20%. The second argument in this function call represents the value whose rank is sought. The third argument is the number of significant digits for the result (in this case, two significant digits).

Instead of using these built-in functions, you could use the Analysis ToolPak's Rank and Percentile tool. Select Tools

In the Input Range field, type (or select from your spreadsheet) the cell range containing the input dataset you'd like to rank. You can also specify the output location, as shown in Figure 5-14. 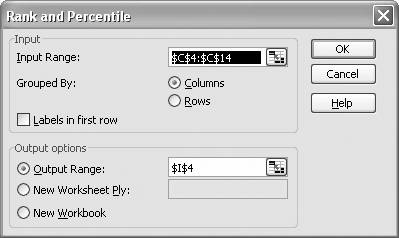 For the simple example dataset discussed earlier, the Rank and Percentile tool returns the results shown in Figure 5-15.

In the event of ties (that is, where two or more values in the dataset are the same), you may want to use the correction recommended in Excel's help file for computing ranks. The formula to use is =[COUNT(data)+1-RANK(value, data, 0)-RANK(value, data, 1)]/2. In this formula, data is a cell reference containing the input dataset and value is the value for which you want to find a rank. See the Excel help topic for the RANK function for more information. To the best of my knowledge, the Rank and Percentile tool in the Analysis ToolPak does not handle ties. So if your data contains ties and you need to correct for this, you should use the RANK function instead. 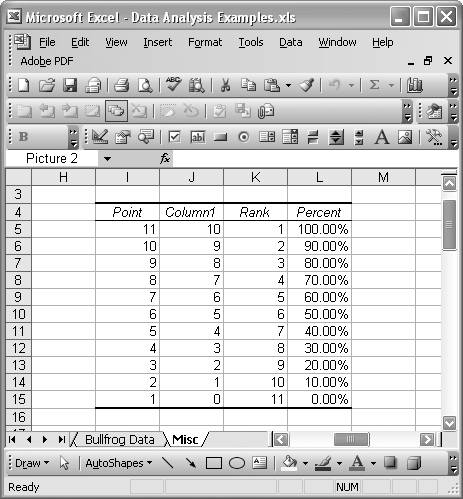