Computing the Center of an Area Using Numerical Integration

You need to integrate a function represented by tabular values to determine the area enclosed by the function and the center of that area.

Apply a numerical integration technique in your spreadsheet (as discussed in earlier recipes) to compute the area, and take the first moment of the area to compute the centroid.

In this recipe, we'll consider the first moment of an area, which is computed according to the formula:

This formula yields the first moment of the area about the y-axis. The center of area is computed according to the formula:

In this formula, My is the first moment of the area and A is the area.

Now, let's consider an example. This time, instead of using the trapezoidal rule, I'll use another common integration rule known as Simpson's rule .

The general formula for Simpson's rule is:

In this example, we're not dealing with a known analytic function. Instead we have tabular y-values corresponding to a set of x-values. In the real world, these could be measured coordinates from some geometry, or experimentally obtain data, for example.

Calculating the area under this curve proceeds in a manner similar to that discussed earlier in Recipe 10.1. Area is computed in cell C19 using the formula =C17/3*SUMPRODUCT(C5:C15,D5:D15). Here again, I use the SUMPRODUCT formula to simultaneously sum the products of the x- and y-values. 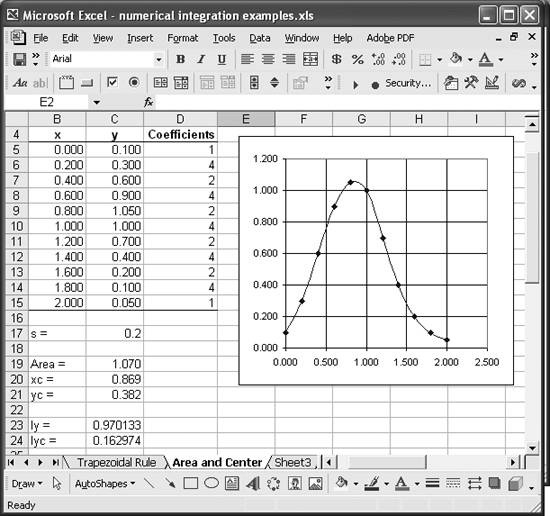 The x-coordinate of the center of area is computed in cell C20 using the formula =(C17/3*SUMPRODUCT(B5:B15,C5:C15,D5:D15))/C19. The numerator in this formula computes the first moment of the area about the y-axis using Simpson's rule. This is achieved by again using the SUMPRODUCT formula to compute the sum of the products of x, y, and the coefficients. Dividing by the area, contained in cell C19, yields the x-coordinate to the center of area relative to the origin.

The y-coordinate of the center of area is computed in a similar manner in cell C21 using the formula =(C17/3*SUMPRODUCT(C5:C15,C5:C15/2,D5:D15))/C19. This formula is generally similar to the one used to compute the x-coordinate; however, this time you don't use the x-value at all. To compute the first moment about the x-axis, you multiply the y-value by the distance from the x-axis to the center of the ordinate, which is just half of y. Take a look at the third parameter in the SUMPRODUCT term; it includes a cell range divided by 2. Excel interprets this as an instruction to divide each value in the cell range C5:C15 by 2 before multiplying it by the other values from the other ranges in the SUMPRODUCT function. This is convenient, as it saves having to set up another column of data to compute y/2.

Dividing the first moment of the area about the x-axis by the area yields the y-coordinate to the center of area. The result is shown in cell C21 in Figure 10-2.

You can easily extend the example discussed here to compute the second moment of the area. See Recipe 10.4 for more information.