You're working with a time series that shows some seasonal variation and you'd like to compute the seasonal indices prior to deseasonalizing the data.

You can compute seasonal indices using any of a number of methods. I'll show you how easy it is to compute such indices in Excel using the average-percentage method.

Take a look at the time series shown in Figure 6-23. 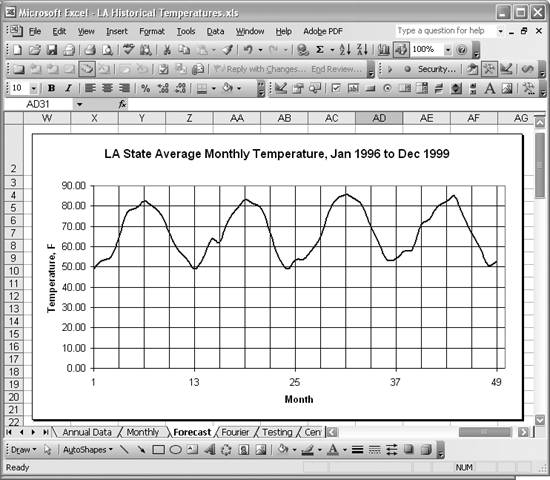 There are many standard methods for computing seasonal indices. The method I'll show you to illustrate how to use Excel for such calculations is the average-percentage method.

The data shown in Figure 6-23 was given as a series of temperature values over a range of months from 1 to 49, covering the years 1996 to 1999. To compute the seasonal indices, it's convenient to reorganize the data as shown in Figure 6-24. 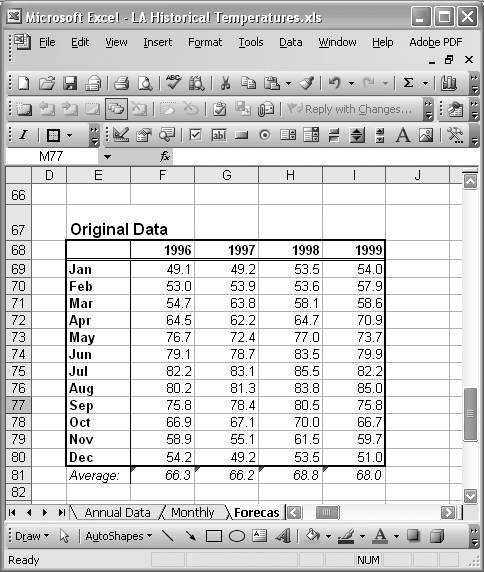 The original data is now in a table with rows representing monthly values over years represented by columns. Now it's a simple matter of applying the AVERAGE worksheet formula to compute annual averages. The last row of the table in Figure 6-24 computes these averages using formulas of the form =AVERAGE(F69:F80).

The next step is to divide each monthly temperature value by the annual average for the corresponding year. Figure 6-25 shows the table I set up for this calculation. 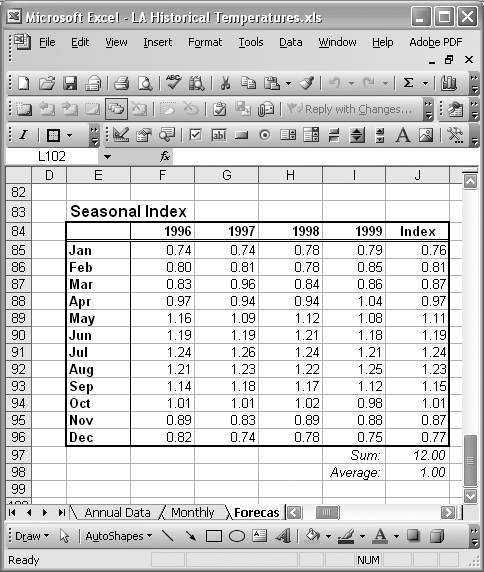 The last column in Figure 6-25 contains the seasonal index for each month. The seasonal index is simply the average of the ratios for the corresponding month over all years. For example, the January seasonal index in cell J85 is computed using the formula =AVERAGE(F85:I85). The remaining indices are computed similarly.

The seasonal indices computed here confirm the observation made earlier that the temperatures are seasonally higher in the middle months of the year (over the second and third quarters of each year). You can see this by observing that the seasonal indices for the months of May through October are above the average index of 1, while the remaining indices are below this average.

You can decompose a time series such as the one discussed here to isolate the seasonal variation in a manner similar to the way in which we isolated the long-term trend in Recipe 6.6. Further, as you can also deseasonalize a time series. The next recipe shows you how.