You're considering two different projects that will generate cash flow streams over a period of years, and each project requires some start-up costs. You want to decide which project offers the highest present value (making it the more attractive option).

You can set up a cash flow table rather easily using basic spreadsheet functions. Further, you can use the time value of money formulas discussed to discount the future values to present dollars, forming a present value basis of comparison.

If you sum the initial outlay and cash flows for each project, you'll find the sum is $8,000 for each project. Therefore, it would seem they are both equally attractive. However, the story is somewhat different when you consider the time value of money.

What's required is to discount the future cash flow values using the PV function (see Recipe 14.1) to derive cash flow sums for each project in terms of present dollars. Figure 14-1 shows a simple spreadsheet I set up to make these calculations. 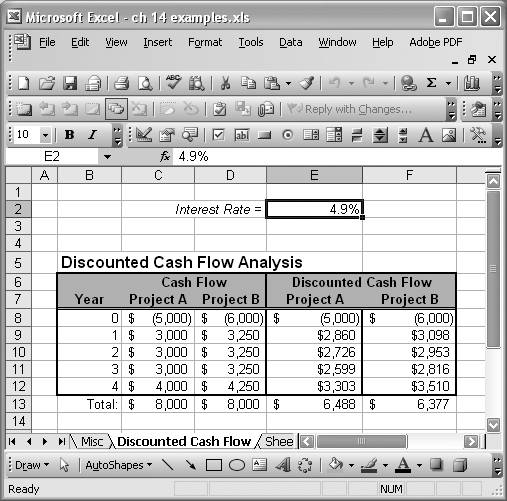 Cell E2 contains the interest rate (4.9%) to be used as the first argument in calls to PV.

The cash flow value for year 0 is not discounted, whereas the cash flows for years 1 through 4 are discounted. The formulas in these cells look like =PV($E$2,$B9,0,-C9,0). The first argument is the interest rate contained in cell E2. The second argument refers to the corresponding year for the particular cash flow value, which is passed in as the fourth argument. I took the negative of the cash flow value so the discounted results come out positive.

The totals in the last row of the table are computed using the SUM formula (see Chapter 7). As it turns out, project A's present value is higher than that of project B. The difference is about 2% and makes project A the more attractive option even though when you look at the nondiscounted cash flows, they both appear to generate the same total cash flow.

Excel offers a function called NPV that discounts a series of cash flow values in one function call. See Recipe 14.8 for more information.