You're working with a multivariable problem and want to compute the correlation coefficient between variables.

Use Excel's built-in functions CORREL or PEARSON, or use the Correlation tool available in the Analysis ToolPak.

Excel provides two built-in functions that allow you to compute the Pearson product-moment correlation coefficients between variables. These functions are CORREL and PEARSON and, according to Excel's help documents, they perform exactly the same calculation. (I've no idea why there are two functions to do the same thing.)

Figure 5-8 shows the data from the multiple linear regression example I discuss in Chapter 8. For now, I'll show you how to examine the correlation between independent variablesthe x variablesusing Excel's correlation functions as well as the Analysis ToolPak.

To compute the correlation coefficient between variables x1 and x2, you can use the cell formula =CORREL(E7:E22,F7:F22) or =PEARSON(E7:E22,F7:F22). They both produce the same results, which is 0.991589. Clearly, these two variables are positively correlated and in a regression analysis, for example, you would probably exclude one of these variables from the curve fit. You can compute correlation coefficients between the other variables in a similar manner. 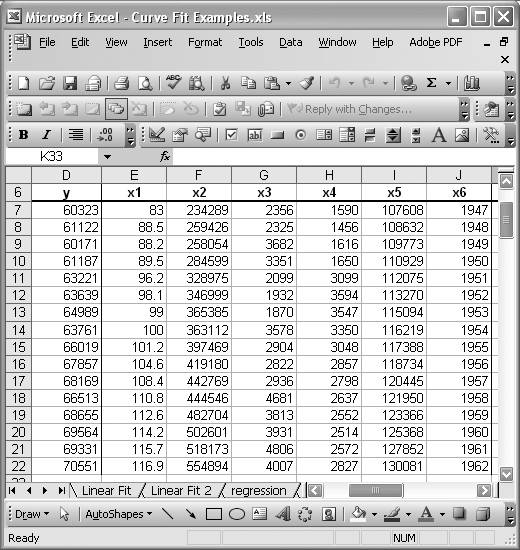 To save some time when dealing with numerous variables, you might consider using the Correlation tool available in the Analysis ToolPak. Select Tools 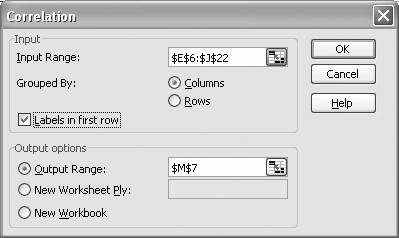 The Correlation tool allows you to select multiple datasets at once; it will compute the correlation coefficients between all the datasets. For example, in Figure 5-10 I entered cells E6 through J22 in the Input Range. This cell range includes all of the x variables shown in Figure 5-8. I included the header labels in the input range, so I checked the "Labels in first row" option. Further, I specified cell M7 (on the same worksheet) as the starting cell where I'd like the output displayed. Figure 5-11 shows the results. 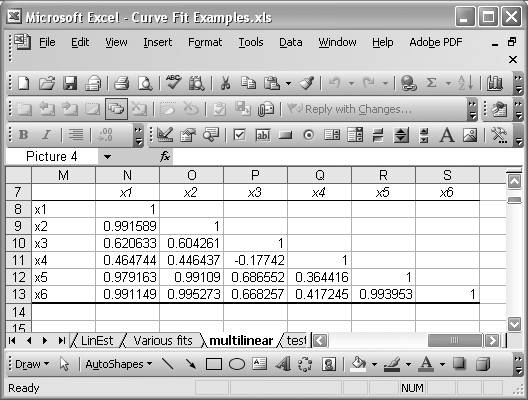 The first two columns in the table contain the raw data. The third and fourth columns contain the rank of each data point. I used the RANK function for these calculations. For example, cell E41 contains the cell formula =RANK(C41,$C$41:$C$56,1), which computes the rank for the first x1 value, assuming the data are sorted in ascending order (see Recipe 5.5).

The formula for computing the Pearson rank correlation coefficient is:

Here, d is the difference in ranks between corresponding values for both x1 and x2, and N is the number of data points. You can compute N using the COUNT function. Cell D58 contains the formula =COUNT(D41:D56) which returns a value of 16 for the number of points.

To compute d2, I set up another column containing formulas like =(E41-F41)^2. The results are shown in the last column of the table shown in Figure 5-12. 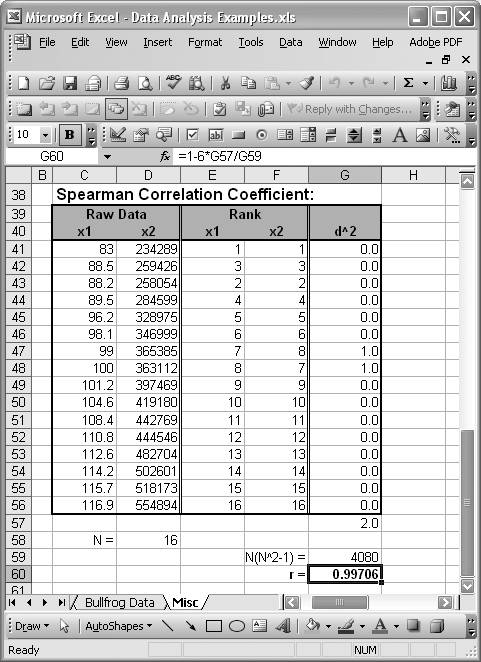 Take a look at Recipe 8.4 to see the resulting regression model for this example dataset. Chapter 8 also discusses coefficients of determination in the context of least-squares curve fitting.

Read Recipe 5.5 to learn more about RANK and other ranking functions.