You'd like to smooth a set of time series data by computing moving averages.

As mentioned in Recipe 6.2, you can add a trendline to a chart by selecting the data series and then right-clicking to reveal a pop-up menu. You can then select Add Trendline to open the Add Trendline dialog box shown in Figure 6-4. 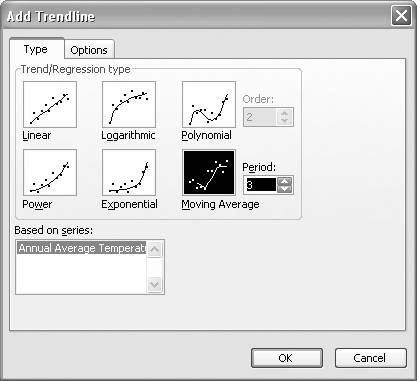 You can select from six different types of trendlines. In this case, select the Moving Average type. To the right of the Moving Average icon, you should see a Period spinner control (as shown in the figure). Use the spinner arrows to select the period over which averages will be computed. You can also type in a number. In this example, I entered 3 so as to create a three-year moving average trendline. 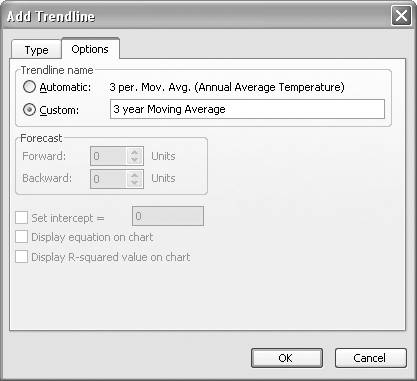 Pressing OK closes the Add Trendline dialog box and adds the new trendline to your chart. Figure 6-6 shows the time series from Figure 6-2 and Figure 6-3 with a three-year moving average trendline. 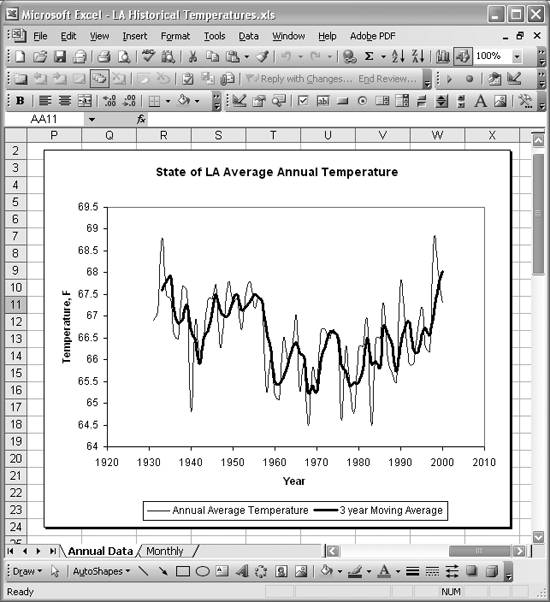 Chart trendlines offer an easy way of creating moving average trendlines for time series data. However, this method does not allow you to extract the actual numerical values representing the moving average trendline. Also, this method requires that you first create a chart of your data. If you need numerical values for the trendline or you don't want to create a chart, then you can use one of the two following approaches.

To compute moving averages for a data series, select Tools 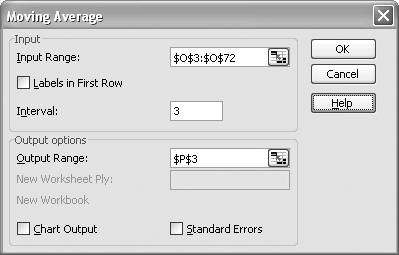 In the Input Range field, enter (or select directly on your spreadsheet) the cell range containing the y values of the data series for which you'd like to compute moving averages. For my example, cells O3 to O72 contained the relevant data.

Next, enter the Interval over which you'd like to compute averages. This is the same as the Period field used in the Trendline dialog box, as discussed earlier.

Finally, enter the topmost cell in the range where you'd like the output created. In this case I selected cell P3, to place the moving average data adjacent to the original time series data.

You may also elect to have a chart created automatically or have standard errors computed. Press OK to close the Moving Average dialog box and create the data. Your spreadsheet will now contain the new moving average data. Figure 6-9 shows a portion of the average annual temperature data series shown in Figure 6-6, along with the computed moving averages. 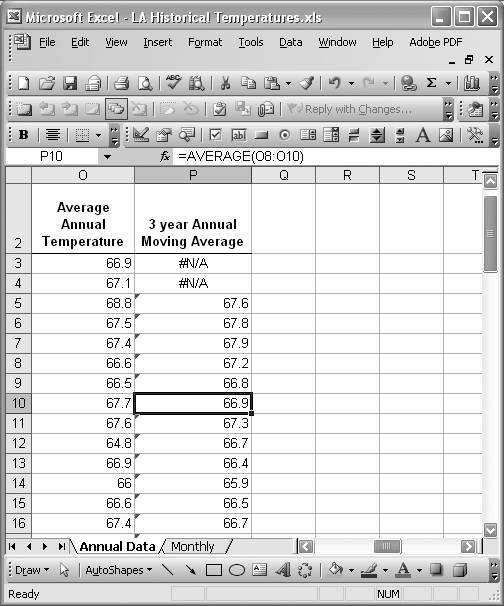 Notice that the first two entries in the moving average series are #N/A. This is because the Moving Average tool computes moving averages based on the previous data points, and there are not enough points to compute the three-year average at the beginning of the series.

At this point, you can perform other spreadsheet operations on the moving average data or plot the data as you wish. This approach gives you greater flexibility, as opposed to the trendline moving average method discussed earlier. However, what if you want to compute the moving averages over a period centered about each data point in the original series? You can use spreadsheet formulas to accomplish this, as discussed in the next section.

Aside from the two previous approaches, you can always use simple spreadsheet formulas to compute moving averages. Specifically, you can use the AVERAGE formula, as shown in Figure 6-10. 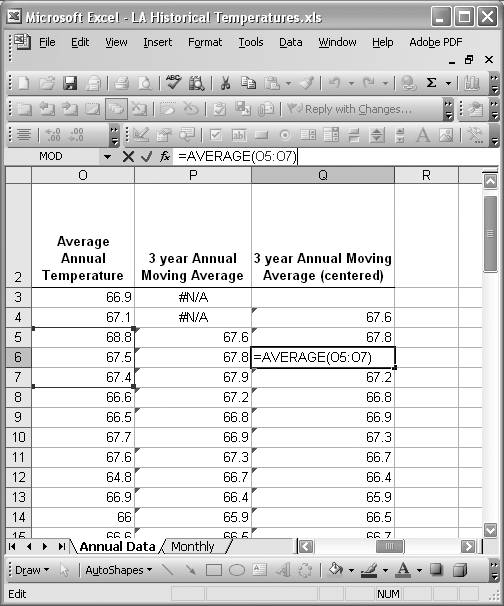 Figure 6-10 shows the same original data and three-year moving average data computed using the Analysis Toolpak from the previous section. Further, Figure 6-10 shows a new column of three-year moving averages computed using the AVERAGE formula manually. To generate the new column, I entered the AVERAGE formula in Q4 with the cell range O3:O5 passed as the argument. The formula is =AVERAGE(O3:O5). This formula computes the average of the three original series data points centered over the second data point. Once I had that formula entered, I simply copied and pasted the same formula in all the remaining cells in column Q, corresponding to the original data. Using relative cell references meant that Excel automatically adjusted the cell range argument passed into the AVERAGE formula. For example, Figure 6-10 shows the resulting formula contained in cell Q6, along with the corresponding cell range argument.

The result of these simple steps yields a new data series containing three-year centered moving averages. This approach is direct in that you don't need to use charts first if you don't want to, nor do you need to use the Analysis ToolPak. Further, this approach is flexible. For example, you can change the cell range passed into the AVERAGE formula to compute averages over any period of your choosing.

You can also compute weighted moving averages in Excel. See Recipe 6.4 to learn how.