Changing the Type of an Existing Chart

You've created a chart but later decide a different chart type would be more effective. You'd like to change the chart type without having to re-create the chart from scratch.

Select your chart and right-click on it with the mouse. On the pop-up menu that appears, select Chart Type to open the Chart Type dialog box, which is the same as that used during step 1 of the Chart Wizard (see Figure 4-2). Select the new chart type and sub-type and press the OK button when you're done.

Figure 4-18 shows what the data from Figure 4-1 looks like as a Radar chart.

I should mention that Radar charts require the x-axis data to be evenly spaced. The heading data for this example is the x-axis data, but for this Radar chart the heading data is merely used for labeling the chart; it does not govern the structure of the polar axis. The spacing of radial gridlines on Radar charts is always uniform. The number of radial gridlines will equal the number of data points in the series being plotted.

The cell range in the Values field is the range of cells containing the y-data to be plotted, the force data in this example. The heading data happens to be uniform and ranges from 0 to 360 degrees. These facts make the chart appear as you would expect. To force the chart to display the heading angles on the radial axis, you have to supply the cell range containing the heading data in the "Category (X) axis labels" field. Since we converted this chart from an XY chart, Excel filled in the label field automatically. 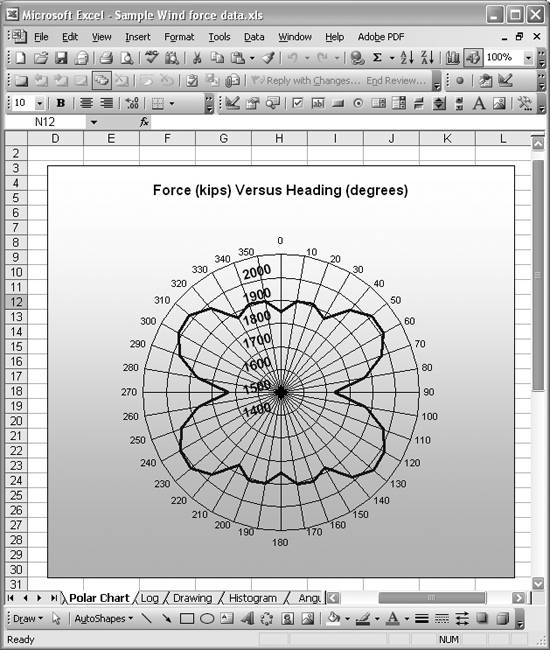 You'll notice that this chart looks a little fancier than some of the other examples discussed earlier. All I did was format the chart a little differently by including a background image as the fill pattern for the chart itself, and by tweaking the title and grid line colors using their format options. See Recipe 4.3 for more information. 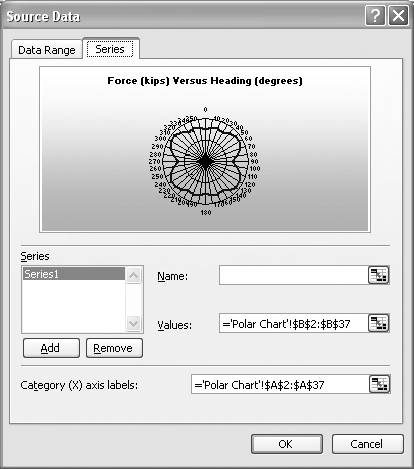