You need to assess how well an equation fits the underlying data.

If you're simply fitting a curve through some data so you can conveniently interpolate the data, then choose whichever model best replicates your data. In this case you're not so concerned with smoothing the data or with statistical rigor. You can plot your data along with estimates using the fit curve and eyeball them to see how well they compare. You can also plot the residualsdifferences between your actual y-value and the estimated y-valueand examine them to assess how well your data is represented or to determine if the residuals exhibit some unexpected structure. You can compute percentage differences to gauge how well your data is replicated. Further, you should examine how the trendline behaves between data points used to generate the trendline to make sure there are no unrealistic oscillations between data points. This can happen when you try to fit a higher-order polynomial trendline.

If you're interested in modeling the data from a statistical standpoint, or are trying to gain insight into a physical process, then you can perform some standard statistical calculations to help assess your trendline. Moreover, you should consider what your data represents. If your data represents some physical process, then let physics be your guide and choose a model that best represents the physical relationship between the variables underlying the data, if it is indeed known. In the discussion to follow, I show you how to perform several standard calculations for assessing goodness of fit in Excel.

For illustration purposes, I prepared a dataset that exhibits a linear relationship and had Excel compute various trendlines, including one linear and three nonlinear trendlines. The results are shown in Figure 8-13. 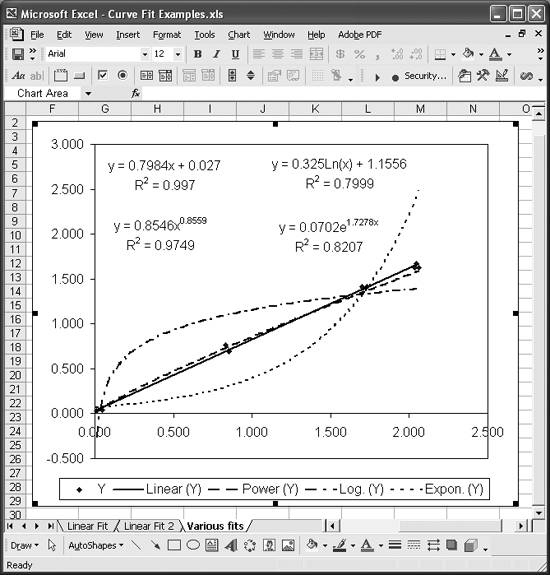 trendlinesexhibit poor fits, with R-squared values of 0.7999 and 0.8207, respectively. You can also visually see that the log and exponential fits poorly represent the data under consideration.

Examining these results brings up a point of concern. Say you initially fit a power curve to the data shown here. You might reasonably assume the power curve is the best-fit curve, given the resulting R-squared value of 0.9749. However, we happen to know a little something about the physical phenomenon this data represents and know that this is a linear problem. A linear fit indeed shows a better fit, with an R-squared value of 0.997. These results reinforce the importance of the need to use your judgment and understanding of the problem being analyzed when choosing an appropriate model. 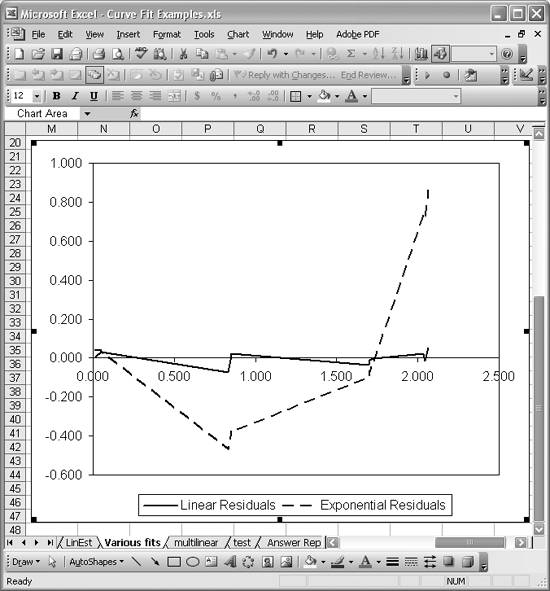 Another check on how well a model represents a set of data is known as the F-test . This test comes from a technique known as analysis of variance (ANOVA) developed by R. A. Fisher. The formal details of this test can be found in standard statistical texts that cover ANOVA.

Excel makes it easy to perform this F-test because its regression functions, such as LINEST, return the statistics required for this test, and Excel also contains other required probability-related functions. The F-test basically involves computing a statistic known as the F-statistic and comparing that value to a critical value obtained from the standard F-distribution using Excel's built-in functions. If the computed F-statistic is greater than the critical statistic, then you can conclude the fit is a good one or, more formally, statistically significant.

Figure 8-15 shows an example linear curve fit using Excel's LINEST function (see Recipe 8.3). The results of using LINEST on the given dataset are contained in the cell range E8:F12. I've included a key explaining what each returned value represents. The value in cell E11 is the F-statistic computed by LINEST.

Assessing goodness of fit is certainly not limited to the techniques I've discussed here. I'm sure a professional statistician could easily explain a half-dozen more statistical tests that could be used to validate a particular curve fit. 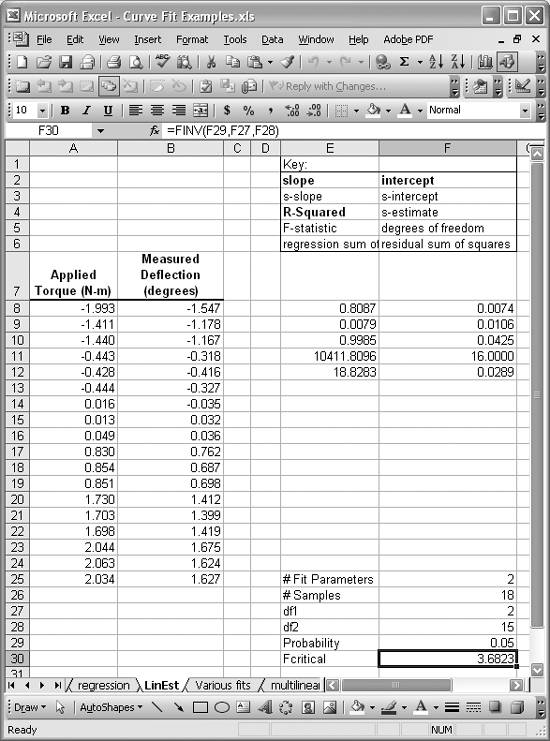