You need to compute summary statistics (measures of central tendency and dispersion) but are not sure what support Excel offers for these calculations.

Excel offers many built-in spreadsheet functions allowing you to quickly compute summary statistics. Further, the Analysis ToolPak offers a Descriptive Statistics tool . You can perform the same statistical calculations offered in the Descriptive Statistics tool using spreadsheet functions. There are, however, caveats that you need to know about. Read the following discussion for more information.

I'll show you how to perform basic statistical calculations in Excel on an example set of data. The dataset I'll use was downloaded from the National Institute of Standards and Technology statistical reference dataset page at http://www.itl.nist.gov/div898/strd/general/dataarchive.html. The dataset consists of speed of light measurements from a study conducted by Michelson in 1879. The data consists of 100 values representing the speed of light in units of millions of meters per second. Figure 5-1 illustrates a portion of this data along with several computed statistics for the dataset.

The dataset is in column B, labeled Speed of Light (millions of m/s). There are 100 values in this column, but only the first dozen and a half or so are shown in the figure.

First, to use the Descriptive Statistics tool, you have to open the Analysis ToolPak by selecting Tools

In the Input Range field, type (or select directly from your spreadsheet) the cell range containing the data you want to analyze. Since the example data is in a column, I selected the Grouped By: Columns option. 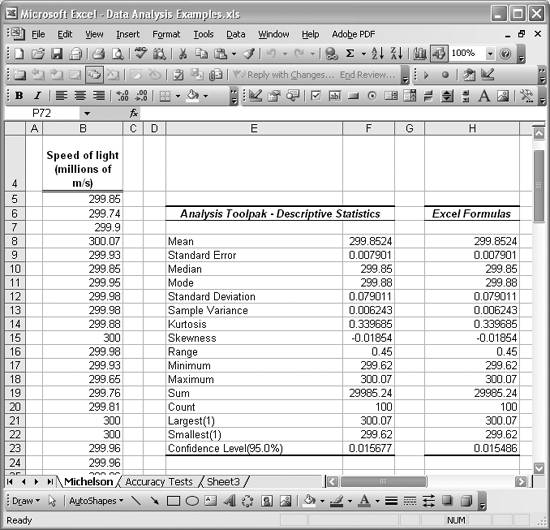 I checked all of the options shown in the lower part of the dialog box in Figure 5-3 in order to generate all the available statistics. Pressing OK generates the results shown earlier in Figure 5-1. 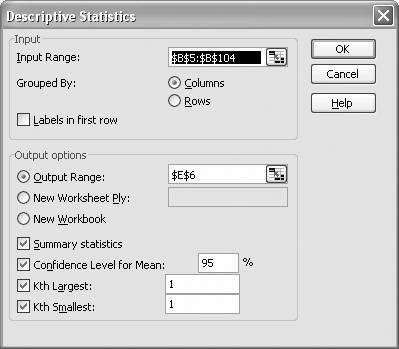 You can compute the same statistics using only Excel's built-in functions. Cells H8 through H23 in Figure 5-1 contain the same set of statistics, computed using Excel's functions. Table 5-1 shows the cell formula I used to compute each statistic.

Table 5-1 illustrates that Excel has built-in formulas for all of these basic statistics with two exceptions. There's no formula for computing the Standard Error (standard error of the mean in this case). Nor is there a formula for computing the Range. However these two statistics are easily computed using the results of other formulas. For example, to compute the range you simply take the difference between the Maximum and the Minimum. To compute the Standard Error of the mean, you simply divide the Standard Deviation by the square root of Count.

If you take a close look at Figure 5-1, you'll see that the statistics computed using Excel's formulas exactly match those computed with the Analysis ToolPak with one exception: the values for the 95% confidence interval are different. This difference is due to the fact that the CONFIDENCE function uses the inverse of a standard normal distribution to compute the confidence interval, whereas the Analysis ToolPak uses the inverse of Student's t-distribution. Excel does provide other functions that allow you to compute confidence intervals using Student's t-distribution. See Recipes 5.3 and 8.8 for more information.

I should also mention that some of Excel's statistics functions (including those in the Analysis ToolPak) have historically dealt poorly with some troublesome datasets. For example, if your dataset contained very large numbers with very small differences between them, the Descriptive Statistics tool would compute the standard deviation and variance incorrectly, and this would then affect results of other statistics that used those values. The workaround in this case is to center your data by subtracting the mean from each value (or by shifting the data by a sufficiently large value), and then compute the standard deviation and variance based on the centered data.

If you shift the original dataset by subtracting, say, 1e10 from each value, you end up with a dataset that looks like this: 1, 2, 3, 4, 5. The standard deviation and variance should be the same as in the previous two cases. Again, older versions of Excel deal with this shifted dataset just fine and compute the correct statistics.

Excel's help guide includes a complete list of all its built-in statistical functions. You can find this list by searching Excel's help for the topic "Statistical Functions."

Moreover, Excel has built-in functions to support regression and curve fitting. These, along with other regression techniques, are discussed in Chapter 8.