Looking Up Values in Tables

You're using tabular data in calculations and you need an easy way to look up values in the table for use in other calculations.

Use the built-in functions Lookup, VLookup, HLookup, Match, or Index.

Excel provides five functions to help you access data in tabular form. These functions come in handy when performing calculations that require looking up data from standard tables. For example, you can develop a spreadsheet to perform thermodynamic calculations and include standard steam tables in this spreadsheet. This way, instead of manually looking up fluid properties to use in your calculations, you can automatically include that data via the lookup functions discussed here.

Figure 3-24 illustrates a typical application of LOOKUP. In this example, we have a simple table of data that presents design factors, say for ship structural design, as a function of length of the ship under consideration, the ship's hull material, and the units used. (Don't bother looking up this table of data in a marine design handbookit doesn't exist. I just made it up for illustration purposes.)

Let's say we have a design formula, or better yet a whole series of calculations that must be performed, that requires the design factor as input. Including the design factor table in the spreadsheet allows you to conveniently select the factor by specifying the length, material type, and units, rather than looking up the data in a handbook and entering it manually. This is especially handy if you distribute your spreadsheet to someone else.

This formula looks more complicated than it is, due to the nested IF functions. 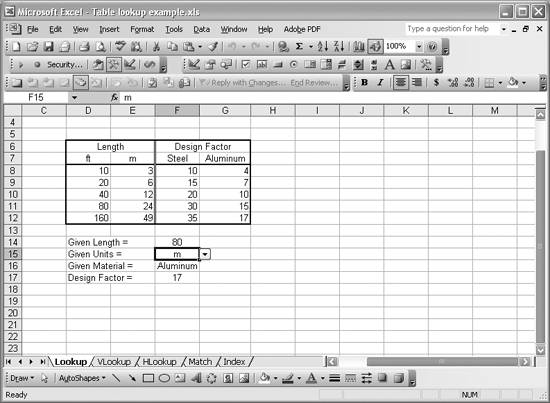 Physical properties of water for a given temperature can be retrieved from this table using VLOOKUP. In Figure 3-25, cell E17 contains the given temperature for which properties are retrieved. In this case, density, internal energy, enthalpy, entropy, specific heats, sound speed, and viscosity corresponding to the given temperature are shown in cells E18 through E25. Each of these cells contains a formula that utilizes VLOOKUP. For example, cell E18 contains the formula =VLOOKUP($E$17,$C$4:$K$12,2). The value to be looked up in the first column of the data table is stored in cell E17; this is the given temperature. The data table itself is stored in the cell range C4:K12. The last parameter in this formula indicates the column in the data table from which to retrieve data corresponding to the given temperature. Column 2 in this case is the density of water. The remaining cells contain similar formulas. The only differences are the last parameter in VLOOKUP (i.e., the column index from which to retrieve the desired value). 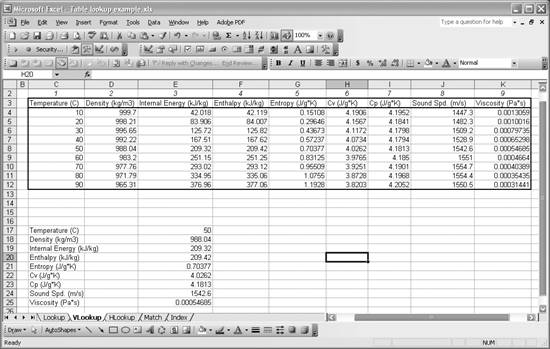 HLOOKUP is very similar to VLOOKUP; however, HLOOKUP uses the first row of data in a given cell range as the lookup array. The syntax for HLOOKUP is = HLOOKUP(lookup value, table, row, match flag). The only difference between this syntax and that of VLOOKUP is the third parameter; HLOOKUP requires a row number to be used to retrieve the result.

Figure 3-26 contains the same data shown in Figure 3-25; however, in this new example the data has been transposed. Now, temperatures are on the first row instead of in the first column.

Physical properties of water for a given temperature can be retrived from this table using HLOOKUP. For example, cell D17 extracts the density corresponding to the temperature given in cell D16. The formula in cell D17 is =HLOOKUP($D$16,$D$4:$L$12,2). The formulas for the other properties in cells D18 through D24 are very similar; only the result row number changes. 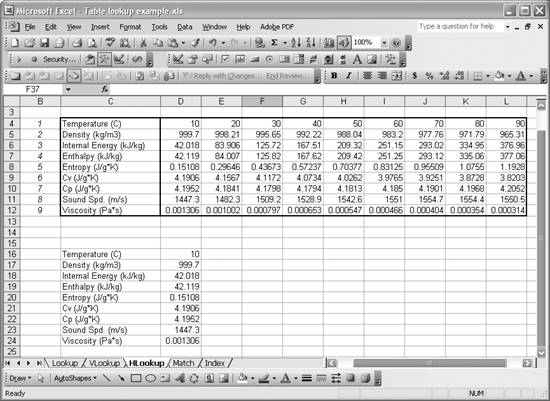 The spreadsheet in Figure 3-27 shows how you might use MATCH. In this case, we have the same data table as in the HLOOKUP example. This time, however, in cell D18 we have this formula: =HLOOKUP(D17,D4:L12,MATCH(C18,C5:C12,0)+1). This time I nested a call to MATCH as the third parameter in HLOOKUP. In the previous example, I specified a row in which to look up the result. In this case, I use MATCH to find the row corresponding to the description of the property selected in cell C18. Cell C18 contains a drop-down listbox that allows you to select any of the properties in the table except the temperature property. I used the same data validation technique described earlier in this recipe to create the selection list in this example. 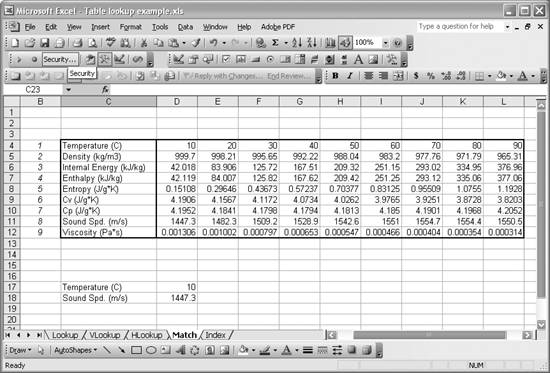 The call to MATCH in the call to HLOOKUP returns the position of the selected description in the list of descriptions contained in cells C5 to C12. To get the proper row number for the table in the cell range C4:L12, you have to add 1 to the value returned by MATCH since the number of rows in the description cell list is shifted by 1 from the data table.

Figure 3-28 shows a spreadsheet containing a set of data resembling a 4x3 matrix. 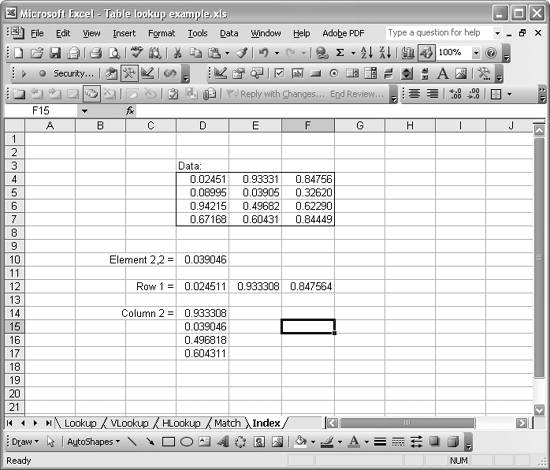 To extract the first row as shown in Figure 3-28, I first selected the destination cell range D12:F12 by clicking and dragging the mouse. Then I pressed the equals sign to begin writing the formula: =INDEX(D4:F7,1,0). Notice that I set the column to 0, indicating that I want an entire row. To enter this formula, which is now an array formula, press Ctrl-Shift-Enter instead of the usual Enter. This tells Excel you're entering an array formula, and it will fill all the selected cells with results of the formula you entered.

To extract the entire second column as shown in Figure 3-28, select the range D14:D17 and Ctrl-Shift-Enter the formula =INDEX(D4:F7,0,2). In this case, the row is set to 0, indicating that you want to extract an entire column.

In this recipe, I used and briefly discussed Excel's IF function. While its use is fairly straightforward, you can read more about it and other logical functions in Excel's online help. Look for the topic "Logical Functions."