Use the CLEAN worksheet function.

If you've tried some of the text-importing recipes in this chapter, you may have come across some unusual characters in your imported data, as illustrated in Figure 3-14.

Notice the unusual rectangle characters mixed with the data. These characters are so-called nonprintable characters because under normal circumstances you can't see them. They include control characters such as line-feed and carriage-return characters, tabs, and others. You may or may not encounter such characters, depending on where your text files originate. I find I'm more likely to encounter such characters when importing data from text files that originated on a non-Windows system. This is because there are different standards for specifying formatting and control instructions on different systems. For example, Windows uses both a line feed and carriage return to denote the end of a line of text, whereas Macintosh systems use a single carriage return. 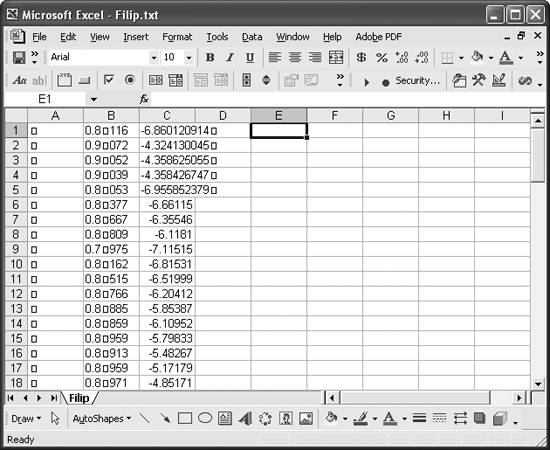 Columns G and H show the cleaned data. Notice the cell formula for the selected cell, G1, displayed in the formula bar. In this case, the formula is =CLEAN(B1). The result is that the nonprintable character was removed from the number 0.8116.