Depending on whom you ask, early on, IS-IS was deployed because OSPF had not matured enough for interconnecting BGP systems. Whether that is true or not is debatable. Today, OSPF is used without any such worries. However, IS-IS continues to be popular among service providers (ISPs) as a way of interconnecting BGP networks.

Another reason for its early popularity might be that it routes both IP and Connectionless Network Service (CLNS). OSPF can route only IP. In fact, even if you are not using CLNS, you must use Network Service Address Point (NSAP) addresses on the router to enable IS-IS. CLNS has the added advantage of keeping IP layer problems, such as duplicate IP addresses, from disrupting the router protocol functions.

IS-IS is a link state protocol that provides an array of features:

Another advantage is that IS-IS generally allows for larger areas than OSPF. While that might be true, OSPF has a lot of nice features in other areas that IS-IS doesn't.

People often think IS-IS is hard to configure. (It might be those pesky NSAP addresses scaring them off.) But as you'll see, just like any routing protocolwith the exception of BGPyou'll find IS-IS easy to use. Before we start configuring it, we need to review a few IS-IS concepts.

In order to perform a basic IS-IS configuration, we need to understand levels, NSAP addressing, and enabling an interface for IS-IS.

Routers can be defined as level 1, level 2, or both. In our illustrations, we abbreviate these designations as L1, L2, and L1/L2.

For TCP/IP networks, IP addresses must be unique. IS-IS is part of the OSI standard, and a Network Service Address Point (NSAP) address is the equivalent of an IP address for an OSI network; it must be unique throughout the IS-IS network in question. An NSAP address is a hexadecimal address with a length of up to 40 hexadecimal digits. It defines the address of the device (the system ID) and the link to the upper layer (the area number). NSAP addresses are used in ATM, as discussed in Chapter 6.

Since our IS-IS network is small and not connected to others, we use a simplified addressing scheme designed to correspond to the way Cisco uses the address bytes. For our addresses, we'll convert and use our loopback IP address for our router. So, if our IP address was 192.168.21.1 (think of it as 192.168.021.001), our NSAP addresses look like this:

Where N is the area number (1, 2, or 3), and the rest of the NSAP is our IP address (1921.6802.1001). This works for us because device numbers are unique across areas. Another way of creating unique NSAP address is to use the Media Access Control (MAC) address.

Using the loopback naming convention is strictly our own way to help us in selecting the net addresses that we add to the configuration file. Since these addresses look like IP addresses, they serve as bridges between IS-IS and our IP addressing.

We configure the IS-IS network using the net command: 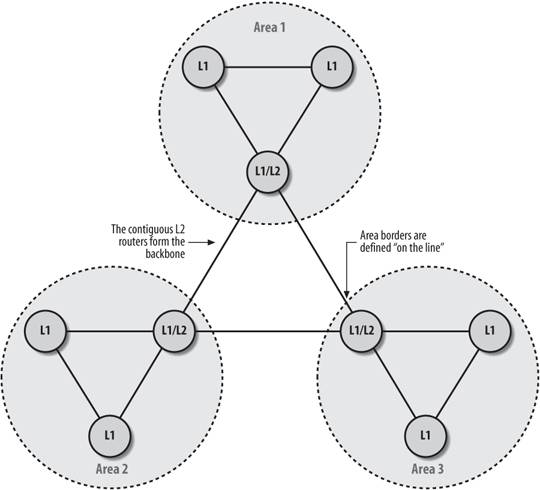 Our sample configuration builds on an earlier example. In Figure 9-11, we can see the network with the area boundaries. This is the same network we used in our EIGRP example in Figure 9-3. However, this time we want to drop EIGRP from our network and run IS-IS only. 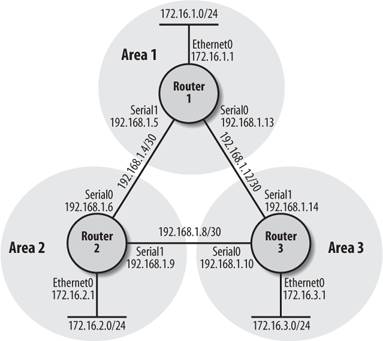 Here's the configuration for Router 1:

And here's the configuration for Router 3:

If we do some show commands on Router 1, we can see the network is functioning, as we would expect:

The first command we'll use is show isis topology, which displays the IS-IS network topology as our current router sees it.

The second command we'll look at is show isis database, which shows all the IS-IS information we currently have. If you are troubleshooting your IS-IS network, you might want to look at show isis database detail, whichas the name suggestsprovides a greater degree of detail.

In this output, there are a few terms we should explain. First, the LSPID is the LSP Identifier, which the first six octets form the System ID of the router that originated the LSP. The Seq Num allows other systems to tell if they have the latest information from the source. The checksum is, of course, the checksum of the LSP packet. The holdtime is the amount of seconds that the LSP will remain valid. A value of zero means that the LSP has expired and is currently being purged from the router's databases. ATT is the attach bit, which indicates that the router is a level-2 router. Level-1 routers use this bit to find the nearest level-2 router. P stands for "repair partitions," which is a feature not supported by Cisco although it's reported here. Finally, the OL bit stands for "overload," which signals that the IS is congested. If the OL bit is set, other IS-IS routers will not use that router as a transit router. And only packets for devices directly connected to the overloaded router are sent to it.

We can enable IS-IS authentication by providing, directly on the interface, an IS-IS password for each level directly. The command isis password specifies the passwords for each level, as in this example:

Now, our router cannot communicate via IS-IS until all its adjacent neighbors are configured with the same IS-IS passwords. You can also assign passwords to the area and the domain with the area-password and domain-password commands.

Other routing protocols assign a metric to an interface by using a calculation based on bandwidth or some other cost. IS-IS normally just gives every interface a metric of 10. In order to change this metric, you can provide an IS-IS metric directly on the interface with the rather obviously named isis metric command.

You can assign a metric value between the values 0 to 63. These values can be assigned to level 1, level 2, or both. For example, let's configured a metric of 23 for level 1 on Serial 0, and a metric of 25 for both on Serial 1.

The default-information originate command designates a given router as the default route for the network and announces that information to other routers in the network. For example, if we perform the command on Router 1:

Route leaking sounds bad doesn't it? We'd better talk about how to plug those route leaks. Actually, it's more about route distribution than leaking. We've talked about how level-1 routers use level-2 routers to route packets that are outside their own area. A level-1 router knows about its own area and level-2 routers know how to connect their own area and the all the other areas.

Route leaking (or distributing) provides a way of letting level-1 areas know about level-2 routing information. The route information is "leaked" from level 2 to level 1. By having this information, the level-1 router can make better decisions as to which level-2 router to use to access outside areas.

100 is the access list that defines the routes we want to leak. The meTRic-style wide command is optional, but Cisco highly recommends it.

Leaked routes appear in the route table with the ia notation (ia stands for "interarea"):

Now that this router has a "leaked" route, it can make better decisions about which level-2 router to access in order to reach the 172.16.100.0/8 subnet.