Commands for IOS-enabled switches (e.g., 2900XL, 2950, 1900, and 3550) are almost identical to those on the IOS routers, which makes them fit nicely into the scope of this book. To connect a switch to the network, we must first configure the management port, as described next.

In order to access a switch remotely with telnet (SSH is not yet available on switches), ping, or SNMP, we need to supply a few basic pieces of information, including the IP address, subnet mask, and a default gateway.

Figure 14-3 illustrates a very simple network, consisting only of a router and a switch. In our example network, you can imagine that we just replaced a hub with our new switch. Now that we have swapped our hub for a new switch, we need to configure it.

Here's the configuration file for Switch 1 from Figure 14-3:

Now that we have our management VLAN configured, we can ping back and forth from the router to the switch.

The output of the show VLAN brief command shows all the interfaces currently in VLAN 1, which is what we'd expect since we haven't yet configured them into different VLANs:

The show mac-address-table command displays all the MAC addresses the switch has learned so far, which, in this case, is the MAC address of the router:

On our interfaces, we have the ability to leave the speed and duplex settings in auto negotiate, which means that the device will try to detect and set them automatically. Unfortunately, these auto-sensing features are notoriously bad at choosing the correct setting. Furthermore, an incorrect duplex setting can result in serious network latency and intermittent connectivity.

At half duplex , it is possible for both devices to sense that the wire is available and to transmit at the exact same time, which results in a collision. Collisions are considered normal. However, more than a one percent ratio of errors to total traffic signals indicates that something else might be wrong.

At full duplex , the collisions counter is not active. A duplex mismatch causes impaired collision handling. It's always a good idea to set these values explicitly in interface configuration with the speed and duplex commands.

To verify the settings, use the show interface command, just as you would on a router:

In our previous example, we configured only the management VLAN for the switch (VLAN 1). To make our network more realistic, let's split our network up into four VLANs: VLAN 1, VLAN 2 (Human Resources), VLAN 3 (Development), and VLAN 4 (Sales).

Figure 14-4 shows how these VLANs will be configured in our network.

Figure 14-4. Splitting up the network with VLANs 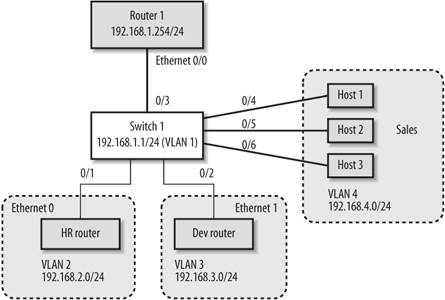 As you can see, VLAN 2 (Human Resources) and VLAN 3 (Development) each have routers for their subnets while VLAN 4 (Sales) is simply composed of three hosts that are directly connected to the switch.

To make an interface a member of a VLAN, use the switchport access command on each interface. In very simple terms, this command assigns an interface to each VLAN. The following configuration shows the switch commands for the network illustrated in Figure 14-4:

Now, when we run show VLAN brief, we see that the interfaces are in the VLANs that we expect them to be in:

That's great! We've configured our VLANs just the way we want them. However, there's a big problem with this network. As you might recall from our previous discussion, each VLAN is a separate subnet, which means that VLANs 2, 3, and 4 are all logically separated. Router 1 can access only VLAN1 in this configuration, which means that the other VLANs can't access each other or Router 1. So what do we do? We need to make Router 1 a member of all VLANs. To do that, we need to employ trunking .