In release 12.3, Cisco changed the image package naming model. As you can see from the previous explanations, image selection had become overly complex and difficult to understand. In the new packaging model , the image selection has been reduced from 44 to 8 possible packages.

Some of the advantages of the new package model are: 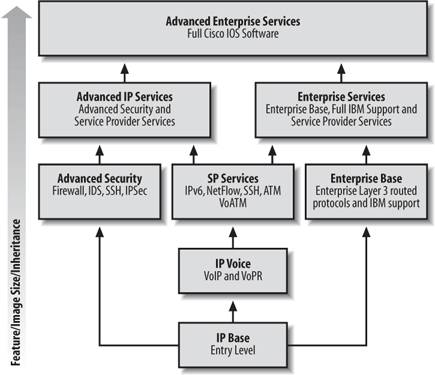 Here's an example of the new image naming scheme:

General Deployment indicates that the code is extremely stable for the most demanding production environments. Although this image is very stable, the number of new features is extremely limited.

Limited Deployment means that some newer maturing features have been added, but the release is not as stable as a GD release.

Early Deployment is the cutting-edge version, with the latest and greatest features, which means testing has not been completed. In other words, bugs probably still exist in this release, which makes it unsuitable for most production environments.

The release in our example is LD, so is for limited deployment. Since the status of the release is not included in the filename, how do you find out? You must look it up at Cisco's web site. For an easier way of doing this, see the next section, which explains the Cisco Feature Navigator .

This method of classifying releases replaces Cisco's old convention, in which releases were labeled with certain characters in their filenames. For example, "x" meant that an image had added features to support new hardware but wasn't very well tested. This labeling has been replaced with the GD, LD, and ED classifications.

Recently, Cisco changed the way you find the IOS image you are looking for with the release of the Cisco Feature Navigator. You can find this web page at http://tools.cisco.com/ITDIT/CFN/jsp/index.jsp or by searching on Cisco's site for "Cisco Feature Navigator." However, to access this feature you need a CCO account . To create an account, click on the "Register Now" link at the top heading on the main web site at http://www.cisco.com.

While a basic CCO account will give you access to the Cisco Feature Navigator, you'll need a service contract tied to your CCO account in order to download the new images. The CCO registration page requests the required information when you sign up.

The Cisco Feature Navigator lets you quickly select the IOS release you want, based on the device model number and the desired feature set. You can search by feature, release, or platform. You can even compare different releases of IOS, a very handy tool that takes the burden out of selecting images.