The following basic commands apply to just about any type of interface.

The shutdown command disables an interface. The interface does not transmit packets after it has been shut down; all routing protocols are informed that the interface is unavailable.

Use the no shutdown command to restart an interface that has been shut down:

The shutdown command can also be applied to a subinterface. In this case, it stops protocol processing on that subinterface without affecting the other subinterfaces or dropping the entire interface.

Use the no form of this command to remove the description:

Setting the IP address on an interface is fairly simple: use the ip address command, followed by the address and the subnet mask. For example:

For example, suppose we had an Ethernet segment with a 255.255.255.224 subnet, which allows 30 hosts per subnet, as in Figure 5-1 (before). Everything is working fine. Then one day your boss comes in and tells you to add 30 more hosts on the segment. The bad news is that there are no more Ethernet ports on your router and you need to add the new machine's addresses today. 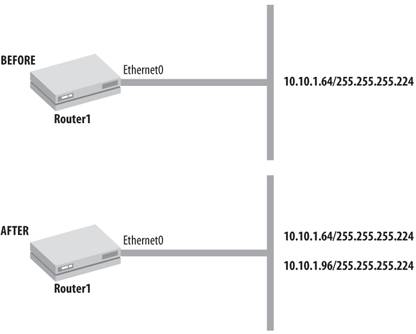 After a few minutes of panic, you weigh your options. One is to resubnet the network. You would then need to change the subnet masks on every machine, which is time-consuming. Even if you are using DHCP, a massive network reorganization is bound to be disruptive for your users.

The second, easier option is to add another subnet to the Ethernet segment by using the secondary command. In the old configuration, the original subnet was 10.10.1.64 with 30 hosts. In the new configuration, we add a second subnet, 10.10.1.96, to the segment:

Some pitfalls with secondary addresses are:

You will encounter the following commands frequently as you work with interfaces on Cisco routers:

The bandwidth command does not have anything to do with configuring the speed of an interface. Rather, it defines the interface speed for calculating routing metrics and other purposes. You would use this command to tell the router the interface's actual speed if for some reason the default bandwidth was not correct (for example, for a fractional T1 line, the router will use the speed of a full T1 as the default bandwidth), or to "lie" about an interface's bandwidth to influence route metric calculations and steer traffic in a particular direction. Obviously, giving the router incorrect information about an interface's bandwidth is an iffy proposition, but there are times when that's the easiest way to achieve the result you want.

Enabling proxy ARP on an interface allows the router to respond to ARP requests for hosts that it knows about, but that aren't directly reachable by the host making the ARP request. If the router receives an ARP request for a host and the router has a route to that host, the router sends an ARP response with its own data link address to the requestor. The requesting host then sends packets to the router, who in turn forwards them on to the correct destination host.

This command enables the generation of ICMP protocol unreachable messages (the default). These messages are generated when the router receives a nonbroadcast message for a protocol it doesn't recognize. This command is usually used in its negative form (no ip unreachables) and is often used on the null interface.

Now let's look at some of the specific interface types you're likely to encounter.