ping tests network connectivity by sending an ICMP echo-request message to the remote machine. The remote machine must respond with an ICMP reply message. The ping command takes a single argument: the address or hostname of the remote system. It prints various statistics about the responses it receives:

Each exclamation point indicates that the router has successfully received a response from the remote host. On a local network, you would expect a success rate very close to 100%. Across the Internet, you would tolerate some failures, but they should still be relatively rare. Many sites configure their routers to block ICMP traffic because it has been used in a number of denial-of-service attacks. Therefore, you can't count on the ability to ping an arbitrary host on the Internet.

If you don't give the hostname on the command line, the router prompts you for it, and for other information. You can specify the number of packets to send, the number of seconds to wait for a response before assuming that the ping has failed, the amount of data to include in the packet, and more:

Here we changed the repeat count to 10, which sent 10 ping packets to our destination.

If you want to discover what hosts are active on your subnet, you can ping the network's broadcast address. All nodes on the subnet should respond. Since this tool can be used for malicious purposes, it is available only from the privileged level. For example, if our ethernet0 interface were on the 192.168.1.0/24 subnet, we could ping the broadcast address of that network:

The output will show the responses from all the hosts on the subnet. Another way to find out which hosts the router knows about is to display its ARP table:

This command lists all the machines from which the router has seen packets.

Extended ping provides more options than the basic ping command. These options can be used to better diagnose a network connectivity problem. To enter the extended ping mode, type the ping command, then type y at the "Extended commands" prompt: 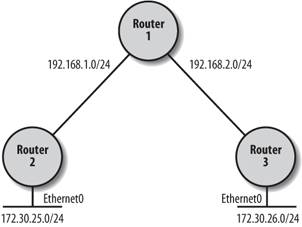 While this test is useful, it isn't perfect. Even if the packet returns, we really don't know how it made it back. In a more complex network, there may be many ways for a packet to make it from Router 3 back to Router 2. Using the source address doesn't actually prove that a certain network is up or down, but it's helpful as a quick test.