Multiprotocol Label Switching (MPLS) integrates layer 2 information with layer 3 routing, which means that MPLS offers the performance of switching with all the intelligence of routing.

Before we start talking about the advantages of MPLS and how it operates, we need to define a few terms:

A group of routers in an MPLS "cloud," that is, where all are running MPLS.

Label Switching Router. A router within our MPLS domain that is running MPLS.

Label Switched Path. The path the packet will take along our MPLS routers.

The first router in the MPLS domain. It attaches the MPLS tag to our packet.

The last router in the MPLS domain for a packet's path. The egress router strips the MPLS tag from the packet before forwarding it to its final destination.

An MPLS domain is a group of LSR routers, as shown in Figure 13-6. By using MPLS, the routers are able to route and switch packets based on the label (tag) that the packet has been given. (This label is appended to the packet by the ingress router and removed by the egress router.) This label identifies the flow between the two endpoints in the MPLS domain. In this case, the path is from Customer A Site 1 to Customer A Site 2.

So, you might be asking, what's the big deal? It attaches labels to packets; so what? Well, here is the big deal: as a packet travels along the path, the routers do not need to examine or process the IP header of the packet nor do the routers need to make routing decisions for each packet. The routers simply look at the packet's label to make the "routing decision." Before we were using MPLS, each router had to examine the packet's IP information and then look up the routing tables, which is a waste of resources. Why have each router repeat the same steps?

One common analogy used to explain MPLS compares it to the post office. (I almost hate to use it here because I see it so often, but I can't think of a better analogy.) When the post office receives a piece of mail, it's processed just once at the first sorting facility that it reaches. At this facility, the letter is scanned and labeled with a tag. This tag identifies the path this letter will take to its destination. As the letter travels to a new facility, the letter doesn't need to be reread and routed; only the tag needs to be processed. The tag points to a path from the one facility to the next. If each sorting facility reread the letter's address, mail delivery would be highly inefficient. The same thing goes for MPLS: having each router along the MPLS domain reread the packet's IP address information and make a routing decision is a waste. MPLS saves routing resources by making the decision once and letting routers farther down the path make routing decisions based solely on a simple label.

To better understand, we could look at the MPLS process. The first LSR router in our MPLS domain is the one that examines the packet's IP information and attaches the MPLS tag to the packet. As each LSR router along the path receives the labeled packet, the following steps occur: 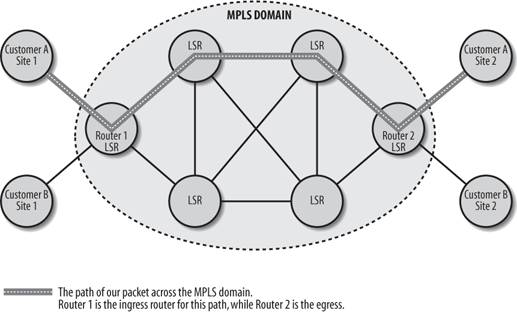 There isn't much to a simple MPLS configuration; we just need to enable CEF (Cisco Express Forwarding) on the router with the global command ip cef and enable MPLS with the older interface command tag-switching ip.

As of IOS version 12.0, the mpls command replaces the tag-switching command. So our configuration becomes:

If you want to deploy MPLS slowly, you can do so two routers at a time. For example, we can start our migration to MPLS by adding the following configurations on just two of our interconnected routers. After we have the two routers running MPLS, we can move out and configure the next connected router on our path. We'll start at the core with two adjacent routers. Each time we move out and implement MPLS on more routers, we are defining new ingress and egress routers and expanding our core.

Here's the configuration for Router 1:

Now just keep going to the next router until the entire MPLS domain is complete.

As if MPLS were not already a big-enough feature, there is one more major part to describe: MPLS VPNs. These VPNs allow you to create totally separate VPNs across an MPLS domain. These VPNs are seen as private intranets within each domain, so there is no concern about one customer's traffic mixing with another's.

MPLS VPNs are connectionless, scaleable, easy to create, and support technologies such as multicast, QoS, and VoIP. Since they are connectionless, the biggest advantages are that they are easier to build and manage versus conventional VPNs, take up less CPU and memory on the routers, and offer faster switching. For an MPLS VPN to operate, we need to understand some VPN router types , as shown in Table 13-1.

Our network diagram in Figure 13-6 shows PE routers Router 1 and Router 2. All the other LSR routers in our Domain are Ps. The CE and C routers would be at the customer site. For our example configuration, we configure only the PE routers for the VPNs.

Each MPLS VPN is associated with a VPN routing/forwarding (VRF) instance. A VRF defines the VPN membership of a remote site to the PE router. For each VRF, a separate routing table and CEF table is managed, which keeps the outside traffic from entering our VPN and information leaving our VPN.

On our PE routers (Router 1 and Router 2), we need to define our VPNs. To do this, we create two VRFs with the ip vrf command and apply these VRFs to our interfaces with the ip vrf forwarding command. The route distinguisher is our AS number followed by another number, which in this case is 1 for Customer A and 2 for Customer B.

For our BGP configuration, we simply use the address-family ipv4 vrf command, which allows us to define what is to be redistributed. In this case, we are just redistributing the connected information, but it could be static routes, RIP, OSPF, and so on.

For Router 2, the configuration would be identical except for the IP addresses:

To verify our MPLS VPN configuration, we can use the following commands:

Shows which VRFs have been defined and what interface they are on.

Shows the interface information for our VRFs.

Our VPNs should appear in the BGP routes.

Let's look at those commands with their output.