You need to make a forecast of future values given historical values for a time series.

Excel does not provide built-in functionality for sophisticated forecasting . It does have a FORECAST spreadsheet function that sounds enticing; however, that merely uses a linear trendline and is unsuitable for time series that exhibit significant seasonal variability.

If you have the resources, you could purchase one of the many Excel add-ins that offer sophisticated autoregressive moving average (ARMA) or neural network techniques. If you're so inclined, you can even program such techniques yourself in VBA.

In lieu of all these approaches, you can use standard spreadsheet techniques to make forecasts. I'll show you how by extending the techniques discussed in the previous several recipes.

The brunt of this forecasting effort has already been covered in the previous recipes, in which I showed you how to decompose the time series into its various components using the model Y = TSI. (If you have not read the previous three recipes, you should do so now for relevant background discussion and calculations.)

So all you really need to do now is compute the long-term trend values for the year 2000 using the trend equation from the previous recipe. Then multiply these trend values by the seasonal index for each corresponding month to arrive at a prediction for each month in the year 2000. Figure 6-28 shows a spreadsheet I set up to perform these calculations. 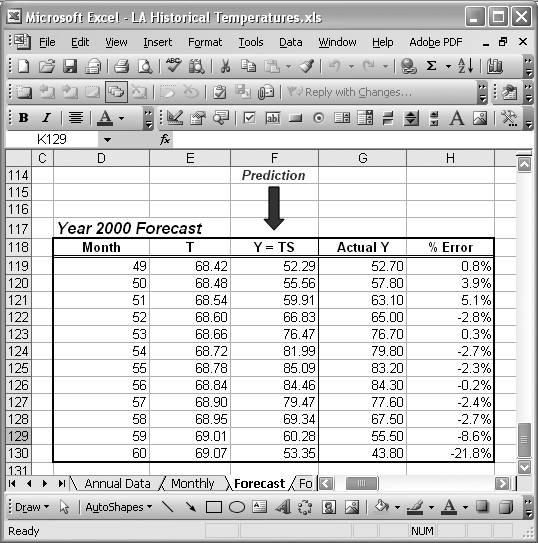 The column labeled Month contains the months representing the year 2000 as an extension of the original series, in which December 1999 was month number 48. You need to number the months for the year 2000 this way because the trendline equation computed in the previous recipe is based on the original monthly series from months 1 to 48 and now we're extending that trend out over another 12 months.

Figure 6-29 shows the predicted results compared to the actual average monthly temperatures on record for the year 2000. 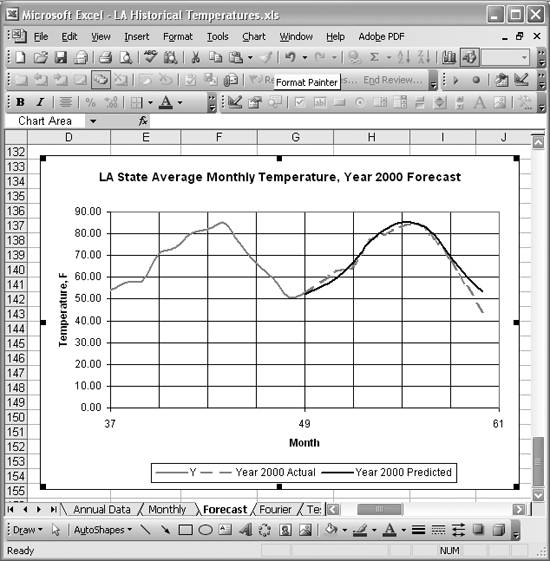 As you can see, these predictions are fairly good. They won't get me a starring role as the local weatherman, but they're not bad for such a simple forecast model. The table in Figure 6-28 also contains computed %Error values, and you can see that errors are on the order of a few percent except for the months of November and December.

The forecasting technique shown in this recipe is by no means the only technique available to you. Time series forecasting is a huge field of study and there are many techniques and models available, many of which are tailored to specific kinds of time series. The examples discussed here serve to show how you can leverage Excel's standard functionality to perform predictions.