You've formulated the finite difference equations for an elliptic boundary value problem and now you need to solve the resulting system of equations.

Use Excel's matrix functions to solve the system of finite difference equations.

If we discretize the problem domain as describe a moment ago, then at each node illustrated in Figure 12-1, we can approximate the second partial derivative of u with respect to x using the following finite difference approximation: 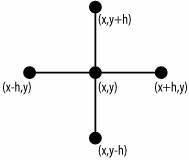 Similarly, the finite difference approximation for uyy is:

This equation must be satisfied at every node. Nodes adjacent to boundary nodes with Dirichlet boundary conditions will include the specified value at the boundary node. Typically, a ghost particle technique is used in the case of Neumann boundary conditions. In any case, writing this finite difference approximation at each node in the computation grid results in a system of equations that must be solved to find the u-values at each node. It's this resulting system of equations that can be solved in Excel.

For example, a rectangular domain divided into nine equal-sized cells would contain four interior nodes where values of u are sought. Applying the above finite difference equation at each node would result in a system of four equations and four unknowns. In this case, with such a small number of equations, you can use matrix formulas discussed in Recipe 9.4 to solve for the unknown u-values.

Finer computational grids, or meshes, result in a larger number of nodes and thus a larger system of equations. In these cases, it's usually more efficient and easier to use iterative methods to solve the system. Recipe 12.2 explains such an approach.

The body of literature covering finite difference methods is vast. Consult your favorite numerical methods book for more information. I found the Applied Partial Differential Equations book cited earlier in this recipe very readable and comprehensive in its coverage of the finite difference method to elliptic, parabolic, and hyperbolic problems.