You're engaged in hypothesis testing and you'd like to learn about Excel's support for conducting statistical tests .

The built-in function ZTEST computes the one-tailed z-test using the normal distribution. The syntax for this function is =ZTEST(cell ref, m, s) where cell ref is a cell reference containing an input dataset, m is the value being tested, and s is the population standard deviation. If s is not known, it can be omitted, in which case the sample's standard deviation will be computed and used in the z-test calculation.

FTEST computes the two-tailed F-test for two datasets. The syntax for FTEST is =FTEST(cell ref 1, cell ref 2), where cell ref 1 and cell ref 2 are cell references to the two datasets under consideration.

All three of these test functions have corresponding inverse functions (namely, NORMSINV, TINV, and FINV) that are useful when computing critical values for comparison. NORMSINV and TINV were discussed in Recipe 5.3. Recipe 8.7 makes use of FTEST and FINV while performing an F-test in the context of regression analysis.

Each state's sample contains 60 data points. An example hypothesis to test here (a null hypothesis) is that there's no difference between the mean weights of bullfrogs from Louisiana and Alabama. 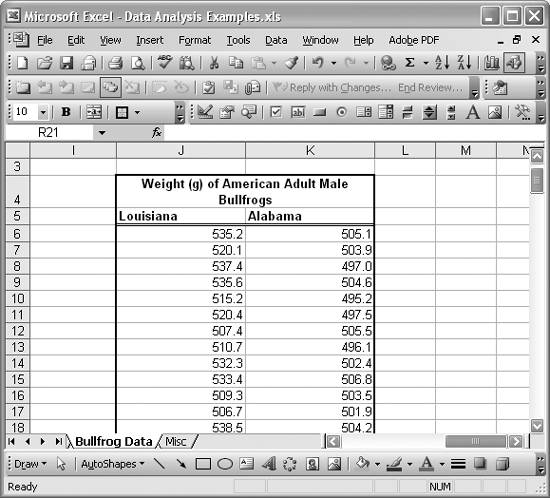 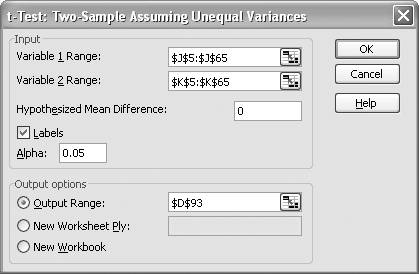 In the Variable 1 Range and Variable 2 Range fields, type (or select from the spreadsheet) the cell ranges containing the dataset corresponding to Louisiana and Alabama, respectively. In this example, I included the column labels in these input ranges, so I checked the Labels checkbox.

The hypothesis is that there is no difference between the means; therefore, enter a value of 0 in the Hypothesized Mean Difference field. In this example, I left the Alpha field (confidence field) at the default 5%; but you can change that as well. Finally, choose your output options. In this case, I chose to have the output on the same spreadsheet, starting at cell D93. Press OK; the results are shown in Figure 5-18. 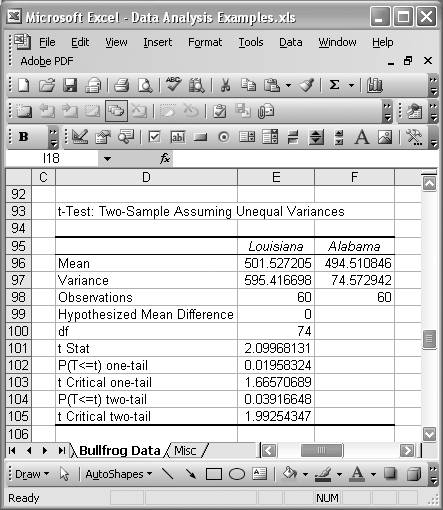 These results include computed means and variances for the two input datasets, along with other information such as the number of observations, the hypothesized mean difference, and the degrees of freedom. The t-statistic is also reported, along with both the one-tailed and two-tailed probabilities and critical values. In this case, the t-statistic is 2.1, which is greater than the two-tailed t-critical value, thus indicating there is a statistically significant difference in means between the two datasets. You can also see that the P-value is less than the significance level (Alpha value of 5% in this case), which also indicates rejection of the null hypothesis.

The other statistical test tools available in the Analysis ToolPak generate results that look very much like the ones shown in Figure 5-18.