As discussed in Recipe 8.3, the syntax for LINEST is {= LINEST(y-value cell range, x-value cell range, compute intercept, compute statistics)}. Braces surround this formula because it is an array formula. When you type this formula into a cell, you must press Ctrl-Shift-Enter to enter it. Further, you must select a grid of cells before typing and entering the formula. This is because LINEST returns an array of data containing the various statistics computed for the best-fit line. For multiple linear regression, the grid of cells you have to select must be n + 1 columns wide by 5 rows high, where n represents the number of independent variables in the data (the x-variables).

The first argument in LINEST is a cell range containing the y-values for the data to be fit, and the second argument is a cell range containing the x-values, which should be in multiple adjacent columns, corresponding to the number of independent variables in the data being fit. The third argument is a logical value (true or false) specifying whether or not to force the intercept of the fit line to pass through zero. If TRue, the intercept is calculated in the usual least-squares manner. If false, the intercept is forced to zero, with the slope computed accordingly. The fourth argument is a logical value indicating whether or not to display extended statistics for the best-fit line. These extended statistics include such things as standard errors and residual sums.

[*] NIST stands for National Institute of Standards and Technology. The data used here is from the NIST statistical reference library, which is freely available online. The data was originally prepared by J. W. Longley in 1967. See J. W. Longley, "An Appraisal of Least Squares Programs for the Electronic Computer from the Viewpoint of the user." Journal of the American Statistical Association 62 (1967): 819-841.

The steps for applying LINEST in this example are as follows:

The results are shown in Figure 8-8. I labeled the model parameters for clarity. Notice the R-square value shown in bold in Figure 8-8. A value of 0.995 represents a very good fit and agrees very well with the results published by the NIST for this dataset. 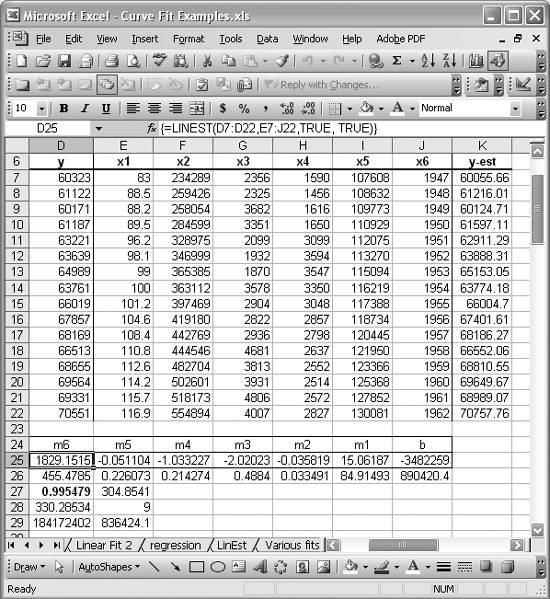 Read the help topic "LinEst" in Excel's online help for more details on the LINEST function. 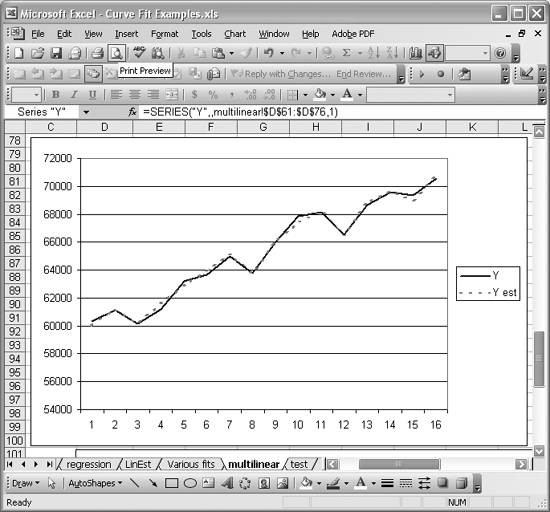