In previous chapters of this book, you learned how to draw graphics shapes, curves, and images. In all of these cases, the Graphics object is responsible for the drawing. When we're drawing graphics objects from within a menu or button click event handler, a call to the Invalidate method becomes imperative. If we don't call this method, the form will not paint itself, but if we write the same code on a form's OnPaint or paint event handler, there is no need to invalidate the form. In this section we will find out why that's so.

Paint event functionality is defined in the System.Windows.Forms.Control class, which is the base class for Windows Forms controls such as Label, ListBox, DataGrid, and TreeView. A paint event is fired when a control is redrawn. The Form class itself is inherited from the Control class. Figure 13.1 shows the Form class hierarchy.

The Control class also provides OnPaint methods, which can be overridden in the derived classes to fire the paint event. The signature of the OnPaint method is defined as follows:

Adding a paint event handler for any Control-derived class is pretty simple. We write an event handler that has two parameters, of types object and PaintEventArgs:

We can give the event handler whatever name we want. After implementing this event handler, we use the parameter args (which is a PaintEventArgs object) to get the Graphics object for the control. The following code delegates the event handler for the Paint event:

The following code gives the paint event handler for a form:

Now we can use the PaintEventArgs object to get the Graphics object associated with the form and use the Graphics object's methods and properties to draw and fill lines, curves, shapes, text, and images. Let's draw a rectangle, an ellipse, and some text on the form, as shown in Listing 13.1.

Figure 13.2 shows the output from Listing 13.1. Now if the form is covered by another window and the focus returns to the form, the code on the paint event handler will repaint the form. 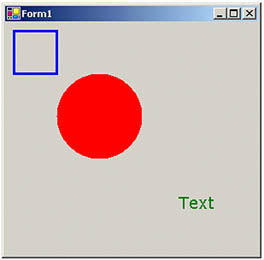 Let's add DataGrid and Button controls to a form. We will use the button and the data grid as our drawing canvases. Listing 13.2 adds the paint event methods of our Button1 and DataGrid1 controls.

Listing 13.3 gives the code for the Button and DataGrid paint event handlers. This code is useful when we need to draw graphics shapes on a control itself. For example, a column of a data grid can be used to display images or graphics shapes. In our example we draw an ellipse on these controls, instead of drawing on a form. The PaintEventArgs.Graphics object represents the Graphics object associated with a particular control. Once you have the Graphics object of a control, you are free to call its draw and fill methods.

Figure 13.3 shows the output of Listing 13.3. As you can see, a button or a data grid can function as a drawing canvas. The top left-hand corner of a control is the (0, 0) coordinate of the canvas associated with that control. 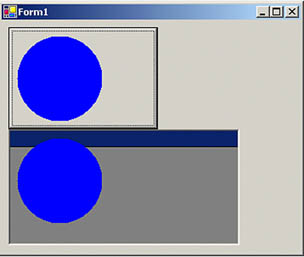 At this stage it is worth pointing out another big advantage that GDI+ has over GDI: the flexibility to have a Graphics object associated with a control.

13.1.4 Overriding the OnPaint Method of a Form

We have already seen this in previous chapters. We can override the OnPaint method by defining it as follows:

Then we can use the Graphics property of PaintEventArgs to draw lines, shapes, text, and images. Listing 13.4 draws a few graphics shapes and text on our form's OnPaint method. To test this code, create a Windows application and add the code to it.

It is usually good programming practice to dispose of objects when you're finished using them. But it may not always be the best practice. A Graphics object must always be disposed of if it was created via the CreateGraphics method or other "CreateFrom" methods. If we use a Graphics object on a paint event or the OnPaint method from the PaintEventArgs.Graphics property, we do not have to dispose of it.

Do not dispose of Graphics objects associated with Windows controls such as Button, ListBox, or DataGrid.

In Web pages, it is always good practice to dispose of objects as soon as they are done being used.

13.1.8 Scope and Type of Variables and Performance

One of the best programming practices is the efficient use of variables and their scope. Before adding a new variable to a program, think for a second and ask yourself, "Do I really need this variable?" If you need a variable, do you really need it right now? The scope of variables and use of complex calculations can easily degrade the performance of your applications. Using global scope for pens, brushes, paths, and other objects may be useful instead of defining variables in the OnPaint or OnPaintBackground methods.

Let's look at a practical example: Listing 13.5 is written on a form's paint event handler, which creates pens and brushes, and draws rectangles and polygons.

In this example we define many variables, all of local scope. Throughout the application, the redPen, hatchBrush, hatchPen, brush, and other variables remain the same. Programmatically, it doesn't matter whether we define these variables locally or globally; the choice depends entirely on the application. It may be better to have variables defined with a global scope. If you repaint the form frequently, defining these variables globally may improve performance because time will not be wasted on re-creating the objects for each pass. On the other hand, defining objects globally may consume more resources (memory).

It is also good to avoid lengthy calculations in frequently called routines. Here's an example: Listing 13.6 draws a line in a loop. As you can see, int x and int y are defined inside the loop.

Listing 13.6 Defining variables inside a loop

We can easily replace the code in Listing 13.6 with Listing 13.7, which is more efficient. If a code statement does the same thing every time a control reaches it inside a loop, it is a good idea to move that statement outside the loop to save processing cycles.

Listing 13.7 Defining variables outside a loop

A well-designed and well-coded application also plays a vital role in performance. For example, replacing multiple if statements with a single case statement may improve performance.

Working with Brushes and Pens

Appendix A. Exception Handling in .NET