In this section we will concentrate on fonts. The discussion starts with a description of the types of fonts in the Windows operating system, followed by a little background material on fonts. After these basic concepts are covered, the discussion turns to how fonts are handled in GDI+ and .NET. 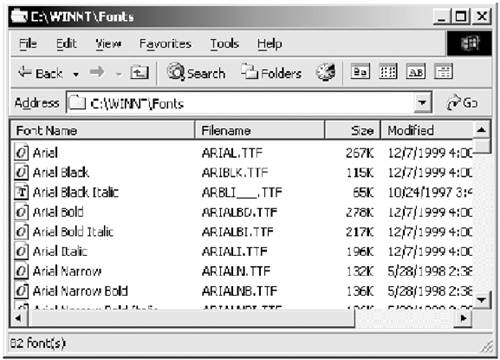 GDI fonts can be further divided into four major categories: raster, stroke, TrueType, and OpenType. The raster and stroke fonts are the oldest way to display text (they pre-date Windows 3.1!). Raster fonts (also known as bitmap fonts) store each character in pixel format. Each raster font is designed for a specific aspect ratio and character size, which are generally not scalable to other sizes. The main advantage of raster fonts is high performance because rendering a raster font usually just requires copying it to video memory. Raster fonts support boldface, italics, underlining, and strikethrough formatting.

Stroke fonts (also known as vector fonts) are defined as a series of lines and dotsin much the same way that characters are drawn with a pen plotter. Stroke fonts are thus quite scalable (they can be increased or decreased to any size), and they can be used with output devices of any resolution. Examples of stroke fonts include Modern, Roman, and Script. Like raster fonts, stroke fonts support boldface, italics, underlining, and strikethrough formatting.

Next we come to TrueType fonts, which were developed by Apple and Microsoft and are supported by many manufacturers. TrueType fonts are also called outline fonts because the individual characters are defined by filled outlines of straight lines and curves. Altering the coordinates that define the outlines provides great scalability. The original 13 TrueType fonts were 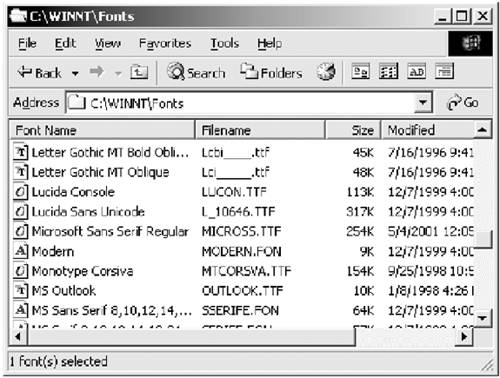 The file extension of both TrueType and OpenType fonts is .ttf. If you double-click on the Verdana OpenType font file, it displays the information shown in Figure 5.7. 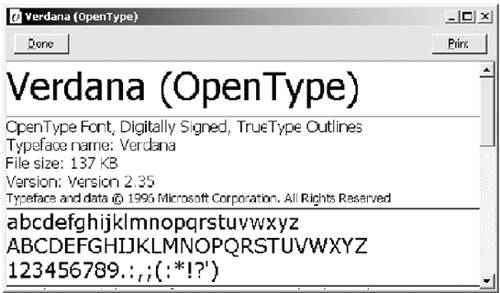 The Arial Black Italic TrueType font file, on the other hand, looks like Figure 5.8. 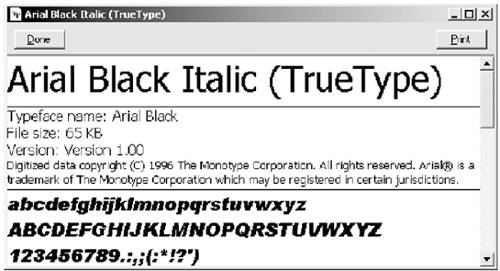 In 1998, Microsoft announced a new display technology called ClearType. ClearType increases the readability and smoothness of text on existing LCDs (liquid crystal displays), such as laptop screens, flat-screen monitors, and Pocket PC screens. In normal displays, a pixel has only two states: on and off. ClearType technology adds additional information to a pixel besides the on and off states. With ClearType, the words on the display device look almost as sharp and clear as those on the printed page.

Generally, when we talk about a font, we are referring to more than just one component. A typical font is a combination of three components: font family, font style, and font size. Figure 5.9 shows the components of a typical font.

A complete example of a font is "Times New Roman, size 10, Bold|Italic". Here the font family is Times New Roman, the size is 10-point, and the style is both bold and italic.

The size of a font is expressed in points, where a point is usually 1/72 (0.013888) inch. The measurement of the size of a font is a little confusing because characters have different heights. If all alphabetic characters had the same height, it would be easier to calculate the size of a font. For example, consider the characters b and q. Technically they have the same height (or size), but they are situated in different locations along a straight line. In other words, the character's size may not be the same as the point size, also called em size. The font size is related to the line spacing. We will discuss line spacing in more detail in Section 5.3.4.

Before we use fonts and draw text, let's see what classes GDI+ provides related to text and fonts, and how to use them.

The Font class provides functionality for fonts, including methods and properties to define functionalities such as font style, size, name, and conversions. Before we discuss the Font class, we will introduce the FontStyle enumeration and the FontFamily class, which we will use to create Font objects.

The FontStyle enumeration defines the common styles of a font. The members of FontStyle are described in Table 5.4.

The GetFamilies method of the FontCollection class returns all families, as we will discuss in Section 5.6.

Table 5.6 describes the methods of the FontFamily class.

Table 5.6 introduces some new terms, including base line, ascent, and descent. Let's see what they mean. Figure 5.10 shows a typical font in Windows. As you can see, although the letters b and q are the same size, their starting points and ending points (top and bottom locations) are different. The total height of a fontincluding ascent, descent, and extra spaceis called the line spacing. Ascent is the height above the base line, and descent is the height below the base line. As Figure 5.10 shows, two characters may have different positions along the base line. For some fonts, the extra value is 0, but for others it is not.

In addition to these get methods, the Font class provides GetHeight, which returns the height of a Font object.

As Listing 5.6 shows, we use GetLineSpacing, GetLineAscent, GetLineDescent, and GetEmHeight to get line spacing, ascent, descent, and font height, respectively, and then we display the output in a message box.

The members of the GraphicsUnit enumeration are described in Table 5.7.

The Font class combines a font and methods and properties to define functionalities such as font style, size, name, and conversions. Table 5.8 describes the properties of the Font class.

The following code creates a Font object of font family Arial with size 16 and uses the Font class properties to find out the details of the Font object.

In the following example, you must import the GDI library by adding the following code at the beginning of your class before using any GDI fonts, because we will be using GetStockObject:

The Font class provides more than a dozen overloaded constructors, which allow an application to construct a Font object in different ways, either from string names of a font family and size or from a FontFamily object with font style and optional GraphicsUnit values.

The simplest way to create a Font object is to pass the font family name as the first argument and the point size as the second argument of the Font constructor. The following code snippet creates a Times New Roman 12-point font:

As the code example here shows, you can use the FontStyle and GraphicsUnit enumerations to define the style and units of a font, respectively.

If you don't want to create and use a FontFamily object in constructing a font, you can pass the font family name and size directly when you create a new Font object. The following code snippet creates three fonts from the Verdana, Arial, and Tahoma font families, respectively, with different sizes and styles:

Working with Brushes and Pens

Appendix A. Exception Handling in .NET