In this chapter, you find out how to work with XML-the best thing to happen to computing since the invention of the vacuum tubes, at least according to some over-enthusiastic prognosticators.

This chapter focuses on the basics of reading an XML document into memory and extracting data from it. With the background in this chapter, you shouldn't have much trouble studying the API documentation on your own to learn more about XML programming.

What Exactly Is XML, Anyway?

Most computer industry pundits agree that XML will completely change the way you work with computers. Here are just some of the ways XML will revolutionize the world of computers:

So what is XML, really? Simply put, XML is a way to store and exchange information in a standardized way that's easy to create, retrieve, and transfer between different types of computer systems or programs.

When XML is stored in a file, the file is usually given the extension xml.

Like HTML, XML uses tags to mark the data. For example, here's a bit of XML that describes a book:

This chunk of XML defines an element called Book, which contains information for a single book. The Book element, in turn, contains two subordinate elements: Title and Author.

Notice how each element begins with a tag that lists the element's name. This tag is called the start tag. The element ends with an element that repeats the element name, preceded by a slash (an end tag).

Everything that appears between the start tag and the end tag is the element's content. An element's content can consist of text data, or it can consist of one or more additional elements. In the latter case, the additional elements nested within an element are called child elements, and the element that contains them is called the parent element.

Whether you use attributes or child elements is largely a matter of personal preference. Many XML purists say that you should avoid attributes, or use them only for identifying data such as identification numbers or codes. Others say to use attributes freely. In my experience, a few attributes here and there don't hurt, but I avoid them for the most part.

For your reference, Listing 5-1 shows the movies.xml file that the programs that appear later in this chapter use.

For example, a DTD for an XML document about movies may specify that each Movie element must have Title and Price subelements and an attribute named year. It can also specify that the root element is named Movies and consists of any number of Movie elements.

You can store the DTD for an XML document in the same file as the XML data, but more often you store the DTD in a separate file. That way, you can use a DTD to govern the format of several XML documents of the same type. To indicate the name of the file that contains the DTD, you add a tag to the XML document. Here's an example:

Here the XML file is identified as a Movies document, whose DTD you can find in the file movies.dtd. Add this tag near the beginning of the movies.xml file, right after the tag.

Listing 5-2 shows a DTD file for the movies.xml file that was shown in Listing 5-1.

Listing 5-2: A DTD File for the movies.xml File

Use the rules listed in Table 5-1 to express the content.

The ATTLIST tag provides the name of each attribute. Its general form is this:

Here's a breakdown of this tag:

This declaration indicates that the attribute goes with the Movie element, is named year, can be any kind of data, and is required.

Here's an ATTLIST tag that specifies a list of possible values along with a default:

This form of the ATTLIST tag lets you create an attribute that's similar to an enumeration, with a list of acceptable values.

In general, you can process XML documents in a Java program with two approaches. These two approaches are referred to as DOM and SAX:

In this chapter, I cover the basics of using DOM to retrieve information from an XML document. DOM represents an XML document in memory as a tree of Node objects. For example, Figure 5-1 shows a simplified DOM tree for an XML document that has two Movie elements. Notice that the root element (Movies) is a node, each Movie element is a node, and each Title and Price element is a node. In addition, text values are stored as child nodes of the elements they belong to. Thus, the Title and Price elements each have a child node that contains the text for these elements. 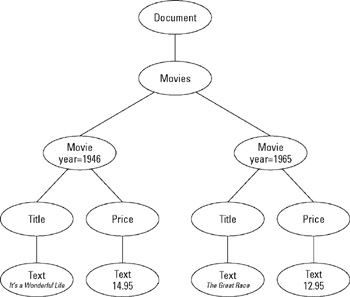 Before you can process a DOM document, you have to read the document into memory from an XML file. You'd think that would be a fairly straightforward proposition, but unfortunately it involves some pretty strange incantations. Rather than go through all the classes and methods you have to use, I just look at the finished code for a complete method that accepts a String that contains a filename as a parameter and returns a document object as its return value. Along the way, you find out what each class and method does.

After you get a document builder factory, you can configure it so it reads the document the way you want. The next three statements configure three options that are applied to document builders created by this factory object:

Here's a closer look at these statements:

Creating a document builder and the document

After you set the options, you can call the newDocumentBuilder method to create a document builder:

Here the document builder is referenced by a variable named builder.

Note that several of these methods throw exceptions. In particular, newDocumentBuilder throws ParserConfigurationException and parse throws IOException and SAXException. To keep this example simple, I caught all exceptions in one catch clause and printed the exceptions message to the console.

By adding the getDocument method, you can create a DOM document from a file with a single statement, like this:

Here the movies.xml file is read and a DOM document is created and assigned to the doc variable.

Also, note that you must provide three import statements to use the getDocument method:

After you have a DOM document in memory, you can easily retrieve data from the document's nodes. The DOM API is based on interfaces rather than classes, so each node of the DOM document is represented by an object that implements one or more DOM interfaces. The following paragraphs give you an overview of the interfaces you need to work with:

Assuming you use a DTD to validate the XML file when you build the document, you can usually navigate your way around the document to pick up information you need without resorting to NodeList objects. For example, here's a routine that simply counts all the Movie elements in the movies.xml file (shown earlier in Listing 5-1) after it's been parsed into a Document object named doc:

If you run a program that contains these lines, the following line appears on the console:

An alternative way to process all the elements in the movies.xml file is to use the getChildNodes method to return a NodeList object that contains all the elements. You can then use a for loop to access each element individually. For example, here's a snippet of code that lists the name of each element:

Here the item method is used in the for loop to retrieve each Movie element. If you run a program that contains these lines, ten lines with the word Movie are displayed in the console window.

To get the value of an element's attribute, call the getAttribute method and pass the name of the attribute as the parameter. This returns the string value of the attribute. You can then convert this value to another type if necessary. Note that the value may include some white space, so you should run the value through the trim method to get rid of any superfluous white space.

The year attribute is extracted with these two lines of code:

The first line gets the string value of the year attribute, and the second line converts it to an int.

Notice the extra casting that's done in this method. It's necessary because the movie variable has to be an Element type so you can call the getAttribute method. However, the getNextSibling method returns a Node, not an Element. As a result, the compiler doesn't let you assign the node to the movie variable unless you first cast it to an Element.

You might be surprised to learn that the text content of an element is not stored with the element. Instead, it's stored in a child node of type Text. For example, consider the following XML:

This element results in two nodes in the XML document: an Element node named Title, and a Text node that contains the text The Princess Bride.

Thus, if you have a Title element in hand, you must first get the Text element before you can get the text content. For example:

If you prefer to write your code a little more tersely, you can do it in a single statement like this:

If you find this incantation a little tedious and you're doing a lot of it in your program, write yourself a little helper method. For example:

Then you can get the text content for an element by calling the getTextValue method, like this:

After you get the text content, you can parse it to a numeric type if you need to.

Putting It All Together A Program That Lists Movies

Now that you've seen the various interfaces and classes you use to get data from an XML file, Listing 5-3 shows a complete program that reads the movies.xml file (shown earlier in Listing 5-1) and lists the title, year, and price of each movie on the console. When you run this program, the following appears on the console: