What Is Object Oriented Programming?

Here are some additional thoughts about the notion of computer programs being simulations of real-world objects or abstract concepts:

All this talk of simulations is getting a little existential for me, so now I'm turning to the nature of the objects that make up object-oriented programming. Objects-both in the real world and in the world of programming-are entities that have certain basic characteristics. The following sections describe some of the more important of these characteristics: identity, type, state, and behavior.

Every object in an object-oriented program has an identity. In other words, every occurrence of a particular type of object-called an instance-can be distinguished from every other occurrence of the same type of object, as well as from objects of other types.

In the real world, object identity is a pretty intuitive and obvious concept. Pick up two apples, and you know that although both of them are apples (that's the object type, described in the next section), you know they aren't the same apple. Each has a distinct identity. They're both roughly the same color, but not exactly. They're both roundish, but have minor variations in shape. Either one (or both) could have a worm inside.

Open a file cabinet that's full of invoices and you find page after page of papers that look almost identical to one another. However, each one has an invoice number printed somewhere near the top of the page. This number isn't what actually gives each of these invoices a unique identity, but it gives you an easy way to identify each individual invoice, just as your name gives others an easy way to identify you.

In object-oriented programming, each object has its own location in the computer's memory. Thus two objects, even though they may be of the same type, have their own distinct memory locations. The address of the starting location for an object provides us with a way of distinguishing one object from another, because no two objects can occupy the same location in memory.

Here are a few other important thoughts about object identity in Java:

I remember studying Naming of Parts, a fine poem written by Henry Reed in 1942, back when I was an English major in college:

Today we have naming of parts. Yesterday,

We had daily cleaning. And tomorrow morning,

We shall have what to do after firing. But today,

Today we have naming of parts. Japonica

Glistens like coral in all of the neighboring gardens,

And today we have naming of parts.

Sure, it's a fine anti-war poem and all that, but it's also a little instructive about object-oriented programming. After the first stanza, the poem goes on to name the parts of a rifle:

This is the lower sling swivel. And this

Is the upper sling swivel, whose use you will see,

When you are given your slings. And this is the piling swivel,

Which in your case you have not got.

Like the drill sergeant in this poem, object-oriented programming lets you assign names to the different kind of objects in a program. In Java, types are defined by classes. So when you create an object from a type, you're saying that the object is of the type specified by the class. For example, the following statement creates an object of type Invoice:

In this case, the identity of this object (that is, its address in memory) is assigned to the variable i, which the compiler knows can hold references to objects of type Invoice.

In object-oriented terms, Dr. Seuss here is enumerating a pair of objects of type Fish. The Fish type apparently has two attributes-call them number and color. These two objects have differing values for these attributes:

The combination of the values for all the attributes of an object is called the object's state. Unlike its identity, an object's state can and usually does change over its lifetime. For example, some fish can change colors. The total sales for a particular customer changes each time the customer buys another product. The grade-point average for a student changes each time a new class grade is recorded. And the address and phone number of an employee change if the employee moves.

Here are a few more interesting details about object state:

Another characteristic of objects is that they have behavior, which means they can do things. Like state, the specific behavior of an object depends on its type. But unlike state, the behavior isn't different for each instance of a type. For example, suppose all the students in a classroom have calculators of the same type. Ask them all to pull out the calculators and add two numbers-any two numbers of their choosing. All the calculators display a different number, but they all add in the same way-they all have a different state but the same behavior.

In Java, the behavior of an object is provided by its methods. Thus, the format method of the NumberFormat class is what provides the formatting behavior for NumberFormat objects.

Here are a few other notable points about object behavior:

The Life Cycle of an Object

As you work with objects in Java, understanding how objects are born, live their lives, and die is important. This topic is called the life cycle of an object, and it goes something like this:

So far, most of the classes you've seen in this book have created objects that stand on their own, each being a little island unto itself. However, the real power of object-oriented programming lies in its ability to create classes that describe objects that are closely related to each other.

If you're creating a program that simulated the way baseballs and softballs work, you need a way to represent these two types of balls. One option is to create separate classes to represent each type of ball. These classes are similar, so you can just copy most of the code from one class to the other.

Another option is to use a single class to represent both types of balls. Then, you pass a parameter to the constructor to indicate whether an instance of the class behaves like a baseball or like a softball.

However, Java has two object-oriented programming features that are designed specifically to handle classes that are related like this: inheritance and interfaces. I briefly describe these features in the following sections.

Inheritance is an object-oriented programming technique that lets you use one class as the basis for another. The existing class is called the base class, superclass, or parent class; the new class that's derived from it is called the derived class, subclass, or child class.

You could use inheritance to solve the baseball/softball problem from the previous section by creating a class named Ball that provides the basic features of all types of balls, and then using it as the base class for separate classes named BaseBall and SoftBall. Then, these classes could override the methods that need to behave differently for each type of ball.

You could use an interface to solve the baseball/softball problem by creating an interface named Ball that specifies all the methods and fields that a ball should have. Then, you could create the SoftBall and BaseBall classes so that they both implement the Ball interface.

Interfaces are closely related to inheritance, but have two key differences:

You find out about interfaces in Book III, Chapter 5.

Designing a Program with Objects

An object-oriented program usually isn't just a single object. Instead, it's a group of objects that work together to get a job done. The most important part of developing an object-oriented program is designing the classes that are used to create the program's objects. The basic idea is to break a large problem down into a set of classes that are each manageable in size and complexity. Then, you write the Java code that implements those classes.

One common way to design object-oriented applications is to divide the application into several distinct layers or tiers that provide distinct types of functions. The most common is a three-layered approach, as shown in Figure 1-1. Here the objects of an application are split up into three basic layers: 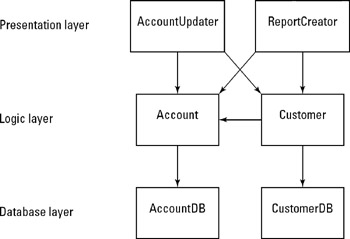 Since the very beginning of computer programming, programmers have loved to create diagrams of their programs. Originally, they drew flowcharts that graphically represented a program's procedural logic.

Flowcharts were good at diagramming procedures, but they were way too detailed. When the Structured Programming craze hit in the 1970s and programmers started thinking about the overall structure of their programs, they switched from flowcharts to structure charts, which illustrated the organizational relationships among the modules of a program or system. 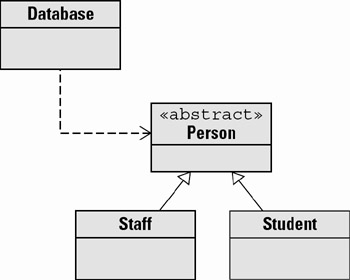 You can draw class diagrams in many ways. To add some consistency to their diagrams, most programmers use a standard called UML, which stands for Unified Modeling Language. The class diagram in Figure 1-2 is an example of a simple UML diagram, but UML diagrams can get much more complicated than this example.

The following sections describe the details of creating UML class diagrams. Note that these sections don't even come close to explaining all the features of UML. I include just the basics of creating UML class diagrams so that you can make some sense of UML diagrams when you see them, and so that you know how to draw simple class diagrams to help you design the class structure for your applications. If you're interested in digging deeper into UML, check out UML 2 For Dummies by Michael Jesse Chonoles and James A. Schardt (Wiley Publishing, Inc.).

The basic element in a class diagram is a class. In UML, each class is drawn as a rectangle. At the minimum, the rectangle must include the class name. However, you can subdivide the rectangle into two or three compartments that can contain additional information about the class, as shown in Figure 1-3. 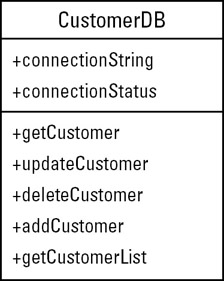 If you want, you can include type information for variables as well as for methods and parameters. The type of a variable is indicated by following the variable name with a colon and the type:

A method's return type is indicated in the same way:

Parameters are listed within the parentheses, and both the name and type are listed. For example:

Besides rectangles to represent classes, class diagrams also include arrows to represent relationships among classes. UML uses a variety of different types of arrows, as I describe in the following paragraphs.

A solid line with a hollow closed arrow at one end represents inheritance:

The arrow points to the base class. A dashed line with a hollow close arrow at one end indicates that a class implements an interface:

The arrow points to the interface. A solid line with an open arrow indicates an association: