Eclipse is a development environment that includes many powerful features for creating Java programs. Because Eclipse is free and very powerful, it has become popular among Java developers. In this chapter, you discover the basics of using Eclipse for simple Java development.

When you're ready to get started with Eclipse, go to the Eclipse Web site (http://www.eclipse.org), click the Download Eclipse button, and download the current version of Eclipse. Unlike most programs, Eclipse doesn't have a complicated setup program. You just download the Eclipse Zip file, extract all the files, and then run the Eclipse executable file (eclipse.exe) directly from the folder you extracted it to.

Note that many of the techniques I describe in this chapter won't make much sense to you until you learn how to use the Java programming features they apply to. For example, the information about how to create a new Java class file won't make much sense until you learn about creating Java classes in Book III. As you learn about Java programming features in later chapters, you may want to refer back to this chapter to learn about related Eclipse features.

If you plan on using Eclipse, I suggest you pick up a copy of Eclipse For Dummies by Barry Burd (Wiley Publishing, Inc.).

Getting Some Perspective on Eclipse

Eclipse is designed to be a general-purpose development environment, which means that it isn't specifically designed for Java. It's like the Seinfeld of IDEs: As its own designers put it, Eclipse is "an IDE for anything and nothing in particular." You can easily customize Eclipse with plug-in components called features that make it useful for specific types of development tasks. And because Eclipse is most commonly used for Java program development, it comes pre-configured with features designed for developing Java programs.

Eclipse uses some unusual terminology to describe its basic operation. These terms, in particular, are worth a look: 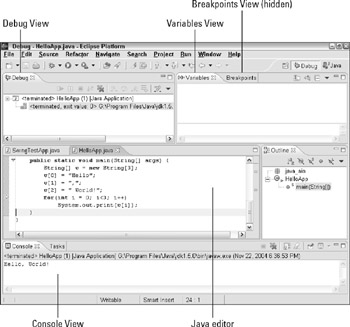 Figure 4-2: Debugging a program in Eclipse.

A project consists not just of Java source files, but also the class files that are created when you compile the project and any other files that the program requires. That might include data files or configuration files, as well as other files such as readme files, program documentation, image files, sound files, and so on.

All your project folders are stored in a folder called the workspace. Each time you start Eclipse, a dialog box appears asking for the location of the workspace folder. If you want to change to a different workspace, use File

The following procedure takes you step by step through the process of creating a simple project based on a slightly more complicated version of the Hello, World! program from Book I, Chapter 1. Follow these steps to create this application:

In this section, I walk you through the process of adding a second class file to the HelloApp application to demonstrate some of Eclipse's most useful features for speeding up Java program development by generating code for commonly used class features.

So follow these steps to add a second class to the HelloApp application:

The entire HelloApp.java class now looks like Listing 4-2. Eclipse generated all the code except the two lines within the main method.

The entire HelloSayer class file is shown in Listing 4-1.

After you enter the source code for your Eclipse project, you can run it to see if it works as expected. Eclipse has several ways to run a Java program:

When the program runs, its console output is displayed in a Console View that appears beneath the Java Editor pane, as shown in Figure 4-10. 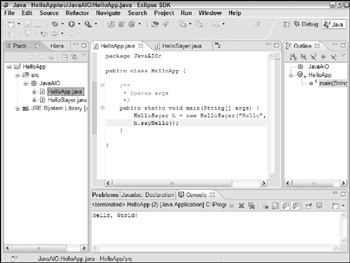 No matter how carefully you plan your programs, sooner or later you encounter bugs. You need to watch out for basically two kinds of bugs: 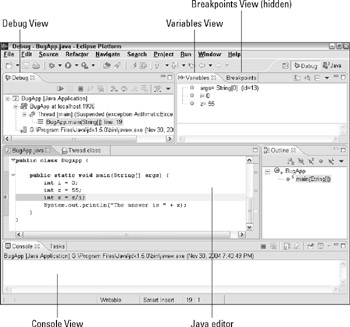 The following sections describe some of the key features of the Debug perspective that are useful for tracking down and correcting bugs in your Java programs.

Stepping through your programs

One of the most basic skills for debugging is executing program statements one at a time. This is called stepping, and it can be a very useful debugging technique. By stepping through your program one statement at a time, you can view the effects of each statement and identify the source of errors. Sometimes just knowing which statements are being executed is all you need to determine why your program isn't working.

In Eclipse, the Debug View section of the Debug perspective is where you control the execution of the program you're debugging. This view displays a tree that indicates each of the threads in your program. (If you don't know what threads are, don't worry about it. Most console-based programs, such as the BugApp program shown in Figure 4-11, use only one thread apiece anyway. You find out how to code programs that use more than one thread in Book V.)

Before you can control the execution of a thread, you must first suspend the thread so that its statements stop executing. In general, you can suspend a thread for debugging three ways:

When you suspend a thread, the statement that will be executed next is highlighted in the Java editor. Then, you can continue the thread's execution one or more statements at a time by clicking the buttons at the top of the Debug View. Table 4-1 describes the most commonly used buttons.

When a thread is suspended, you can examine its variables to see if they're set to the values you expect. In many cases, you can discover programming errors. For example, if you think a variable named customerFirstName should contain a customer's first name and instead it contains the name of the state in which the customer lives, you can conclude that you didn't assign the variable's value properly. (Of course, this might be ambiguous if the customer happens to be named Indiana Jones.)

You can also inspect variables by using the Variables View, as shown in Figure 4-13. Each variable is listed on a separate line in the top part of the Variables View. In addition, the bottom part (called the Detail pane) displays the value of the currently selected variable. Note that as you step through the various statements in your program, variables appear in the Variables View as they are declared and they disappear from view when they go out of scope.

Figure 4-13: The Variables View shows the value of each variable.

All the breakpoints in your program are listed in Breakpoints View, as shown in Figure 4-14. The following paragraphs describe some of the ways you can work with breakpoints in this view:

Figure 4-14: The Breakpoints View is where you control breakpoints.

Refactoring refers to the task of making mass changes to a project. For example, suppose you decide that a class name you created when you started the project doesn't really accurately describe the purpose of the class, so you want to change it. Simple text editors, such as TextPad, include a Replace command that lets you change occurrences of text strings within a file, but changing the name of a class requires that you change the name in all the files in a project.

Eclipse includes a whole menu of refactoring options-called, as you might guess, the Refactor menu. This menu contains more than 20 different types of refactoring commands. If you're just starting to learn Java, most of these commands won't make any sense to you. For example, the Refactor menu contains commands that let you change an anonymous inner class to a nested class, push members down to a subclass, or introduce a factory.

A few Refactor menu commands are especially useful as you work your way through the basics of learning Java. In particular, these: