In this chapter, you learn about:

After completing this chapter, you should able to write, run, and deploy SWT/JFace-based Java programs.

Before you start programming with SWT/JFace, you have to download SWT/JFace packages and configure your Java IDEs.

If you plan to use SWT only, all you need to do is download the latest SWT binary and source code. If JFace is required, you can do one of the following:

SWT/JFace does not depend on the Eclipse workbench, so you do not have to use Eclipse as your Java IDE. Here, you learn how to configure your IDEs to develop SWT/JFace-based programs.

Setting up the classpath in JBuilder is very similar to doing it in Eclipse:

You have already set up your IDEs, and now you can develop your first SWT program.

The following code is probably the simplest SWT program. When it is executed, a window with the title "Hello, world!" pops up, as shown in Figure 3-3.

After the shell is created, set the window title by calling its setText method. Then open the shell by calling the open method, and a window appears immediately when this line is executed. Finally, set up an event loop to listen and react to events. When the user closes the window, the shell is disposed of and the event loop is broken. The program exits right after the disposal of the Display object.

If you do not have any experience with native UI programming, you may be confused about the event loop. It simply reads and dispatches events. Details on the SWT event handling mechanism are covered thoroughly in Chapter 4.

As you saw in previous chapters, SWT employs JNI mechanisms to communicate with the underlying native window systems. Before you run your SWT programs, make sure your JRE can find those native libraries that SWT depends on. Otherwise, you may encounter the following exception:

To avoid such exceptions, add the directory containing the required native libraries to your Java library path.

The native library required by SWT is located at the following directory (this directory will be referred to as $SWT_NATIVE_LIBRARY_PATH):

The native library directory for Windows (Windows on x86) is:

and its Linux counterpart (Linux on x86) is:

You need to add the following virtual machine (VM) argument when you run SWT/JFace-based programs:

If you need to run SWT programs from the Eclipse workbench, you can add the argument in the Run dialog, as shown in Figure 3-4. 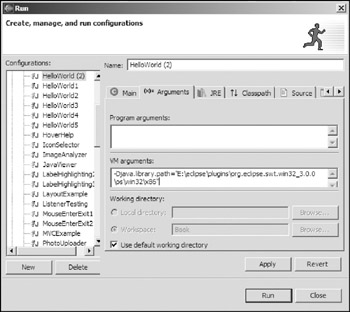 You can configure other IDEs in the same way.

On Linux: Adding the SWT native library path to the $LD_LIBRARY_PATH variable. Execute the following commands:

You can append these commands to the startup files of the corresponding shells to set the variable automatically on each subsequent login. If you take this approach, you do not have to specify the SWT native library path whenever you run an SWT/JFace-based application.

The Hello World program does nothing but print the window title. Let's create some practical application with SWT. Here, you are going to create a temperature converter that can convert temperature readings in Fahrenheit into their Celsius equivalents and vice versa. The GUI of this application is shown in Figure 3-5. When a user types a temperature reading in the Fahrenheit text field, its equivalent Celsius value will be displayed in the Celsius text field. The same mechanism applies to Celsius-to-Fahrenheit conversion.

First, declare the class and all widget controls to be used:

SWT classes such as Button and Label share the same names with their AWT counterparts. One of the common mistakes is using AWT components in SWT programs. So make sure you import widgets from SWT/JFace packages instead of AWT packages.

For this application, you put all the GUI construction code in the constructor:

At the beginning of the constructor, you set the title of the shell and its layout. A layout defines a positioning algorithm applying to the children of a composite whenever it's resized. Here, you set a RowLayout instance as the shell's layout. The RowLayout class is a layout placing all the child widgets either in horizontal rows or vertical columns with the composite. Chapter 6 is dedicated to SWT layouts.

After the layout of the shell has been set, you can add all the widgets that you need. To do that, you simply put the shell as the first argument in constructors of those widgets. The style of a widget can usually be specified in the second argument. A label is added to the shell to display status information.

To enable the application and react to the user's input, you need to use event listeners to listen to interested events and react accordingly. In this application, you need to listen to text modification events generated from both text fields. A ModifyListener is created and registered to both text fields to listen to modification events. When the user modifies the content of any of the text fields, the function modifyText in the listener will be called with a ModifyEvent object. Then the function makes a call to the custom function valueChanged.

Finally, you open the shell and set up the event loop.

When a Text's setText is called programmatically, the Text generates a ModifyEvent. The current focus control check at the beginning of the valueChanged method helps to prevent the event handling deadlock.

To launch the application, simply using the following main method:

Rewriting the Temperature Converter with JFace

In the previous section, you created your first few SWT-based programs. Now rewrite the temperature converter application using JFace to see how JFace can make your life easier.

The first thing you may notice is that the TemperatureConverterJFace class is inherited from the org.eclipse.jface.window.ApplicationWindow class. An ApplicationWindow instance is a high-level "main window," which has built-in support for an optional menu bar, an optional toolbar, and an optional status line. It also wraps the event loop inside itself. In the constructor of the TemperatureConverterJFace class, a null parent is passed to the super class's constructor, indicating that this window is a top-level window. The addStatusLines method adds a status line to the window for the purpose of displaying messages.

In order to add temperature conversion widgets to the window, you need to override the createContents method:

The preceding GUI-building code is very similar to that used in the SWT version of the temperature converter. The method createContents(Composite parent) will be called after all other widgets (optional menus, toolbars, status line, and so on) have been created and before the window is opened. The parent argument passed is the shell instance representing the window. The expected return type for this method is Control. If you need to add multiple widgets, you should create a top-level composite containing all the widgets and return the composite, as shown in the preceding code.

The event listener registration procedure is the same as that using SWT. There are some minor changes in the valueChanged method:

The setStatus method in ApplicationWindow is used to set the message to be displayed on the status line. In the SWT version, you create a Label object and use its setText method; here, the ApplicationWindow manages this for you.

The GUI of this JFace implementation (as shown in Figure 3-6) is more appealing than that of the SWT implementation, especially the status line part.

Besides the status line, ApplicationWindow can help you to simplify other common tasks such as menu creation and toolbar creation, which is covered in later chapters.

Let's deploy the JFace implementation of the temperature converter to Windows (Windows 98, NT, ME, XP) and Linux step by step.

Identifying Files to be Deployed

The files to be deployed include the TemperatureConverterJFace class file and the required SWT/JFace packages and SWT native libraries, as shown in the following table.

According to the Java Web Start Specification, applications with unsigned JAR files are restricted to run in a secure sandbox, which prevents them from calling native libraries. Because the temperature converter application depends on the SWT native libraries, you have to sign all the files to remove this restriction.

The Java Web Start Specification requires that all applications be delivered as a set of JAR files, so you have to package non-JAR files into a set of JAR files. Because the Java libraries of SWT/JFace are already in the JAR format, there are only two kinds of files you need to pack up into JAR files:

You need to download and unzip both Windows and Linux releases of Eclipse SDK regardless of the type of operating system you're running. In the preceding commands, $ECLIPSE_WIN32_HOME and $ECLIPSE_LINUX_HOME represent the home directories of the Eclipse SDK Windows release and the Linux release, respectively.

Now all the files to be deployed are packed, as shown in the following table.

The preceding command creates a public key, a private key, and a self-signed certificate in the file dummy.keystore. However, I recommend that you obtain a certificate from a certificate authority and that you use it in production.

Now, you can sign each JAR file using the jarsigner tool:

Now, all the files are ready to be deployed. You can arrange the files into the following structure:

Let's write a JNLP script that will be used to inform the Java Web Start software on the client machines about the temperature converter application. Such details such as the title and vendor of the application, required resources, and main class are included in the JNLP script as follows:

The top-level element in a JNLP file is . In the preceding code, specify the following attributes:

The information element is used to provide information about the application, such as its title, description, and icon.

Next, request the Java Web Start software to grant the application all the permissions:

Then, tell the Java Web Start software which files are needed to run the application:

Finally, you need to tell the Java Web Start software your main class to start the application:

Now, you are ready to upload all the files to your Web server.

First, you need to configure your Web server to recognize JNLP files by adding the following MIME type to the Web server's configuration files:

You can let the user point directly to the absolute path of the JNLP file or you can use a launch HTML file. The latter is more user-friendly. You can create a launch page that's as simple as the following:

Save this HTML file as index.html and put it with the JNLP file tc.jnlp under the directory javaui/tc. Upload the whole javaui directory to your Web server.

Now you can visit the launch page at www.asprise.com/javaui/tc/index.html. Click the link to launch the JNLP file. The Java Web Start software downloads and parses the JNLP file for information and resources about the application. After all the information is obtained, it starts to download required files, as shown in Figure 3-7. 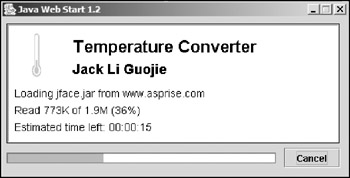 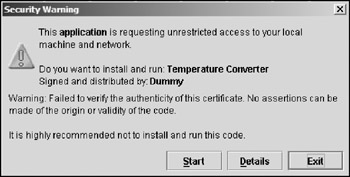 The Windows application runs properly, as shown in Figure 3-8. Figure 3-9 shows the application deployed on Linux.

This chapter helped you to jump start programming with SWT/JFace. First, you need to download and install the SWT/JFace library. After obtaining the library, you need to configure your favorite Java IDE (Eclipse, JBuilder, and so on) to add SWT/JFace library jars into Java path. Then you can start coding your SWT/JFace-based programs. Creating SWT-based programs is very straightforward; you can use a Display object to open a window (represented by the Shell class). Alternatively, you can develop JFacebased programs. Because JFace handles many common UI tasks, the code length is likely to be reduced. After you write and test your programs, you are ready to deploy them. The Java Web Start technology is becoming more and more popular. The last part of this chapter guides you to deploy your programs to multiple platforms using Java Web Start.

An event loop always exists in an SWT program. The next chapter demystifies the event loop and explains SWT event handling mechanisms.