An applet is not a small piece of fruit. Rather, it's a Java application that's designed to run in a browser window on an Internet user's computer. When an Internet user visits a Web page that contains an applet, the Java applet class is downloaded to the user's computer and run there. The applet takes over a portion of the page and, within that space, can do anything it wants.

Applets are, at least in most cases, Swing applications. As a result, everything that's covered in Book VI applies to applets. In this chapter, you create applets that include Swing components. Then you add an applet to a Web page so anyone who views the page can use it.

An applet is similar to a Swing application, with several crucial differences:

Would that it were so. Unfortunately, the company that makes the world's most popular Web browser, whose name I won't mention but whose initials are MICROSOFT, hasn't always played nice with Sun. Or maybe Sun hasn't always played nice with Microsoft. Who knows. Either way, the result has been a mess when it comes to whether or not users' computers can run applets, and if they can, what version of Java they support. Users can download the Java plug-in from Sun, but many users either don't want to take the time, don't understand the process, or don't trust it. (The main Java plug-in download site is http://www.java.com.)

As a result, applets aren't the best way to create Web-based applications that you expect to be used by the masses. The biggest sites on the Internet, such as eBay and Amazon, are not implemented with applets; instead, they're built using tools such as servlets and Java Server Pages as described in the other chapters of Book VII.

Looking at a Sample Applet

To see how a complete applet works, Listing 1-1 shows the complete code for an applet that lets the user order a pizza in one of three sizes (Small, Medium, and Large) with one of three toppings (Pepperoni, Mushrooms, and Anchovies). Figure 1-1 shows this applet in action on a Web page. 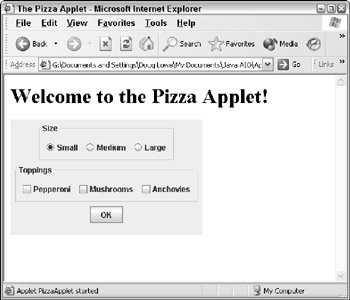 Figure 1-1: The pizza applet in action.

This is an applet version of a Swing program that is in Book VI, Chapter 3. For the details on how the Swing components work, you can refer to that chapter. Here I just want to point out a few details that are specific to applets:

Creating an HTML Page for an Applet

To run an applet, you must create an HTML page that includes an APPLET tag that specifies the name of the applet and the size of the region you want to let the applet run inside. The APPLET tag also includes text that's displayed if the Web browser isn't capable of running the applet.

The basic form of the APPLET tag is this:

For example, here's the HTML file that I used to display the page shown in Figure 1-1:

Welcome to the Pizza Applet! 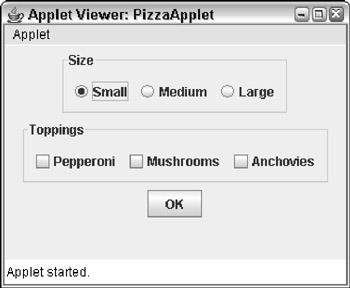 Figure 1-2: The pizza applet displayed in the applet viewer.

If you're using TextPad, you can invoke the viewer by pressing Ctrl+3 after you compile the applet. From a command prompt, you must first create an HTML file as described in the previous section. Then navigate to the directory that contains the HTML file and type this command:

For example, to display the pizza applet with an HTML file named PizzaApplet.html, use this command: