Controlling the layout of components on a frame is one of the most difficult aspects of working with Swing. In fact, it can be downright exasperating. Sometimes the components almost seem to have minds of their own. They get stubborn and refuse to budge. They line up on top of each other when you want them to be side by side. You make a slight change to a label or text field, and the whole frame seems to rearrange itself. At times you'll want to put your fist through the monitor.

The problem isn't with the components-it's with the layout managers that are responsible for determining where each component appears in its frame or panel. In this chapter, you find out how to work with Swing's layout managers. This chapter takes the mystery out of Swing layout so you have complete control over where components are placed.

Understanding layout managers is the key to creating Swing frames that are attractive and usable. Swing provides several different layout managers for you to work with (six are described in the following list):

Figure 5-1 shows frames arranged with each of these layout managers. 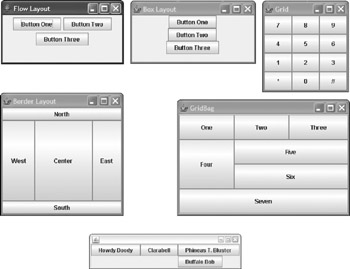 In addition to these six layout managers, Java provides a few additional ones. The Card layout manager lets you create tabbed layouts, but this manager has been largely replaced by other components that do the same thing more effectively. And the Spring layout manager uses a weird concept called springs to let you position components. This layout manager isn't intended to be hand-coded. Instead, it's designed to be used by code generators that create GUI code for you. Neither of these layout managers are covered in this book.

To set the layout manager for a panel or frame, you use the setLayout method. For example, here's how you create a panel and set GridBag as its layout manager:

Because Flow layout is the default layout manager for panels, you're already familiar with how it works. The components are laid out in a single row if possible. If a component doesn't fit on the current row, a new row is started.

By itself, the Flow layout manager isn't very useful. You'll probably use it mostly for small panels that consist of a few components, such as a row of buttons that is then added to a larger panel that uses one of the other layout managers.

Table 5-1 lists the constructors of the FlowLayout class, which you can use to create a new Flow layout manager.

By default, the rows are centered. You can specify left alignment for a panel like this:

To specify right alignment, use this statement instead:

You can also specify gaps that are inserted between each component. Here's an example: 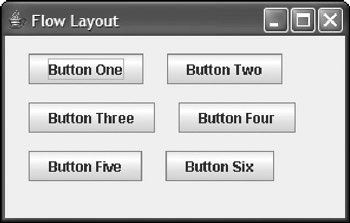 The Border layout manager carves up a frame or panel into five regions: North, South, East, West, and Center, as shown in Figure 5-3. Then, when you add a component to the frame or panel, you can specify which of these regions the component goes in. 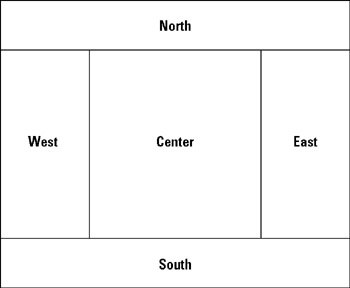 Border layout is the default for frames. To create a panel with Border layout, use one of the constructors of the BorderLayout class that's shown in Table 5-2. For example:

When you add a component to a panel or frame that uses the Border layout manager, you can specify the region to place the component in by using one of the BorderLayout fields, as in this example:

Here the label is added to the North region.

Although you can apply the Box layout directly to a panel, it's much more common to use the Box class, which is similar to a panel but defaults to Box layout rather than Flow layout. In addition, the Box class has several static methods that are useful for laying out components in the box. Table 5-3 lists some methods of this class.

Table 5-3: The Box and Dimension Classes

Here's an example that creates a horizontal box and adds three buttons to it:

The real power of Box layouts is the use of struts, rigid area, and glue:

Now, if you add this Box layout to the South region of a frame, the buttons appear as shown in Figure 5-4. 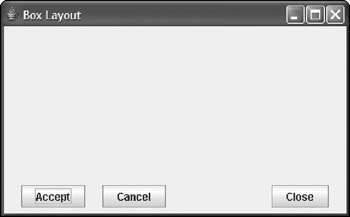 The Grid layout is designed for panels that need to have a set number of components all equally sized and arranged into a grid. You probably won't use it much, but if you need to create something that looks like a calculator or a phone, this is the layout manager you need. Table 5-4 lists the constructors of the GridLayout class, which you use to create a grid layout.

To create a panel with Grid layout, you call the GridLayout constructor to specify the size of the grid. One of the parameters can be zero to allow the grid to expand to however many rows or columns are necessary to hold all the components you add to the panel.

For example, here's code that creates the Grid layout panel that resembles a phone and was shown earlier in Figure 5-1:

As you add components to a panel with Grid layout, the components are dropped into the grid's cells row by row, working across each row from left to right. As each row is filled, a new row is started.

The GridBag layout manager is the layout manager you'll probably use most to lay out complicated panels. Like the Grid layout manager, GridBag lets you carve up a panel into a grid. However, the grid has the following special features:

The following sections describe the ins and outs of working with GridBag layouts.

Sketching out a plan

The first step when preparing to create a GridBag panel is to draw a sketch of how you want the components on the panel to appear. Then slice the panel into rows and columns and number the rows and columns starting with zero in the top-left corner. Figure 5-5 shows such a sketch, prepared with my own hand. 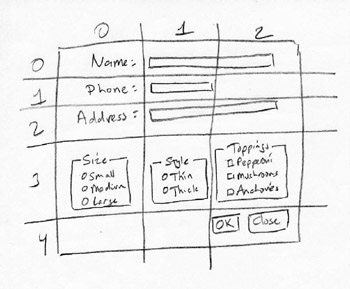 Figure 5-5: Sketching out a panel.

After you have the panel sketched out, make a list of the components, their x and y coordinates on the grid, their alignment, and whether the component spans more than one row or column. Here's an example:

After you lay out the grid, you can write the code to add each component to its proper place.

Adding components to a GridBag

Before you can add components to a panel using the GridBag layout, you must first specify GridBag as the panel's layout manager. You do that by calling the setLayout method, passing a new GridBagLayout object as a parameter:

A few of these fields need some extra explanation:

Then you can call the add method to add the name text field to the panel:

Then you simply change the fields that need to be changed for each component. For example, here's code that adds all three text fields using a single constraint object:

Here the first group of statements creates a GridBagConstraints object named gc and sets its values to the defaults that I want to apply to most of the components in the panel. Then the second group of statements sets the gridy and gridwidth fields before adding each text field to the panel.

The second option is to create a helper method that you can call, passing just the values that vary for each component. For example, here's a method named addItem that adds a component and left aligns it within the specified cells:

Then you can call this method to add a component to the panel. You must pass the panel and the component, its x and y position, and its width and height. For example, here's how you add the name text field:

Listing 5-1 shows the code for a program that displays the frame that I drew in Figure 5-5, and Figure 5-6 shows how this frame appears when the program is run. As you can see, the final appearance of this frame is pretty close to the way I sketched it out. I could probably fix a few minor variations with a little tweaking. 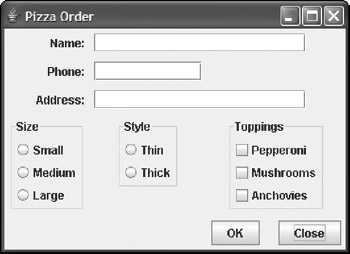 Note that this application doesn't include any event listeners, so the buttons don't do anything other than demonstrate how to use the GridBag layout. The following paragraphs point out the highlights:

The thing to remember about the Group layout is that the layout describes an arrangement of components from two directions-from left to right, and from top to bottom. Imagine an ant crawling along a page. The page contains the five buttons shown in Figure 5-7. As the ant crawls from left to right, the ant sees three things: 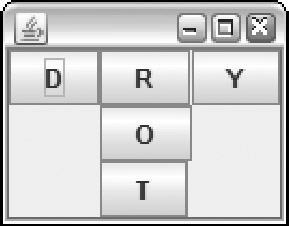 Figure 5-7: An arrangement of buttons with the Group layout.

The ant encounters a parallel group within a sequential group. The code to describe the groups looks like this:

The code's indentation is highly irregular. I indent this way to help you see the group-within-group outline. Maybe the strange indentation helps; maybe it doesn't. You can indent the code any way you want. One way or another, the code describes a parallel group (the middle column of buttons) within a sequential group (the D button, the middle column, and the Y button).

To fully describe a Group layout, you need a second ant. This additional ant crawls from the top of Figure 5-7 downward. As the ant crawls downward, it sees the following things:

This downward-moving ant encounters a parallel group within a sequential group. The code to describe the groups looks like this:

When you put it all together, you get the code in Listing 5-2.

Listing 5-2: A Frame with a Group Layout

Database Modeling with MicrosoftВ® Visio for Enterprise Architects (The Morgan Kaufmann Series in Data Management Systems)
A Practitioners Guide to Software Test Design
An Introduction to Design Patterns in C++ with Qt 4
Microsoft WSH and VBScript Programming for the Absolute Beginner
Java Concurrency in Practice
Python Programming for the Absolute Beginner, 3rd Edition
Digital Character Animation 3 (No. 3)
Flylib.com © 2008-2020.
If you may any questions please contact us: flylib@qtcs.net
Privacy policy
This website uses cookies. Click here to find out more.
Accept cookies