So far in this book, all the programs have been console based, like something right out of the 1980s. Console-based Java programs have their place, especially when you're first learning about Java. But eventually, you'll want to create programs that work with a Graphical User Interface, also known as a GUI.

This chapter gets you started in that direction. You create simple GUI applications that display simple buttons and text labels. Along the way, you find out about two key classes: JFrame and JPanel, which provide the visual containers that hold buttons, labels, and other components I discuss in later chapters.

Some Important Swing Concepts You Need to Know

Learning Swing is one of the most complicated tasks of learning Java. Complicated enough, in fact, that I have to go over some conceptual information before I get into the nitty-gritty of writing GUI code. So put on your thinking cap for the next few sections.

Understanding what Swing does

Swing is a package that lets you create applications that use a flashy Graphical User Interface (or GUI) instead of a dull console interface. Figure 1-1 shows a typical window created with Swing. As you can see, this window includes a variety of user-interface components, including labels, text fields, drop-down lists, and buttons. 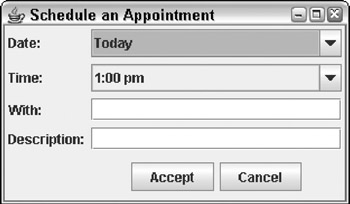 The Swing API provides many different classes for creating various types of user-interface elements. In this chapter, I look at three of those classes: JFrame, JPanel, and JLabel. However, these three classes are part of a larger collection of classes that are all related through inheritance, as shown in Figure 1-2. The Swing family tree splits at the Component class into one group of classes that are derived from the JComponent class, and another branch that descends from the Window class. 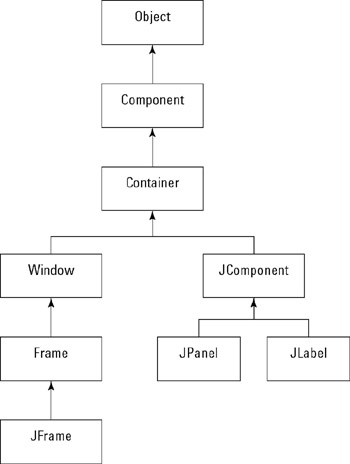 The following paragraphs briefly describe each of the classes shown in this figure:

In addition, you'll find that some Swing features use classes in the java.awt and java.awt.event packages. So you may need to import those packages as well.

I ve Been Framed!

The top-level component for most Swing-based applications is called a frame and is defined by the JFrame class. By itself, a frame doesn't do much. But to do anything else in Swing, you must first create a frame. Figure 1-3 shows a frame that does nothing but display the message Hello, World! in its title bar.

Figure 1-3: The frame displayed by the Hello, World! program.

The JFrame has about a bazillion methods, but only a few of them are useful in most programs. Table 1-1 lists the JFrame methods you use most, along with a couple of constructors.

At the minimum, you want to set a title for a new frame, set the frame's size so it's large enough to see any components you add to it (by default, the frame is zero pixels wide and zero pixels high, so it isn't very useful), and call the setVisible method to make the frame visible. One way to do these three things is to create an instance of the JFrame class and set its properties using statements like this:

A more common approach, however, is to create a frame by declaring a class that extends the JFrame class. Then you call these methods in the constructor, as I describe in the next section.

To get you started with Swing, Listing 1-1 shows a Swing version of the classic Hello, World! program, using nothing but a frame. If you run this program, the frame shown in Figure 1-1 is displayed on-screen. As you can see, the frame's title bar contains the text “Hello, World!”

The purpose of this seemingly pointless little program is to illustrate one solution to the first problem you encounter when you work with Swing: The main method is a static method, but Swing frames are objects-so you have to figure out how to get your program out of a static context. This program does that by creating the application as a class that extends JFrame. Then, the main method calls the class constructor, in effect creating an instance of itself. That's all the main method does; the real work of this application is done by the constructor.

Listing 1-1: The Swing Version of the Hello, World! Program

The following paragraphs describe most of the features of this program:

That's all there is to this program. Granted, it's a little more complicated than the console-based Hello, World! program from Book I, Chapter 1. But not by much. Just to be sure its operation is clear, here's a recap of what happens when this program is run:

Positioning the Frame On Screen

The JFrame class provides two methods that let you specify the position of the frame on-screen. If you want to place the frame at some arbitrary location on-screen, use the setLocation method. For example, to put the frame at the top-left corner of the screen, use this statement:

This method is designed to let you position a frame relative to some other component that's already displayed. But if you pass null as the parameter, the method centers the frame on-screen.

If you want to position a window at some location other than the top-left corner or dead center on-screen, you may need to know the width and height of the user's screen so you can calculate a location for your frame. To determine the size of the user's screen, you can use a class named Toolkit. The Toolkit class has a bunch of methods, but you need to know two of them here:

The Dimension class has two public fields that represent the size of the screen: height and width. Both fields are of type int.

Suppose you want to position a frame so that its bottom-left corner is right at the center of the screen. The following code, placed in the frame's constructor, does the trick:

A panel is a type of container that's designed to hold a group of components so they can be displayed on a frame. The normal way to display a group of controls such as text fields, labels, buttons, and other GUI widgets is to add those controls to a panel, and then add the panel to the frame. You can bypass the panel and add the controls directly to the frame if you want, but using a separate panel to hold the frame's control is almost always a good idea.

You can use several different techniques to create a panel and add it to a frame. One is to simply create a JPanel object and assign it to a variable in the JFrame constructor. You can then add components to the panel, and then add the panel to the frame. For example

Another commonly used technique is to create a separate class for the panel. This class should extend JPanel. Then you can add any components the panel needs in the constructor:

Then, in the frame class constructor, you create a new instance of the panel class and add it to the panel:

Or, just this statement does the trick:

Now that you know how to create frames and panels, you can create a useful component to add to a panel: a label. A label is a component that simply displays text. Labels are used for a variety of purposes: to display captions for other controls such as text fields or combo boxes, to display informational messages, or to show the results of a calculation or a database lookup.

To create a label, you use the JLabel class. Table 1-3 shows its most commonly used constructors and methods.

When you create a label, you can pass the text you want it to display to the constructor, like this:

Or, you can create the label first, and then set its text later:

A label won't be displayed until you add it to a panel that is (in turn) added to a frame. Here's an example of a constructor for a frame class that creates a panel, creates a label, adds the label to the panel, and adds the panel to the frame:

Figure 1-4 shows what this frame looks like when the program is run.

Next to labels, the Swing component you use most is the JButton component, which creates a button the user can click. Figure 1-5 shows a frame with a single button.

Figure 1-5: A frame with a panel, which includes a button.

In the next chapter, you find out how to write the code that responds when the user clicks a button. Here I just focus on how to create buttons and control their appearance. Table 1-4 lists the most commonly used constructors and methods that are available for the JButton class.

If you don't provide the button text when you call the constructor, you can supply it later via the setText method, like this:

A Word about the Layout of Components

Controlling the layout of components on a panel is one of the hardest things about using Swing. Hard enough, in fact, that I devote Book VI, Chapter 5 to it. Until then, you need to know a few key points: