In this chapter, you discover how to use Java's sockets interface, which lets you set up input and output streams between programs on client and server computers. In fact, I show you how to create a simple server program that can be accessed over the Internet.

Along the way, you find out about the TCP/IP networking protocol, IP addresses and ports, and other useful networking topics.

I could go on and on.

An IP address is a number that uniquely identifies every computer on an IP network. IP addresses are 32-bit binary numbers, which means that, theoretically, a maximum of something in the neighborhood of 4 billion unique host addresses can exist throughout the Internet.

You usually see IP addresses represented in this format.

Besides an IP address, you must also use a port to access data from a computer over the Internet. The various services that a server computer might provide are assigned well-known port numbers. For example, the port number for the Web protocol HTTP is 80. As a result, a computer that wants to access a Web server HTTP must do so over port 80.

The Internet has an entire network of DNS server computers throughout the world that look up host names and provide the corresponding IP address. For example, when you enter http://www.dummies.com into the address bar of a Web browser, your browser consults a DNS server to find out the IP address for http://www.dummies.com. Then it displays the home page for that address.

Closely related to DNS is URL, which stands for Uniform Resource Locator. URL is a naming scheme that can uniquely identify any resource on the Internet. By resource, I usually mean file. Thus, URL turns the DNS naming system into a huge file system that lets you access any file that's available anywhere on the Internet. It does this by appending filepath information to the end of a host name, like this:

This URL refers to a file named myfile.txt in a directory named pub on a computer identified by the host name http://www.ftp.someserver.com. I won't deal with URLs in this chapter, but they play a big role in Web programming. So be prepared to revisit them in Book VII.

Telnet is a handy debugging tool that can let you check out network programs interactively. It comes free with just about every operating system, though it may or may not be installed automatically. So if you don't have it, you may have to retrieve it from your operating system disks.

Using telnet is easy. From a command prompt, just type telnet followed by the name of the host (or its IP address) and the port number you want to connect to. Here's an example:

This command connects to port 80 of http://www.somecomputer.com.

To connect to a network server program running on the same computer you're running telnet on, just use localhost as the host name. For example, here's a command that connects to a server program using port 1234:

After telnet fires up, anything you type is sent to the port, and anything received from the port is displayed in the telnet window.

Getting Information about Internet Hosts

One of the most useful Java API classes for network programming is the InetAddress class. In the following sections, you discover what this class does and how to use it in a simple program that displays the IP address used for any domain name.

As you know, an IP address is simply a number that corresponds to a particular host computer on the Internet. The designers of Java could have simply represented IP addresses as long numbers. But instead, they created a powerful class called InetAddress that represents an IP address.

The InetAddress includes a number of useful methods that let you create InetAddress objects from strings that represent IP addresses or host names or perform useful lookups to find out the IP address for a given host name or vice versa. Table 2-1 lists the most commonly used methods.

Here are a few additional points about this class:

A program that looks up host names

As you can see, this program prompts the user for a host name. It then looks up the IP address or addresses for the host name, displays the results, and asks the user if he or she wants to look up another host.

The following paragraphs describe the key lines in this program:

One popular form of network programming is creating client and server programs that work together to perform specific tasks. These programs communicate with each other by sending information over the network. The format of this information is governed by a protocol, which is merely an agreement on the types of messages the clients and servers can send and receive.

A few hundred well-established protocols already exist for such things as sending e-mail and Web pages, looking up DNS names, sharing files, and so on. However, for specialized networking applications, you may find yourself developing your own protocol to coordinate your clients and servers.

Each protocol usually has a unique port assigned to it. For example, port 80 is reserved for the HTTP protocol used to exchange Web pages, and port 25 is used for the SMTP protocol used to exchange e-mail messages. If you end up creating your own protocol, you need to pick a port that doesn't conflict with any of the known ports or with any ports that the users of your application may already be using for other purposes.

Client and server computers establish a connection on a port by means of a special object called a socket. In the following sections, I talk about two Java classes that are designed to work with sockets. Then you see an example of a simple server program and a client that's designed to work with the server.

In this section, I look at two classes that are designed for communicating through sockets. The first, Socket, represents a basic socket object. The second, ServerSocket, is used to help servers establish socket connections with clients.

The Socket class represents a socket connection between two programs. Although the programs can be running on the same computer, they don't have to be. In fact, any two computers that are connected to the Internet can communicate with each other via a socket. Table 2-2 lists the most commonly used constructors and methods of this class.

Table 2-2: Constructors and Methods of the Socket Class

Here are a few important details about the Socket class:

A server socket is a socket that lets clients connect with your application. When a client connects, the server socket creates a Socket object, which the application can then use to communicate with the client. Table 2-3 lists the most commonly used constructors and methods of this class.

Table 2-3: Constructors and Methods of the ServerSocket Class

Here are some important points to remember about the ServerSocket class:

In this section, I create a simple network-server program that provides clients with a randomly selected quote from a well-known television program called the Shrimpsons. It seems that a certain young boy on this program, whose name shall remain unknown, frequently has to write sentences on the blackboard as punishment. The sentences that he has been known to write have some minor amusement value.

I call the server the BartServer, and the protocol used to communicate with the BartServer BART, short for Blackboard Assignment Retrieval Transaction, because it allows you to randomly retrieve blackboard assignments. The protocol itself is simple:

The BartServer communicates over port 1234. After you get the BartServer up and running on your computer, you can test it out by running the telnet command from a command prompt. Type the command telnet localhost 1234, and you're greeted with a message indicating that you have successfully connected. Here's a typical telnet session with the BartServer:

Before you roll up your sleeves and look at the network programming required to implement the BartServer, take a look first at the supporting class, named BartQuote. This class has a single method named getQuote that returns one of 20 randomly selected blackboard sentences. The code for this class is shown in Listing 2-2.

Note that the sentences are hard-coded into this program. That's not the way you'd do it if you really wanted to use the BartServer. Instead, you'd put the sentences in a file and read the file each time you start up the server. (I don't cover File I/O until Book VIII, though, and I don't want to introduce any code here you couldn't follow, because the network programming in the rest of this chapter is complicated enough. Don't have a cow, man.)

Here are the key points of this class:

The BartServer program is the program you run on a server computer to provide randomly selected blackboard sentences for clients that want them. This program is shown in Listing 2-3.

The following paragraphs walk you through the key parts of this program:

You may have noticed that the BartServer program displays various status messages in its console window as it runs. For example, when a client connects, it displays a message showing the IP address of the client. And when a client requests a quote, a message is displayed on the console. Here's a typical console screen for BartServer where a client connected, requested three quotes, and then disconnected:

The preceding section shows you how to connect to the BartServer program with telnet to interact with the server. Now, this section presents a client program that communicates with a BartServer server. This program starts by asking the user for a host name. Then it connects to BartServer at that host, requests a quote, and displays that result on the computer's console 20 times (as if the console were a blackboard).

Figure 2-1 shows a typical execution of this program. Here I entered localhost as the BartServer host. localhost is useful for testing clients and servers together on the same computer system. The Java code for this program is shown in Listing 2-4.

Here's an explanation of the more confusing aspects of this program:

The BartServer program presented in the previous section works fine, but it has one major deficiency: It handles connections for only one client. To make matters worse, it quits when that client disconnects. That's not much of a server. 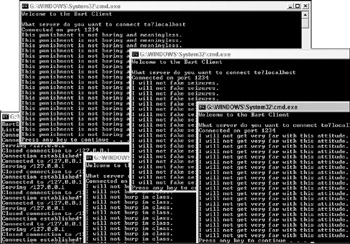 Most of this code is the same as the code in version 1.0, so I just highlight the key changes: