Because of its powerful drawing capabilities, Java lends itself especially well to creating game programs-especially games that are created as applets so they can be played over the Internet. Game programming is a huge subject, big enough for a whole shelf of books. In this chapter, I just scratch the surface of creating basic animations and playing simple games. Specifically, you find out how to get a ball bouncing in an applet, how to create a paddle to hit the ball, and how to find out when you missed.

In other words, welcome to the 1970s! You're going to create an applet that plays Pong!

In some cases, the sprite may have a series of images associated with it. For example, if the sprite is a little person who walks around in your game world, you might have several images representing him walking left and right, or in various stages of his little stride. Then you can put these images in an array and use an index variable to keep track of which image to draw.

No matter what the sprite looks like, the basic technique for animating the sprite in Java is the same: Create a thread that periodically repaints the drawing component, and then calculate a new position for the sprite each time the component is repainted and draw the sprite in its new position.

For example, suppose you want to create a ball that travels across a component, starting at the left side of the component and traveling across to the right side. To do that, you have to do the following things:

Sound simple enough? Listing 4-1 shows the first of several versions of an applet program that animates a moving ball. Figure 4-1 shows this applet in action when run in the applet viewer. 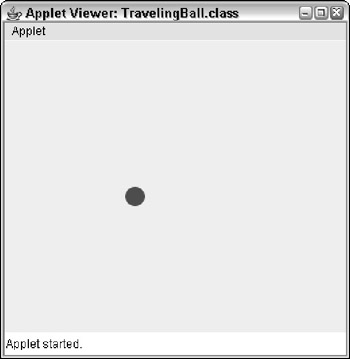 Figure 4-1: The BallRoom applet in action.

The following paragraphs describe the key portions of this program:

What about Double Buffering?

If you've looked into animation and game programming before, you may have heard of a technique called double buffering that's required to produce smooth, flicker-free animation. When you use double buffering, you don't draw shapes directly to the component. Instead, you create an off-screen image object called a buffer and draw the shapes to it. Then when all the shapes are drawn, you transfer the entire buffer image to the component.

If for some reason you want to turn double buffering off-maybe just to see how much it improves the animation for your application-you can do so by calling the setDoubleBuffered method of the component you're drawing to, like this:

The program shown in Listing 4-1 illustrates the basic framework for a program that animates sprites. However, the ball it animates isn't very interesting: It just flies across the screen in a straight line and disappears off the right edge, never to be seen again. To be more interesting, the ball should travel in different directions and bounce off the edges of the component so it stays visible.

The trick of animating the ball so it travels in other than horizontal (or v ertical) lines and bounces off the walls is calculating the ball's new (x, y) position for each animation cycle. This problem has at least two basic approaches:

To add a capability for the ball to bounce, you need to add some instance variables and modify the paint method a bit. The resulting PaintSurface class is shown in Listing 4-2.

Listing 4-2: A Bouncing Version of the PaintSurface Class

The following paragraphs describe the key elements of this class:

Bouncing a Bunch of Balls

Most games require that you animate more than one sprite. For example, more than one ball may be on-screen at one time, or there might be other sprites besides balls. Thus the paint method needs to have the ability to move and draw multiple sprites.

One way to do that is to create a class for the sprites to be animated, and then add instances of that class to an array list or other collection. Then the paint method can use a loop to move and draw each sprite in the collection.

To add the ability to animate more than one ball, start by adding a class that represents a single ball, as shown in Listing 4-3.

The following paragraphs point out the highlights of this program:

With the Ball class in hand, Listing 4-4 shows a version of the PaintComponent class that creates an array list with ten randomly placed balls, and then draws each one in the paint method.

This class starts by declaring an instance variable named balls that holds the balls to be animated. Then, in the constructor, it uses a for loop to create ten balls and add them to the collection. And in the paint method, which is called once every 20 milliseconds, a for loop is used to call each ball's move method, and then pass the ball to the fill method to paint it on the component.

Figure 4-2 shows this program in action, with ten balls bouncing around randomly on-screen. If you feel daring, try changing the for statement in the PaintComponent constructor so it creates 100 balls instead of 10. The little applet window gets pretty crowded! 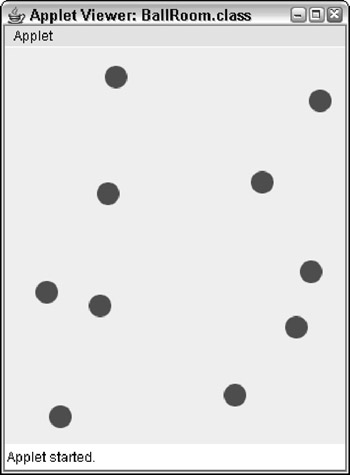 The balls created by the Ball class shown previously have one slightly unrealistic behavior: They're transparent to each other. If two balls happen to arrive at the same place at the same time, they simply pass right through each other without noticing.

If you want to create balls that bounce off each other as well as off the walls, all you have to do is make a modification to the move method of the Ball class. Just get a reference to the collection that contains all the other balls and check each ball to see if the current ball has hit any of the other balls.

If so, adjust the trajectory of each ball accordingly.

Listing 4-5 shows a version of the Ball class in which the balls bounce off each other.

The following lines describe the high points of this version of the Ball class:

The key to turning an animation program into a game program is adding user interaction via the mouse or keyboard. Either way, the technique is the same: You add event listeners to handle keyboard or mouse events. Then, in the event listeners, you make appropriate changes to the game's sprites according to the user's actions.

For example, suppose you want to create a paddle that the user can move back and forth by dragging the mouse. To do that, just add a listener for mouse motion and save the mouse pointer's x position in an instance variable that represents the top-left corner of the paddle. Here's code to do this, written as an anonymous inner class:

Place this code in the constructor for the component the animation is drawn on. Notice that I subtracted 30 from the x position. That's because the width of the paddle is 60, and you want the mouse position to be the center of the paddle, not the left edge.

Having stored the mouse position in an instance variable, you can use it to draw the paddle in the paint method. Here's an example:

Here the paddle is drawn as a 60 × 8 black rectangle. When the user moves the mouse over the applet, the paddle moves along with the mouse.

To show how you can incorporate this technique into a program that plays a simple game, Listing 4-6 shows the complete code for a simple, Pong-like game, where a ball bounces around and the user tries to hit it with the paddle. Each time the user hits the ball, he or she gets points based on how fast the ball is moving at the time. If the user misses the ball, 1,000 points are deducted, and the ball is replaced by a new ball with a random speed and trajectory.

To add a small amount of interest to this admittedly boring game, the player can put English on the ball by moving the mouse pointer quickly at the moment it hits the ball. When the program detects this movement, the ball changes color and its x velocity is increased by 50 percent. Thus, the ball bounces off the paddle at a skewed angle and increases its speed. The player scores more points with each hit, but of course the ball is harder to hit when it's traveling faster.

Figure 4-3 shows this program in action. As you can see, I'm getting pretty good at it. 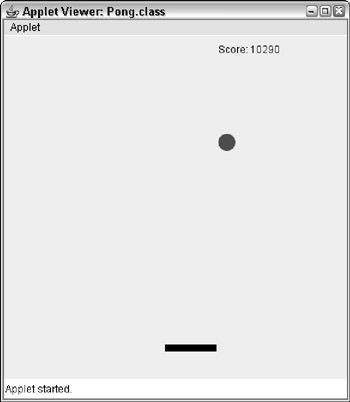 Figure 4-3: The NotPong game in action.

The following paragraphs explain the gory details of how this program works: