Java development environments have two basic approaches. On the one hand, you can use a sophisticated Integrated Development Environment (IDE) such as Sun's Java Studio Creator, IntelliJ IDEA, or Eclipse. These tools combine a full-featured source editor that lets you edit your Java program files with integrated development tools, including visual development tools that let you create applications by dragging and dropping visual components onto a design surface.

At the other extreme, you can use just the basic command-line tools that are available free from Sun's Java Web site (http://www.java.sun.com). Then you can use any text editor you wish to create the text files that contain your Java programs (called source files), and compile and run your programs by typing commands at a command prompt.

When you get to the Java download page, you find links to download the JDK or the JRE. Follow the JDK link; the JRE link gets you only the Java Runtime Environment, not the complete Java Development Kit.

After you download the JDK file, you can install it by running the executable file you downloaded. The procedure varies slightly depending on your operating system, but basically you just run the JDK installation program file after you download it:

Before you can download the JDK, you have to approve of the Java license agreement, all 2,463 words of it including the thereupons, whereases, and hithertos all finely crafted by Sun's legal department. I'm not a lawyer (and I don't play one on TV), but I'll try to summarize the license agreement for you:

Table 2-1 lists the subfolders created in the JDK root folder. As you work with Java, you'll frequently refer to these folders.

In addition to these folders, the JDK installs several files into the JDK root folder. I list these files in Table 2-2.

After you install the JDK, you need to configure your operating system so that it can find the JDK command-line tools. To do that, you must set the Path environment variable. This variable is a list of folders that the operating system uses to locate executable programs. To do this on a Windows XP or Windows Vista system, follow these steps:

For earlier versions of Windows (such as ancient Windows 98 or Me), you set the path by adding a Path statement to the AutoExec.bat file in the root directory of your C drive. Here's an example:

Java comes with several command-line tools you can run directly from a command prompt. The two most important are javac, the Java compiler used to compile a program, and java, the runtime command used to run a Java program. These tools work essentially the same no matter what operating system you're using. (The examples in this section are all for Windows XP and Windows Vista.)

You can compile a program from a command prompt by using the javac command. Before you can do that, however, you need a program to compile. Using any text editor, type the following text into a file and save it as HelloApp.java:

Save the file in any directory you wish. Pay special attention to capitalization. For example, if you type Public instead of public, the program won't work. (If you don't want to bother with the typing, you can download the sample programs from this book's Web site.)

Open a command prompt and use a cd command to change to the directory you saved the program file in. Then enter the command javac HelloApp. java. This command compiles the program (javac) and creates a class file named HelloApp.class.

Assuming you typed the program exactly right, the javac command doesn't display any messages at all. If the program contains any errors, one or more error messages appear on-screen. For example, if you type Public instead of public, the compiler displays the following error message:

The compiler error message indicates that an error is in line 1 of the HelloApp.java file. If the compiler reports an error message like this one, that means your program contains a coding mistake. You need to find the mistake, correct it, and then compile the program again.

Compiling more than one file

Normally the javac command compiles only the file that you specify on the command line. However, you can coax javac into compiling more than one file at a time by using any of the techniques I describe in the following paragraphs:

The javac command has a gaggle of options you can use to influence the way it compiles your programs. For your reference, I list these options in Table 2-3. To use one or more of these options, type the option either before or after the source filename. For example, either of the following commands compiles the HelloApp.java file with the -verbose and -deprecation options enabled:

Don't get all discombobulated if you don't understand what all these options do. Most of them are useful only in unusual situations. The options you'll use the most are

When you successfully compile a Java program, you can then run the program by typing the java command followed by the name of the class that contains the program's main method. The Java Runtime Environment loads, along with the class you specify, and then runs the main method in that class. For example, to run the HelloApp program, type this command:

The program responds by displaying the message “Hello, World!”.

If Java can't find a filename that corresponds to the class, you get a simple error message that indicates the class can't be found. For example, here's what you get if you type JelloApp instead of HelloApp:

However, if you get the class name right but capitalize it incorrectly, you get a slew of error messages. Ponder this example:

Wow, that's a pretty serious-looking set of error messages-considering that the only problem is that I forgot to capitalize HelloApp. Java isn't just case-sensitive, it's case-hypersensitive.

Like the Java compiler, the Java runtime command lets you specify options that can influence its behavior. Table 2-4 lists the most commonly used options.

The javap command is called the Java disassembler because it takes apart class files and tells you what's inside them. It's not a command you'll use often, but using it to find out how a particular Java statement works is sometimes fun. You can also use it to find out what methods are available for a class if you don't have the source code that was used to create the class.

For example, here's the information you get when you run the javap HelloApp command:

As you can see, the javap command indicates that the HelloApp class was compiled from the HelloApp.java file and that it consists of a HelloApp public class and a main public method.

If you become a big-time Java guru, you can use this type of information to find out exactly how certain Java features work. Until then, you should probably leave the javap command alone, except for those rare occasions when you want to impress your friends with your in-depth knowledge of Java. (Just hope that when you do, they don't ask you what the aload or invokevirtual instruction does.)

I describe three of these additional tools elsewhere in this book:

Before you get too far into learning Java, don't be surprised if you find yourself wondering whether some class has some other method that I don't describe in this book-or whether some other class may be more appropriate for an application you're working on. When that time comes, you'll need to consult the Java help pages.

The APIs & Documentation links on the java.sun.com/javase/reference page take you to the complete documentation for all currently supported versions of the Java API, in English as well as Japanese. Figure 2-2 shows the English Java SE 6 API documentation page. 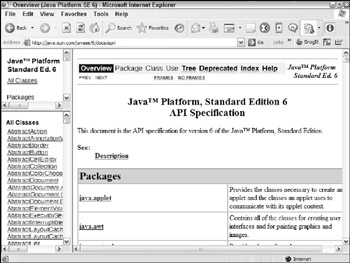 You can use this page to find complete information for any class in the API. By default, all the Java classes are listed in the frame that appears at the bottom left of the page. You can limit this display to just the classes in a particular package by selecting the package from the menu at the upper-left side of the page. (If you don't know what a Java "package" is, don't worry. You find out about packages in Book I, Chapter 4.)

Click the class you're looking for in the class list to call up its documentation page. For example, Figure 2-3 shows the documentation page for the String class. If you scroll down this page, you find complete information about everything you can do with this class, including an in-depth discussion of what the class does, a list of the various methods it provides, and a detailed description of what each method does. In addition, you find links to other similar classes. 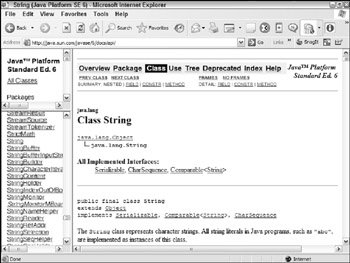 Figure 2-3: The documentation page for the String class.

Frankly, this documentation isn't that much help for beginning programmers. It was written by computer scientists for computer scientists. You can tell just by looking at the table of contents that it isn't for novices. The first chapter is called Introduction (that's not so bad), but then Chapters 2 and 3 are titled "Grammars" and "Lexical Structure." And it just gets more arcane from there.

That's why you're reading this book, after all. You won't even find a single sentence more about Lexical Structure in this book (other than this one, of course). Even so, at some time in your Java journeys you may want to get to the bottom of the rules that govern such strange Java features as anonymous inner classes. When that day arrives, grab a six pack of Jolt Cola, roll up your sleeves, and open the Java Language Specification pages.