Hack 77. Fill in Missing Values in a Pivot Table

Microsoft Excel can generate pivot tables. You can't produce a pivot table using SQL alone, but you can use SQL to help Excel do a better job by supplying missing values.

A pivot table displays counts, sums, or averages arranged in a grid. You can't produce a pivot table automatically in SQL because the column headings, and indeed the number of columns, depend on the data in the table. You can build a table with column headings showing aggregates of different values [Hack #51], but you cannot have the columns generated automatically in SQL.

Creating a pivot table in Excel is not difficult, but it is time consuming. This is especially true if you are concerned with the format of your reports; getting the font sizes and the colors just the way you want them can be labor intensive. However, you can create a pivot table with a link (the data source) to a database table or query. This means that you can refresh the report to reflect the latest data with a single click.

You can use Excel to generate a pivot table from the raw data, as shown in Figure 10-1.

Figure 10-1. Excel pivot table based on incident, showing severity broken down by location

Excel has a PivotTable Wizard that takes you through the process step by step. The wizard, shown in Figure 10-2, includes options to pull the source data from an ODBC source, and that includes pretty much every SQL product available. If you want to use this with MySQL, be sure to get the MySQL ODBC driver from http://dev.mysql.com/downloads/connector/odbc. 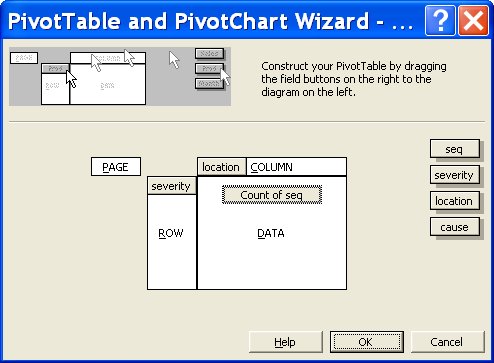 The wizard is intimidating at first, but with a little experimentation you can use it to produce useful business intelligence. The real value to this kind of report comes when the data is updated regularly and you can compare the most recent data with corresponding historical reports. This means that you have to produce the reports regularly; that is much easier if you automate the process.

In Figure 10-1 you might notice that the location East is missing. By chance, no rows in the supplied data set involve a location of East, so Excel does not show the missing column.

Missing columns or rows matter because the tables are particularly useful when you look at two versions side by side. When you compare this month's table with last month's table, the missing rows or columns make it harder to spot the patterns. In addition, the fact that zero events occurred in the East is important, possibly crucial, information.

Let's assume that you have a table, shown in Table 10-2, of all possible locations; this is likely, as the location column ought to reference this list as a foreign key.

You could also specify the FROM clause as FROM location LEFT OUTER JOIN incident ON (location=location.id).

Using a RIGHT OUTER JOIN ensures that the locations that do not have any data still show up in the pivot table.

Now consider the severity values. The output in Figure 10-3 includes Minor, Medium, and Major severity levels. But a severity level of Mega is also a possibility; it happens that no Mega event is in this particular data set. If you want to include Mega in your output, another RIGHT OUTER JOIN will not work.

You now have the Mega severity level included as required. But you have lost the locations East and Central. The first JOIN included the missing locations, with a NULL value in the severity column. The second RIGHT OUTER JOIN strips these rows out because a NULL in the left result set will not make it through the right join.

Here is the FULL OUTER JOIN working with all four tables. Also included is the missing cause. The Process value is a possible cause that happened to not show up in the incident table:

This output is perfect for the pivot table. It means that all possible columns and rows will show up on the reports. The extra rows that you introduce with the FULL OUTER JOINs will not affect the totals because a NULL value in the seq column ensures that they will not contribute to the count.

There is another approach to including the missing rows. This works with SQL Server, Oracle, and PostgreSQL, as well as MySQL and Access.

You can create a UNION that includes the incident table together with each of three tables: location, severity, and cause. For the three extra tables you must pad the result set using NULL values. This means that your output includes additional rows for locations, such as North and South, which showed up in the incident table anyway. The extra rows do not matter because they have a NULL in the seq column and will not contribute to the count. A pivot table based on this data set will include all of the required columns or rows for all three quantities: location, severity, and cause: