You know that Solver can generate several types of reports upon finding a solution to a problem and you'd like to learn more about these.

The version of Solver that ships with Excel can generate three reports: an Answer report, a Sensitivity report, and a Limits report. These reports are described in the following discussion.

Solver's three reports are helpful when interpreting the results obtained by Solver. When it finds a solution, you're presented with a dialog box containing a message regarding the nature of the solution found. You can choose which Solver reports , if any, to generate. (See the introduction to Chapter 9 for more information.) Solver will generate the selected reports in separate worksheets that it will create automatically. Each of the three available report types is explained in the following sections.

Answer reports show the initial and final values of the objective (Target Cell) and all variables (Adjustable Cells). You can quickly see from these reports how close your initial guess was to the optimal solution.

Notice that these reports contain cell references to the objective, variables, and constraints. They also include a name for these cells. These are not cell names as defined using Excel's cell name feature (discussed in Recipe 1.14). Instead, these names are automatically generated by Solver using a specific algorithm. If you set your spreadsheet up with this algorithm in mind, the names are meaningful; otherwise, they could be completely meaningless. 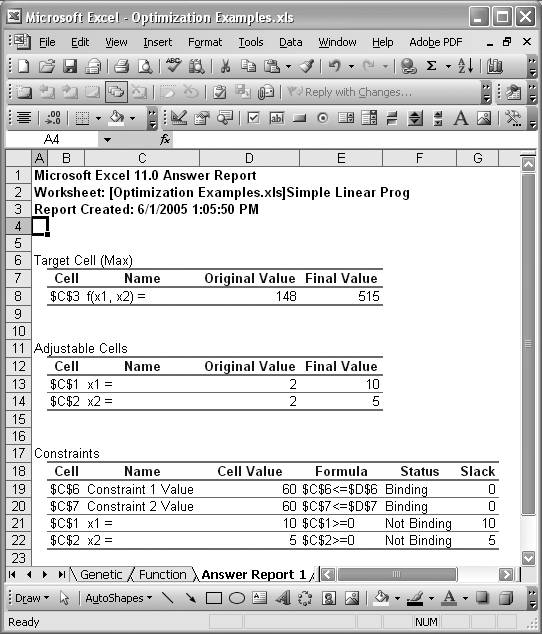 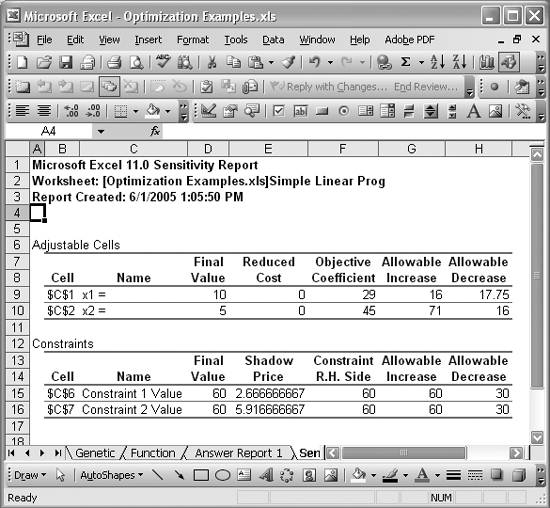 Both tables start with a cell reference column, along with a label and then a final value column. The final values are simply the resulting values of the variables or constraints corresponding to the solution found by Solver. The other columns in these tables give you the sensitivity information.

The Reduced Cost applies to variables whose optimum value turns out to be 0. In this case, reduced cost provides an estimate of how much the objective function will change if you force the variable to assume some nonzero value. Variables whose values turn out to be nonzero for the optimum solution will show a reduced cost of 0. 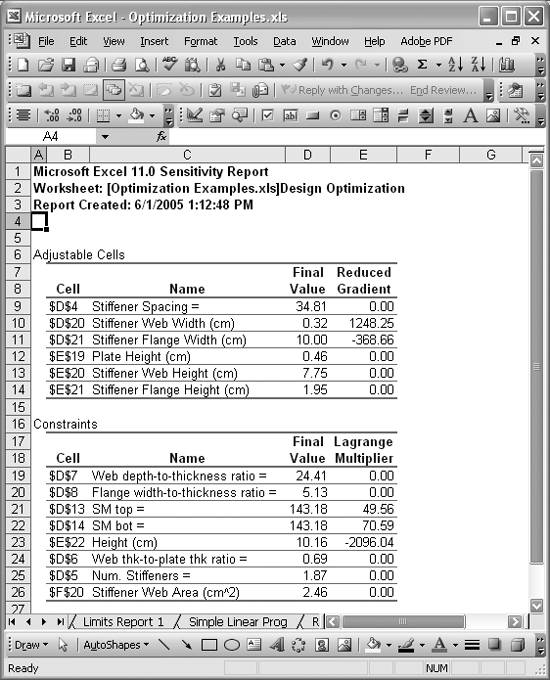 The Objective Coefficient shows the coefficient corresponding to each variable as it appears in the objective function. The Allowable Increase and Allowable Decrease values tell you that so long as these coefficients remain with their current value plus or minus the allowable increase and decrease, respectively, the optimum values for the variables will remain unchanged, although the optimum value for the objective function (target cell) may change.

As in the linear case, there are two tables, corresponding to variables (Adjustable Cells) and constraints. In both cases the cell reference, name, and final optimum values for each variable and constraint are shown.

Limits reports tell you how the value of the objective function changes as each variable is maximized and minimized, while all other values are held constant and while still satisfying the problem's constraints. Figure 13-18 shows a typical Limits report. 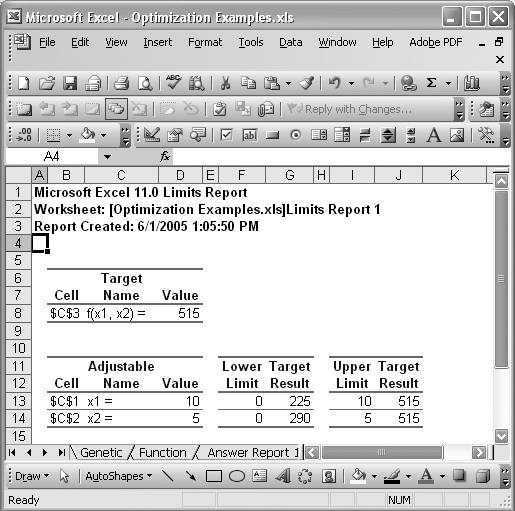 The Target values show you the value of the objective function corresponding to the lower and upper limits of the variables obtained through a maximization and minimization process as described a moment ago.