You want to perform vector-based calculations , like vector cross and dot products, but can't find any vector functions in Excel.

Excel does not provide any built-in functions to perform vector calculations; however, you can add your own custom functions without too much effort.

Since VBA allows you to write custom functions that can then be called directly from your Excel spreadsheet, you can easily add functions to perform vector calculations.

Figure 7-4 shows an example spreadsheet containing two vectors, u and v, whose x-, y-, and z-components are stored in separate cells. 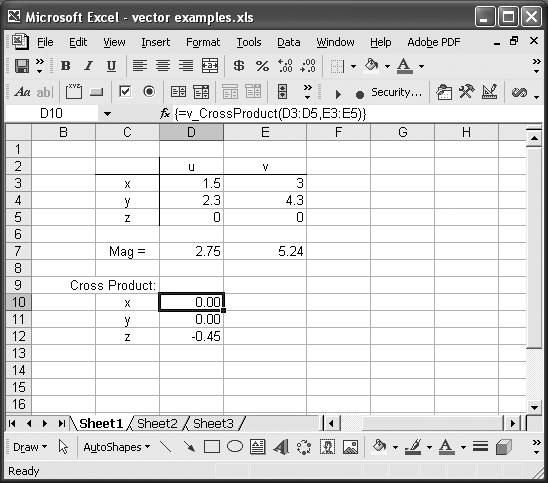 Cells D7 and E7 show the magnitudes of these vectors. These magnitudes are computed using a custom function called v_Mag. The syntax for v_Mag is =v_Mag(cell range), where cell range is a cell reference consisting of three cells containing the vector components, x, y, and z. Example 7-1 shows the VBA code for v_Mag. (See Recipe 2.2 for more information on writing VBA functions.)

The only parameter for this function is a cell range, v, that represents the selected cell range containing the three vector components, x, y, and z. The first three lines of this function declare three local variables in which to store the vector components. You really don't need to use local variables in this example, but I did so to make the remainder of the code more readable.

The next three lines set the values of the local variables to the values contained in the input cell range. Since v is of type Range, you can access its Cells property to retrieve the value for each cell. Each cell in the range is referred to using a 1-based array index as shown.

Finally, the last line of this function computes the magnitude of the vector and returns the result as a Double type scalar value.

Computing the vector cross product is a little more involved than simply computing the magnitude of a vector. For the cross product, we need to return the three components of the resulting vector as an array in Excel. This means we need to write a VBA function that returns an array instead of a scalar. The resulting function will be an array function that must be entered in a spreadsheet using Ctrl-Shift-Enter just like Excel's built-in array functions.

In Figure 7-4, cells D10 through D12 contain an array formula called v_CrossProduct. This is a custom function I created to compute the vector cross product of two vectors passed in as cell ranges. If you take a look at the formula bar in Figure 7-4, you'll see how this function is used; specifically, the formula is {=v_CrossProduct(D3:D5, E3:E5)}, where the braces indicate the function is an array function.

To enter this function, you have to select a range consisting of three contiguous cells, either vertically or horizontally oriented. The function we'll write will detect how the input cells are oriented and will return the results accordingly.

The next block of code stores the components of the input vectors in local variables. Then it computes the cross product with each component of the resulting vector stored in the three elements of the local array ReturnArray, which we declared to store the result.

The final step is to check the DoTranspose flag. If it is true, then ReturnArray must be transposed using the transpose worksheet function. If it is false, you can simply return the ReturnArray without further modification.

The techniques discussed here can be used to construct custom functions to perform all the usual vector operations.