You're analyzing a dataset and would like to create a histogram plot of the data showing its frequency distribution.

Figure 5-4 shows a histogram plot (bar graph) along with a frequency polygon (the thin line) and cumulative frequency plot (the bold line) for a set of data. The dataset for this example plot represents the angular response of a torsional spring.

You can quickly create this sort of chart using the techniques discussed throughout Chapter 4. You'll first have to compute the actual frequency distribution for your dataset, and to that end you have two choices in Excel: the FREQUENCY function or the Histogram tool included in the Data Analysis add-in.

Figure 5-5 shows a portion of a spreadsheet containing the data used for the histogram plot shown in Figure 5-4. 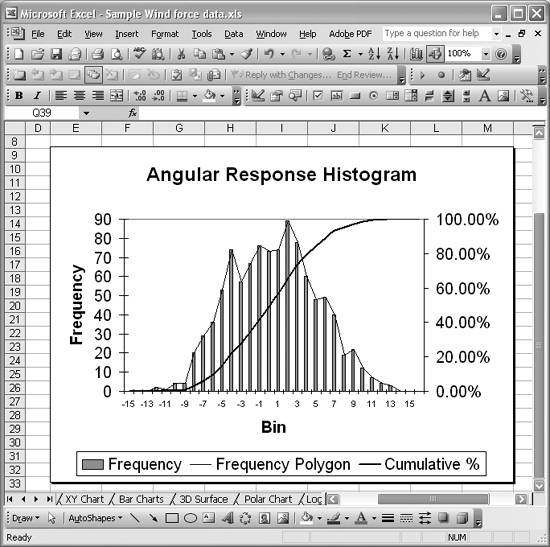 The angular response data contained in column A is the original dataset for which frequencies are computed. Before applying the FREQUENCY function, you must set up a range of discrete bin values, called bins. The bins form bands, or ranges of values, within which values in the original dataset will be lumped when compiling frequencies of occurrence. In this example, I know the angular response values fall within approximately -15 to 15 degrees; therefore, I set up a range of bin values from -15 to 15 degrees in increments of 1 degree. These are contained in column C in Figure 5-5.

To compute the frequencies for each bin, I applied the FREQUENCY formula, passing the dataset cell range as the first parameter and the bin cell range as the second parameter. For example, the formula in cell D5 is {=FREQUENCY($A$5:$A$1005,$C$5:$C$35)}. Notice that this is an array formula and to enter it you must first select the entire output cell range, cells D5 to D35 in this case, and then enter the formula by pressing Ctrl-Shift-Enter. 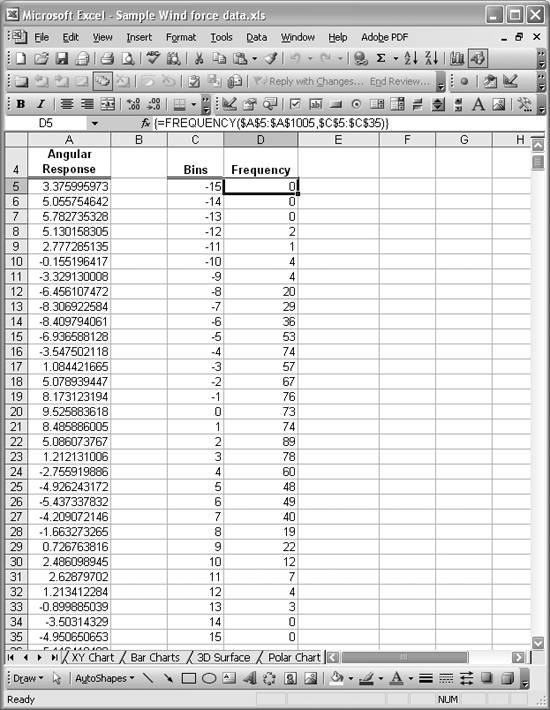 You can compute such a frequency distribution using the Histogram tool instead of the FREQUENCY function if you'd like. To do so, select Tools

Then select the Histogram tool from the list of available tools and press OK to open the Histogram dialog box shown in Figure 5-7. 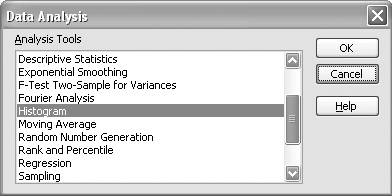 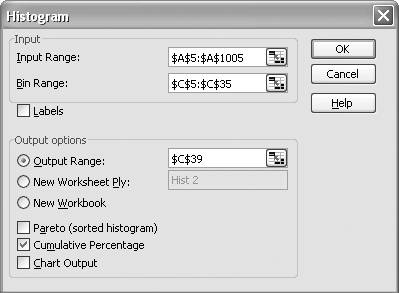 Under "Output options," select your preferred location for the output. In Figure 5-7, I set the output range to start at cell C39 in the same worksheet that contains the original dataset.

There are a few other options you can choose, and in this example I chose the Cumulative Percentage option to generate values for the cumulative plot shown earlier in Figure 5-4. Upon pressing OK, you should see results similar to those shown in Figure 5-5.

Check out Chapter 4 to learn more about creating charts in Excel.