Of all of the various systems in a home, the one that people can’t seem to live without is the telephone system. So when problems develop, even minor problems can seem like an emergency. Your ability to diagnose, troubleshoot, isolate, and resolve a problem on a home’s communication system becomes extremely important to restoring the home’s ability to communicate with the outside world.

This chapter is focused on identifying the problems common to home communication systems and the methods and tools used to resolve these problems quickly and efficiently. The good news is that in a structured wiring environment, many of the processes used are the same used to troubleshoot wiring and connection problems for most of the other systems in a home. As a home technology integration professional, you must know which troubleshooting process is used to identify and isolate each type of problem.

Basic telephone wiring is a four-wire cable that actually consists of two pairs of wire. As shown in Figure 28-1, the wires in the incoming telephone wiring connected into the NID are green, red, black, and yellow. The green and red wires are treated as one pair and the black and yellow wires are treated as another pair. Each pair of wires carries the tip and ring signals used by a telephone to connect and communicate. As shown (Figure 28-1), the green wire is the tip wire in pair one and the black wire is the tip wire in pair two. The red and yellow wires provide the ring link in each pair, respectively.

Figure 28-1: The wires in a four-strand telephone wire (quad wire)

The NID is usually located on an outside wall of the house. At the NID (see Figure 28-2), each incoming line uses one of the two pairs in the telephone cable and if only a single line is entering the home, by telephone company standards, the red and green wires are connected to the point where the CPIW attaches to the NID. If a second line is provided, then the yellow and black wires are also connected. However, when connecting a second line, the black wire is treated as if it were green and the yellow wire as if it were red. If more than two lines are entering the home, the incoming wiring is likely to be Cat 3 cable with its four wire pairs. See Table 28-1 for color-coding of wiring. 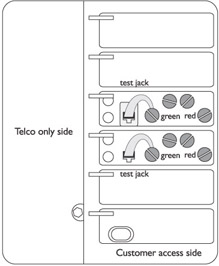 Figure 28-2: In the NID, each incoming telephone line is connected separately.

One wiring problem you might run into inside the NID is that in situations where the red or the green wires have become damaged, the black and yellow wires may have been used to replace them instead of installing a new run of quad wire back to the distribution point. If you encounter this, and a second line is being installed, the phone company will need to replace their service line with a good four-wire cable.

Cat 5 and the NID

When Cat 5 wiring is connected to an NID, there are no red, green, yellow, and black wires to use, only blue, orange, green, and brown. If one or more lines in a home are having connection problems, the problem may be wiring inconsistencies at the NID.

Each of the four wire pairs in a Cat 5 cable can be used to replace the green and red (tip and ring) wires required for the connection. Table 28-1 lists the wire color replacement convention when using Cat 5 in place of quad wire. As you can see, the white striped wire in each pair replaces the “green” wire (tip) in the telephone convention and the solid color wire in the pair replaces the “red” wire (ring).

The order and assignment of the Cat 5 wire pairs listed in Table 28-1 should be used throughout the home communications system. It is very important to use the same wiring scheme throughout a system to ensure conformity and consistency, since this can eliminate at least one potential problem when you have to troubleshoot the system.

If a telephone line is dead on all inside telephones as well as at the structured wiring distribution panel, the problem could very well be with the incoming telephone line. To troubleshoot the connections in the NID, follow these steps:

If a telephone line is working at the NID, but not inside the home, the problem is most likely a wiring problem somewhere between the NID and the structured wiring panel or the telephone outlets (assuming you’ve already checked the handset and the telephone patch cord connecting it to the outlet).

The best way to troubleshoot exactly where the problem may be is to connect a handset to each connection point along the cable path. When you find the point where there is no dial tone on the phone, you can then begin to determine why that link is not working. Some common problems on the faulty link to look for are

If a homeowner is complaining about hum, static, or that conversations on one of a home’s telephone lines can be heard on another, the issue is likely in the wiring somewhere.

Here are some common wire issues that can create noise on a telephone line:

When a second phone line is added to an existing telephone system, the outlet jacks and wiring blocks are commonly overlooked. If the original installation didn’t provide wiring blocks and jacks that were pre-wired for two or more lines, the wiring connecting the second line to the outlet is virtually dead-ended. Whenever installing new wiring, be sure to terminate all wires and connections.

If a phone line isn’t working for only a single outlet or handset, check the termination of the home-run cable at the wiring block or structured wiring panel and into the jack. An RJ-11 plug will connect into an RJ-45 jack. So, verify that the RJ-45 jack has been terminated for a telephone connection and not a data network connection. Use Table 28-1 from earlier in the chapter and the information in Chapter 13 to differentiate these connections.

If a Home Phoneline Networking Alliance (HomePNA) networking system is installed on telephone circuits that are still in use for voice communications, problems with line noise on the circuit can greatly affect the performance of both the data network and the telephone system.

In addition to correcting the interference and noise issues listed earlier in the chapter, you may also need to install a low-pass filter between the computers and their HomePNA connections.

The cable conditions that can impact the performance of a home communications system are the same as those that can affect all other systems connected to the structured wiring system.

A telephone circuit carries electrical currents in various voltages that are also present in any connectors and terminal screws. If the phone line you are working on is connected through to the NID and a call comes in on that line, you could get an electrical shock.

Here are some tips for working safely on a telephone circuit:

The telephone company’s responsibility for problems on a home communication system ends at the demarcation point or network interface device (NID) of a home. Beyond the NID, the telephone wiring is customer premise inside wiring (CPIW), and is the responsibility of the homeowner.

Basic telephone wiring is a four-wire cable (also called quad wire) that has green, red, black, and yellow wire. The green and red wires are treated as one pair and the black and yellow wires are treated as another pair. Each pair of wires carries the tip and ring signals used by a telephone to connect and communicate. The four wire pairs of a Cat 5 cable can be used for the tip and ring wires of the telephone connection.

The testing tools that should be used to troubleshoot the cabling of a communications system include: cable certification tester, multimeter, telephone test set, TDR tester, and wire map tester.