There are several PC-based home automation controllers that can be used to integrate home control system technology, especially for powerline control (PLC) and Home Phoneline Networking Alliance (HomePNA) systems. However, using a PC as a stand-alone controller integrated into these systems is not what is meant by integrating a home network into the home automation system.

This chapter covers interconnecting the home data network, its computers, and peripheral devices and the whole-house control system to the outside world via the Internet.

Interfaced Is Not Always Integrated

Just because a device provides an interface to another device or a cable connecting to another device, doesn’t mean the devices are integrated. When two devices are connected using common cable or wire, the devices are interfaced. However, to be integrated, the devices must have onboard functions that support a specific communication between the devices using a common coding system or protocol. In a typical home automation system, the home system controller provides integration support, but it can be distributed to local controllers and, in some cases, to specific devices themselves.

A home PC and some specialized software can be used together to control and command a distributed home automation system. On these systems, software running on a PC allows the user to set up zones and areas for controlling audio, video, lighting, and other home systems. The PC communicates to these types of systems typically through a serial, Universal Serial Bus (USB), or IEEE 1394 interface to a signal converter device that provides transceiver services to the distributed controls and modules of the system. For example, a PC running software to control an X-10 lighting control system transmits its signals through either a serial or USB port to an X-10 interface module that transmits and receives signals to and from the electrical wiring of the home.

The first step involved with connecting the data network to the home automation network is of course connecting the cabling or media of each system. After the physical connection is made, the signal format of the two systems must be converted in either direction to allow the systems to communicate. Typically, the home data network is installed on structured Cat 5 or Cat 5e unshielded twisted-pair (UTP) cabling, on one of the wireless media standards (IEEE 802.11a, 802.11b, or 802.11g), and operates on Ethernet protocol. To connect the home automation controller to the home network, the controller must have a compatible jack or transceiver to operate on an Ethernet network. 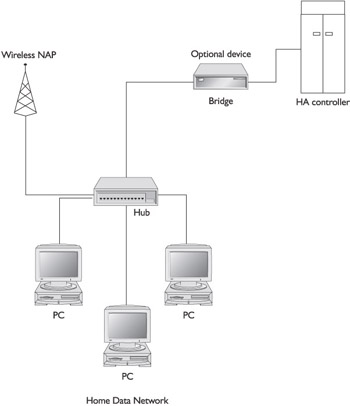 However, to achieve true integration of a home controller into the home network, the two systems must speak the same language. Just like two people who don’t speak each other’s language will have trouble communicating, integrating an Ethernet data network to a proprietary home automation controller can prove troublesome.

In some cases, this may mean that a signal converter or bridge must be used between the two systems, such as an Ethernet to serial bridge, an Ethernet to RS-485 converter, or an Ethernet to PLC module. The bridging device shown in Figure 41-1 is only necessary in cases where the Ethernet/TCP/IP data network link must be converted to an Electronic Industries Alliance/Telecommunications Industry Association (EIA/TIA) 232, 422, or 485 serial format for use by the home automation controller. In cases where the home system controller has an RJ-45 jack and is able to connect directly to the Ethernet/TCP/IP link, an external bridge is not needed.

Another interface technology that can be used to integrate a computer network and home automation controllers is the controller-attached network (CAN) protocols. CAN is a serial bus system designed to interconnect smart devices into smart systems and networks.

In addition, if the Home Automation Telephone Interface (HATi) protocols are in use, a link to the home automation controller can also allow the telephone system to be controlled from a PC, including placing and receiving telephone calls to any line in the home.

The bottom line is that someday everything will be an Ethernet/TCP/IP enabled device. That is where the future is going, just read on.

The Future of the Connected Home

This book has covered all the parts that lay the foundation for a connected home: structured wiring, home networking and of each of the subsystems that can be installed in the home (audio; video; lighting; telecommunications; Heating, Ventilating, Air Conditioning or HVAC; water management; security; and access control and other automated devices). It has discussed controls for these systems and integrating the systems under a whole-house controller. The benefits behind a connected home exist: the system offers efficiency, convenience, safety, financial savings, and ease of use.

The real advantage of a networked and integrated controlled home is yet to come. When the home is connected to the Internet, the options are endless. This trend has already started with the introduction and rapid adoption of IP-addressable devices.

With the Ethernet protocol becoming prevalent in the home, new IP-addressable devices are coming on the market. These include digital cameras, digital media servers for both audio and video content, and digital art and picture frames, to name just a few.

A Web-enabled product is first and foremost an IP-addressable product that is able to communicate directly over an Internet connection. These devices include extra hardware and software that gives it the capability to transmit and receive Hypertext Transfer Protocol (HTTP) messages. HTTP is the primary data transfer protocol of the World Wide Web (WWW) or, as it is better known, the Web.

The primary benefit of a Web-enabled device is that it can be viewed, controlled, or configured over a Web connection. This capability gives not only the installer but also the homeowner the opportunity to connect over the Internet with a device to control its function, settings, and status.

More and more home networks are becoming wireless. New wireless solutions work over existing wiring in the home such as coaxial cable, telephone, and electrical wiring. As the wireless Ethernet standards, 802.11a, 802.11b, and 802.11g, gain acceptance in the home market, more devices are emerging with wireless communication capabilities. In the future, other mediums may be delivering services to the home, such as the electrical powerline coming into a home also carrying broadband data communications services.

Home networks are becoming more prevalent and more and more devices are becoming IP-addressable. The Internet is a necessity in life at home and inter-connectivity of systems and devices in the home is occurring. Figure 41-2 shows a home system that incorporates nearly all of the subsystems discussed in this book. 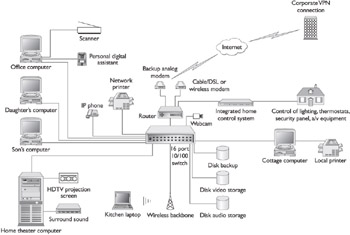 Figure 41-2: A diagram of a comprehensive integrated home network

Two devices that are connected by a cable or wire are interfaced. To be integrated, the devices must share a specific communication method and a common coding system or protocol. Integration may require a signal converter or bridge between the two systems. A bridging device is used in cases where the signal format between the devices is different and the signals must be converted for each device to communicate with the other. An interface technology that can be used to integrate a home computer network with a home automation controller is a CAN.

The full advantage of a networked and integrated controlled home may still be in the future. Connecting the home to the Internet provides virtually endless options. As IP addressable products, Web-enabled products, and wireless networking products continue to emerge, they add additional functionality and capabilities to home networks and home automation systems.