At the heart of an integrated home automation system is the controller. It is like a conductor of an orchestra, directing when each instrumental section plays, how loud or soft they play, and so on. In a similar manner, the controller of a home automation system directs when each subsystem is activated and provides its settings, such as the volume, operating patterns, and the like. The home controller creates the total experience for the occupants of the home, just as the orchestra creates the total experience.

A home automation controller is the integrator of the independent systems in the home. It pulls the home’s subsystems into a single integrated system and through its control settings and programming manages a home’s total environment.

The primary feature of any home automation system controller is control. More specifically, this means the controllers capability to interface, interact, and communicate with the different subsystems in an automated home.

The true benefit of installing a controller in a home system is that it consolidates the functions of the separate subsystem controllers into a single interface for the homeowner. In home subsystems such as lighting control systems, Heating, Ventilating, Air Conditioning (HVAC) systems, security systems, distributed audio/video systems, and any other systems a home may have installed, each usually has its own separate controller with unique user interfaces. Often, the convenience gained from each subsystem is lost in the complexities, and possible overlapping, of the controls.

Integrating the subsystem controls into a single home control system means there is only one user interface for the homeowner to learn. For example, a single button on a room controller might dim the room lights, turn on the audio, turn up the room heat, and turn on the outside lighting. Or a button labeled “Outta Here” could turn down the heat, lower the house lighting, and arm the security system. With independently controlled subsystems, each of these actions would require the homeowners to take several steps; they would need to remember each step instead of using a single button, leaving nothing forgotten. The capability to set whole house environmental scenes through the push of a single button is perhaps the biggest advantage a controller-based home automation system provides.

Hardware and Software Based Controllers

Hardware-Based ControllersHardware-based controllers are specialized devices with a microprocessor for processing inputs and providing control. They are equipped with relays, input and output jacks, a variety of optional communication ports and have embedded processors to provide stand-alone functionality for the home control system.

Hardware system controllers provide a variety of features, including:

Several types of home control system software are available that can be installed on a PC and connected to the home network, be it the power line control (PLC) type or Ethernet home network.

Many of the home automation control software products available are designed to work with Ethernet networking, regardless of the transmission media or technology in use. Some are specific to certain media, such as PLC, but the better systems are designed to work over any hard-wired home network operating on Ethernet protocol.

PLC software products interface to the AC powerlines using Electronic Industries Alliance/ Telecommunications Industry Association, or EIA/TIA (RS) 232 or 485 serial interfaces and typically use a DB-9 connector or a USB interface. Using one of these serial connections, the PC is connected to a PLC interface that provides the link to the AC electrical lines and any other PLC devices connected to the AC system. Some software control systems provide an IR interface to allow the PC to control devices with a line-of-sight connection.

Two-way communications are used to send or receive command requests to and from subsystem controllers and room control devices and then to transmit command signals and status information to these same devices.

When the controller issues commands to a subsystem controller, it must use the signal format and coding scheme understood by the subsystem. Most robust control systems are able to communicate in a variety of ways including relay/contact closure, IR, RF, RS-232, RS-485 and TCP/IP. So, in some ways, a home system controller also acts as a translator and interpreter between the various components and subsystems connected to it.

Hard-wired control systems are the most reliable type of communications links that can be used to connect a system controller to subsystems and room controls. However, they usually work on proprietary communications protocol. In addition, they are usually the most expensive of the available options.

Most hard-wired systems communicate over the Cat 5e cabling installed as a part of a structured wiring system or over a proprietary cabling system. The controller can be connected to the network cabling using two primary methods: using a network adapter that is either built into the device or available as an add-on module (see Figure 39-2) to the controller or through a connection made in the distribution panel (see Figure 39-3).

Figure 39-3: An illustration of how a hard-wired home system controller connects into a home’s structured wiring

Another advantage of a hard-wired control system is that it is able to perform multiple tasks at one time. Because of the data speeds supported by unshielded twisted-pair (UTP) cabling, a hard-wired system is able to communicate at a faster data transfer speed and still maintain its reliability. Hard-wired systems are best installed during new home construction, as they are difficult to install with the necessary wiring as part of a retrofit or remodel project.

A variation on the hard-wired approach to communications in a home control system is an Internet Protocol (IP) control system. IP control systems interconnect the home system controller and the room controls into the home computer network (see Figure 39-4) to create what amounts to a home intranet that is called a controller-attached network (CAN). An intranet is a network contained within a home, as opposed to an Internet, which extends way beyond a single home.

Figure 39-4: An illustration of a home system controller connected to a home computer network.

On an IP control system, the communication protocol is Ethernet-based TCP-IP. Each device connected to the network is assigned an IP address and the network communicates with it using that address.

Perhaps the most affordable type of home control system is powerline carrier control (PLC) systems, which are more commonly known as X-10 or CEBus. PLC uses a home’s existing AC powerline to communicate.

The heart of a PLC home control system is its network control unit (see Figure 39-5), which serves to integrate and control the various PLC units and modules. A variety of PLC system controllers are available ranging from software for PC to stand-alone controllers. And PLC systems are easy to install, because the network media is already installed in the walls of a home (the electrical wiring). Here’s an overview of the advantages of PLC communications advantages, along with the disadvantages. 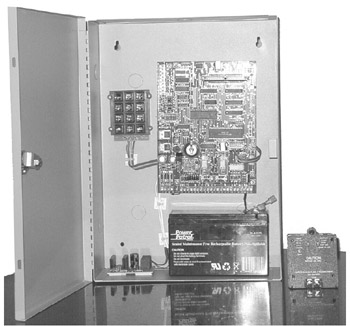 The advantages of PLC communications are

However, there are some disadvantages as well:

In spite of its disadvantages, PLC can be used in certain situations fairly effectively, such as controlling light fixtures and electric devices in a single room or smaller-size home (less than 2200 square feet).

The IEEE 802.11b standard, also known as Wireless Fidelity (Wi-Fi), is a wireless communications standard that operates in the 2.4 GHz RF band. The 802.11b offers up to 11 Mbps of bandwidth in a range of around 150 feet indoors. At the present time, 802.11b is the most commonly used wireless networking standard. Table 39-1 lists the characteristics of the wireless networking standards on the market.

The advantages of wireless networking include the elimination of cabling between a remote control device and the system controller, and the portability provided by the lack of wiring. Another advantage is that the system is fast enough to provide bandwidth to overcome most interference problems, which are highly probable.

The disadvantage of wireless networking is its operating frequency. All of the 802.11 standards, and the Bluetooth standard, operate at 2.4 GHz, the same frequency used by many cordless phones, some garage door openers, baby monitors, and other wireless products commonly found in a home. In addition, wireless digital subscriber lines (DSL), or wireless Internet access to a home, also operates on this frequency. So, the possibility for interference is real, but as mentioned earlier, the bandwidth and data speeds are high enough that in most cases, interference can be overcome, though it’s not always true in all cases.

Figure 39-6: A home system controller in an RF wireless network relays signals to subsystem modules and devices over the integrated wiring system.

When installing a home system controller, there are some basic steps you should followed to ensure the control system meets the needs of the homeowners and the installation goes efficiently. On all systems, you should work on much of the system configuration prior to visiting the site for installation and setup. The programming needs to be done very carefully. It is much more effective to find the problems and resolve them at the workbench then out in the field. Troubleshooting on-site is inevitable, but you want to keep it to a minimum.

On many systems, modifications can be made without the need for a house call, or what the communications people call a “truck roll.” On systems that provide remote access, most problems or minor changes can be done by accessing the system through a modem or over the Internet and gaining access via a security code (which should be kept top secret at all times). A house call should be necessary only for major reconfigurations of the system or hardware problems, and if the system has been properly installed to the homeowner’s wishes, it shouldn’t be a common occurrence.

Hardware-based controllers are specialized devices with a microprocessor for processing inputs and control. They are equipped with relays, input and output jacks, a variety of optional communication ports, and have embedded processors to provide stand-alone functionality for the home control system. Many home automation control software products work with Ethernet networking, regardless of the media in use, although some are specific to certain media.

When installing a home system controller, some basic steps should be followed to ensure the control system meets the needs of the homeowners and the installation goes efficiently. The steps that should be used to set up and configure a home system controller are: interview the homeowners, set up control devices and programs, program macros and scenes, design and create user interfaces, install the controller, connect communications links and test local controls, perform acceptance testing, and provide system maintenance.