We don't attempt to cover every class and interface within the framework. Instead, we present a subset of the components that will help you understand how Quartz does what it does. Figure 4.1 shows a compacted class diagram for the essential Scheduler components. 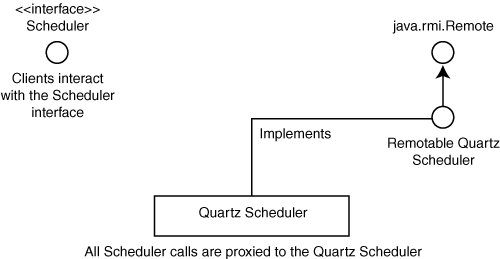 The QuartzScheduler is at the root of the framework and is the engine that drives the entire framework. Not all of the functionality is built directly into the QuartzScheduler, however. The framework has been designed to be flexible and configurable so that many of the important functions are carried out by separate components and subframeworks. This means that Quartz users can substitute their own versions of certain key features for the default ones. Still, even though the QuartzScheduler delegates some of its responsibility, it is still in charge of the overall process of scheduling.

Clients can interact with two types of Schedulers, shown in Figure 4.2. Both implement the org.quartz.Scheduler interface. 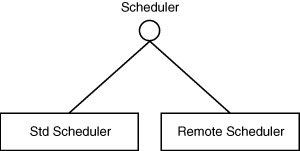 As a Quartz user, you interact with the classes that implement the org.quartz.Scheduler interface. Before you can invoke any of its API, you need to know how to create an instance of the Scheduler.