This example application is a little more interesting than the proverbial System.out.println("Hello World from Quartz"). When Quartz executes a job, we expect it to perform some interesting and useful task on our behalf. That's what we are going to do heresomething useful and interesting.

This chapter shows you how to create a Quartz job that, when told to do so by our Quartz application, will scan a specified directory and look for XML files. If it finds one or more XML files within the specified directory, it will print some cursory information about the file. How is this useful and interesting, you say? Hopefully, you can make the leap that after your job detects certain files in a directory, it can do many interesting things with those files. You might want to ftp them to a remote host or e-mail them as attachments. Perhaps the files are orders that were sent from a customer and need to be inserted into your database. Infinite possibilities exist; we discuss some of the more interesting ones later in the book.

All attempts have been made to keep this new material straightforward and to cover only the essentials. However, we also investigate some of the common configuration settings that affect the runtime behavior of a Quartz application. It's expected that you know the Java language well; we spend very little time explaining the standard aspects of it.

Finally, this chapter wraps up with a brief discussion of how to package the example application. Apache Ant is our choice for building and packaging Java projects: Quartz applications are no exception.

Setting Up the Quartz Project

The first step is to set up your development environment for this project. You can choose any development tool or IDE that makes you feel warm and fuzzy; Quartz won't hold it against you. If you're part of the growing mass of Java developers that have realized just how great Eclipse is, you'll be extra warm and fuzzy: We use that IDE throughout the examples in the book.

If you haven't already done so, you can download Eclipse from http://eclipse.org. You can choose any of the 3.x. For Eclipse documentation, check www.eclipse.org/eclipse/index.html; you should find everything you need to help you get started with Eclipse.

For the examples throughout this book, we create an Eclipse Java project; each chapter contains a separate source directory. Figure 3.1 illustrates the Quartz Java project in Eclipse. 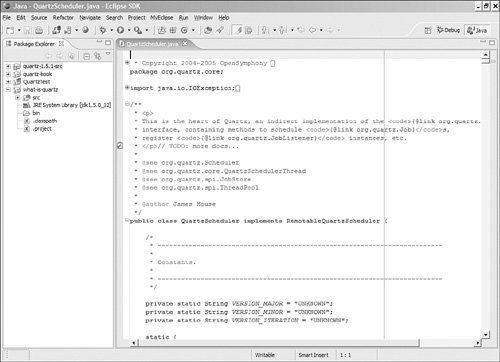 You need to import several JARs into the project to build them successfully. To start, you need the Quartz binary, which is named quartz-.jar. Quartz also requires several third-party libraries to work; the ones you need depend on which features of the framework you're using. For now, you should include the Commons Logging, Commons Collections, Commons BeanUtils, and Commons Digester libraries, found in the /lib/core and /lib/optional directories. Table 3.1 provides more information on the dependent JARs for Quartz.

It's also a good idea to pull the Quartz source code into Eclipse. This does two things for you. First, it enables you to set breakpoints and step from the code into Quartz source. Second, it helps you learn the framework from the inside out. If you need to see how something is (or isn't) working, you have the actual code right there at your fingertips. Try that with commercial software!

Every Quartz job must have a concrete Java class that implements the org.quartz.Job interface. The Quartz job interface has a single method, execute(), that you must implement in your job. The execute() method signature is shown here:

You can perform whatever business logic you need within the execute() method: For example, you might instantiate and call a method on another class, send an e-mail, ftp a file, invoke a Web Service, call an EJB, execute a workflow, or, in the case of our example, check to see if files exist in a particular directory.

Listing 3.1 shows our first Quartz job, which is designed to scan a directory for files and display details about the files.

Let's take a closer look at what's going on in Listing 3.1.

When Quartz calls the execute() method, it passes it an org.quartz.JobExecutionContext, which wraps many things about the Quartz runtime environment and currently executing job. From the JobExecutionContext, you can access information about the Scheduler, the job, the trigger information for the job, and much, much more. In Listing 3.1, the JobExecutionContext is used to access the org.quartz.JobDetail class. The JobDetail class holds the detailed information about a job, including the name given to the job instance, the group that the job belongs to, whether the Job is persistent (volatility), and many other interesting properties.

The FileExtensionFileFilter is not part of the Quartz framework; it's a subclass of the java.io.FileFilter, which is part of core Java. We have created the FileExtensionFileFilter as part of our example to filter out everything but XML files. This is quite handyyou should think about building a set of file filters for your application and reusing them for your various Quartz jobs.

The FileExtensionFileFilter is used to block any file that doesn't contain the string ".xml" as part of its name. It also blocks any subdirectories, which would normally be returned as well from the listFiles() method. Using file filters is a very convenient way of selectively choosing inputs to your Quartz jobs when they involve files as input.

In the next section, we discuss how to configure the job for scheduling and how to run the ScanDirectoryJob.