You're dealing with a parabolic or hyperbolic problem and have developed the finite difference equations for the problem, which includes both discretized spatial and time variables. Now you have to solve these equations.

Use Excel and Solver to solve the finite difference equations in a manner similar to that discussed in Recipe 12.2.

In the previous recipe, I showed you how to leverage Solver to solve the finite difference equations, arriving at a steady state solution to an elliptic-type boundary value problem. You can apply the same techniques to solve time-dependent parabolic or hyperbolic types of problems.

This is a parabolic equation, which can be used to model the time-dependent heat conduction in a metal rod, for example, subject to some prescribed initial temperature distribution and boundary conditions at the ends of the rod.

In this method, both spatial and time variables are discretized. You can set up a finite difference grid similar to that shown in Figure 12-2, where instead of the vertical axis representing the y-dimension, the vertical axis will now represent time. The horizontal axis still represents the x-dimensionthe distance along the rod's length in this case. The finite difference equation shown here assumes that the time step size, Dt, is related to the x step size, Dx, such that Dt =Dx2.

You can solve this problem in a manner similar to that discussed in Recipe 12.2, where I showed you how to solve a boundary value problem using Solver. Figure 12-7 shows the spreadsheet I set up to solve this initial value problem.

The upper table, Finite Difference Solution, initially contains only specified boundary and initial values (nonshaded cells) and initial guesses for the unknown temperature values along the length of the rod (shaded cells). We're going to let Solver alter the values in the shaded cells in the upper table to find a solution.

The shaded cells in the lower table, Residuals-squared, contain the finite difference equation shown earlier for each node. Actually, the square of the lefthand side, the residual, is computed; the idea is to minimize these residuals as discussed earlier. For example, the formula in cell H22 is =(4*H8-I8-G8-I9-G9)^2. All the other cell formulas are similar. Notice that these formulas refer to values contained in the upper table.

Cell D29 contains the sum of all these residual cells. We're going to have Solver attempt to minimize the value computed in cell D29. The Solver model I used for this example is shown in Figure 12-8. 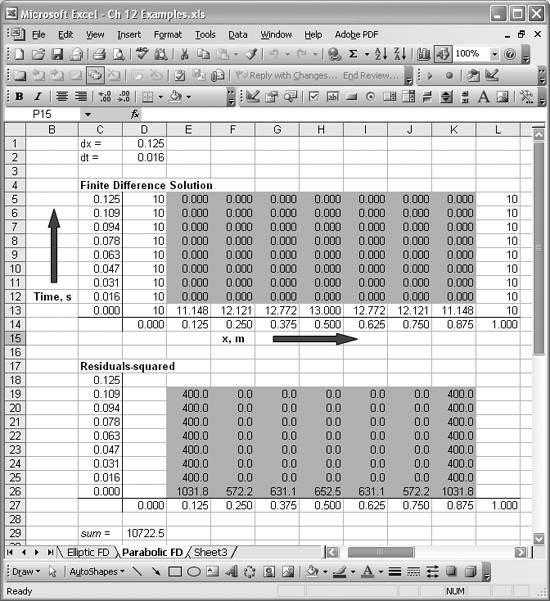 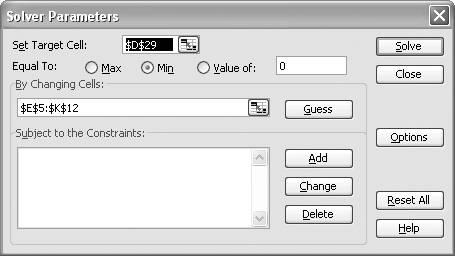 I set the target cell to D29 so as to minimize the sum of squared residuals. The cells to change are all the shaded cells in the upper table of Figure 12-7. The corresponding cell range is E5 to K12. Pressing the Solve button sets Solver going on its search for a solution. After a few seconds, Solver presents the results shown in Figure 12-9. 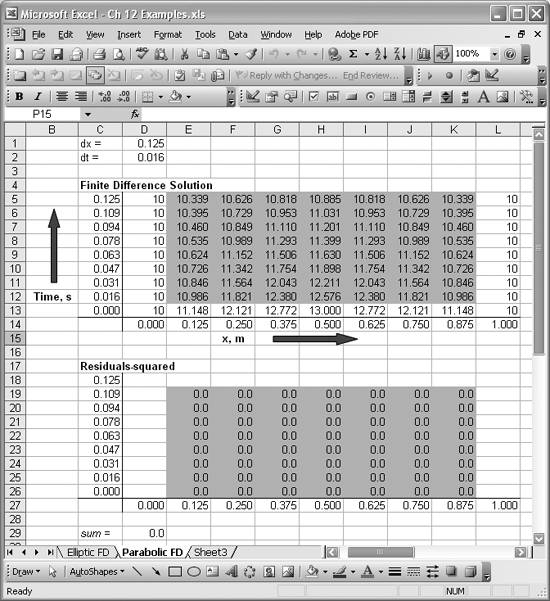 As you can see, all the residuals are 0 and the upper table now contains the solution to this initial value problem. Figure 12-10 shows a plot of these results.

As I mentioned in the previous recipe, the ability to quickly visualize your results in Excel without having to use a separate visualization tool is another compelling reason to use Excel for this sort of problem when possible. Refer to Chapter 4 to learn more about creating charts in Excel. 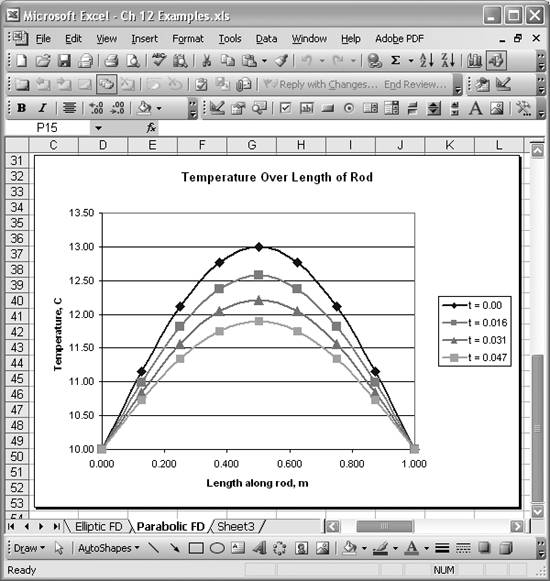